Since the inception of the PEMEX Security, Health and Environmental Protection (SSPA) program in 2005, the frequency rate of PEMEX worker accidents has dropped from 1.5 to 0.29 per million man hours in 2015. As of February 2019, this incident rate had dropped to 0.24, with a 0 rating for fatalities. In this year’s PEMEX Business Plan, the PEMEX-SSPA was praised for heightening standards throughout the company via the application of measures that include weekly technical inspections, the strengthening of the emergency reaction system and the reevaluation of the PEMEX Security and Hygiene Rules 2017-2019

A stronger form of environmental regulation was introduced by ASEA under former Executive Director Luis Vera. Given Vera’s expertise in environmental impact, to regulation and deepened links with governmental authorities, including SEMARNAT, the National Institute of Ecology and Climate Change (INECC) and the Mexican Center for Environmental Law (CEMDA). This year, ASEA also introduced an innovative environmental protection regulation to the industry. This regulation included “dynamic penalties,” which are based on the measurement of the operational impact of projects on the surrounding environment.

ASEA’s new system will evaluate projects on a caseby-case basis and apply sanctions that can evolve if environmental impact broadens. Vera has said that these dynamic penalties are “penalty fees that, instead of being fixed, change depending on case-specific circumstances and environmental impacts. These dynamic penalties also change with time. For instance, a US$1 million fee can become a US$10 million fee, reflecting the fact that environmental damage might be spreading as an ecosystem regenerates itself due to contamination.” These new measures ensure communities close to oil and gas assets receive the environmental protection they require if accidents damage their livelihoods and local area.

Similarly, ASEA made efforts to reduce its operational shortcomings that resulted in industry projects held up while companies went through overly-complicated permitting procedures, which in 2018 required that ASEA authorize 100 permits per project, that had previously annoyed industry players and slowed market growth. Vera says that the performance improvements of the institution are clear. “For the first time in ASEA’s relatively short history, 98 percent of our cases have been delivered on time. This means that the institution is maturing and transforming.”

Luis Vera resigned from his position in late August 2019, and as of October 2019, has yet to be replaced.

The government and SENER faced questions regarding the environmental impact of Dos Bocas considering its location beside a mangrove system. The Environmental Impact Report (MIA) carried out by the IMP and published in July states that while the refinery site area is not in a protected natural area, the location does “present elements of ecological relevance like mangrove communities, bodies of water, wetlands and protected fauna species.” The report found that the refinery’s construction would have 255 separate impacts on the area, of which 56 were adverse, 34 were beneficial and 165 unqualified.

In August, ASEA gave its final authorization for the construction of Dos Bocas refinery, with conditions, after studying its likely impacts. Those conditions included maintaining the hydrological flow of the Seco River that surrounds the site and the reforestation of the Mecoacan Lagoon.

As international standards gain more ground in Mexico’s oil and gas industry, private companies are updating their regulations to be compliant with global requirements. At the end of 2018, Mexico ratified the Convention 98 of International Labor Organization, which translates into higher health and safety standards for all personnel. However, improved health and safety is not the only benefit for operators. Roberto Alejandre, Director of Sales and Services at Dräger Safety Mexico, notes that stronger HSSE practices reduce unplanned downtime and associated costs. “Security must be perceived by operators as a central pillar in the efficiency of their processes,” he says. Many of these are aligned to the general preventative safety approach now common to the industry and which apply to the workforce. Alejandre points to drug and alcohol screening as an example of this trend. “This is an emerging area within our product development that has been proven to play a tangible role in accident prevention by significantly reducing the operation risk involved in dangerous activities.”

Yet there remains work to do before the Mexican industry pulls abreast of the standards in more consolidated markets. One specific point to be addressed, says Eckhard Hinrichsen, Country Manager Mexico of DNV GL, is to have third-party companies providing independent certification for industry regulators. “This is a very important function to ensure that oil and gas activities are performed safely and that the risk to human life and the environment is reduced as much as possible. This has been a good and proven practice for decades in most oil and gas-producing countries, such as those in Europe, Brazil and the US,” he says.

The industry transparency that the Energy Reform delivered has been one of its major successes. Alberto Sambartolomé, from ERM, notes that transparency must continue for the industry to keep moving forward. In this context, independent certifications are one way of doing this. “Major companies and the largest investors are only interested in working in countries where the oil and gas industry complies with the highest standards and where rules are clear. This must be continued because without the help of the private sector, the administration’s production goal will be extremely difficult to achieve,” he says. 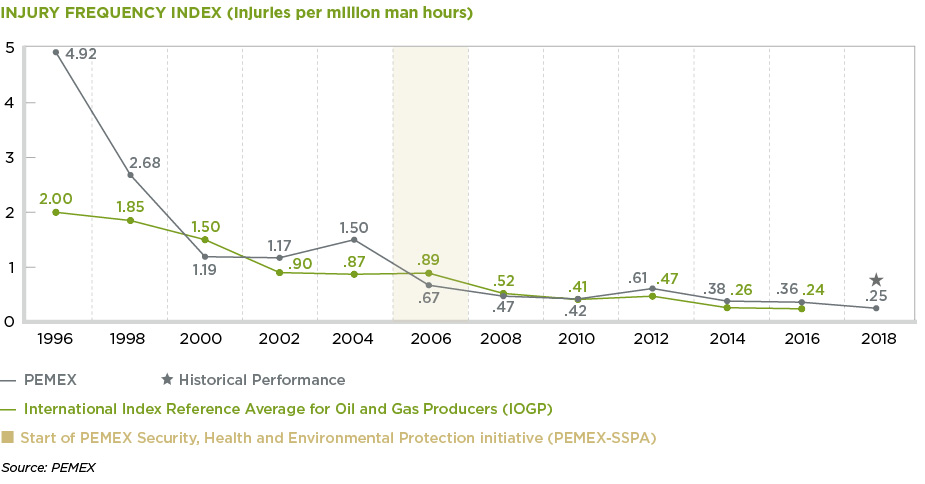