After a successful year for PEMEX in deepwater in 2012, with oil discoveries at Trion-1, Supremus-1, and wet gas at Kunah-1, this year’s focus was building on the exploration achievements of the previous year, proving the extension of oil reservoirs, and advancing with the development work for Lakach. While the company awaited the outcome of the last stages of debate surrounding the Energy Reform, it continued its exploration efforts in the Perdido area and Holok in an attempt to find additional light oil and wet gas. “During the last year, PEMEX was majorly oriented toward deepwater exploration but results for this segment take longer to be reflected as reserves,” says Alma América Porres Luna, Commissioner of CNH, in an attempt to partially explain the decrease in the reserve replacement rate (RRR) during 2013. José Antonio Escalera Alcocer, Subdirector of Exploration of PEMEX E&P, confirms this notion by explaining that deepwater is the longterm component of the company’s overall strategy. “In deepwater, it takes eight to ten years to reclassify reserves as proven, which only happens once all the exploration and appraisal work is complete. We currently have a very strong focus on deepwater exploration, so we are expecting to see a downward turn in the RRR figure for the year,” he states.

However, Fluvio Ruiz Alarcón, Professional Board Member of PEMEX, hints at the fact that this strategy might have been chosen to allow PEMEX to prove its capabilities in deepwater, just when SENER is deciding which exploration areas PEMEX will keep as part of Round Zero. “Even when PEMEX’s course of action had a negative impact on the RRR for the year, it helped to prove its abilities and to reduce geological risk at some potentially rich deepwater areas,” he argues. Under this objective, 3D seismic acquisition projects in deepwater saw important progress during 2013. The Sayab 3D survey for the Han project was finished in September 2013, having collected 8,294km2 of seismic data. The main purpose of this study was to define the area’s geologic horizons, while establishing geophysical models in order to study probable paths of fluid distribution. This was carried out through AVO studies, which analyze amplitude anomalies, and the combination of other seismic surveys, such as gravity gradiometry and magnometry. PEMEX’s objective in characterizing these reservoirs was to quantify risk and to confirm the volumetric extent of the exploratory opportunities spotted in the area.

When it comes to deepwater, Escalera Alcocer admits that PEMEX’s main focus is on the Perdido area. “Our priority continues to be finding light oil in the northern part of the Perdido Fold Belt, where we are delineating our made discoveries and drilling new wells,” he remarks. PEMEX completed three wells in the region during 2013, PEP-1, Maximino-1, and Vespa-1, while a fourth well, Exploratus-1, discovered oil during the first quarter of 2014. The Maximino-1 exploratory well was completed with the West Pegasus drilling rig at a water depth of 2,919m and reached a total vertical depth of 6,621m. These drilling efforts confirmed the existence of an active reservoir containing extra-light crude and gas found within siliciclastic sequences of the Early Eocene Wilcox formation. Escalera Alcocer describes the discovery as a historical breakthrough for Mexico, given the depth at which flowing oil was found. PEMEX already has two semi-submersibles in the area to continue appraisal efforts. Vespa-1 was drilled with the purpose of exploring the area’s surrounding stratigraphy. It was also drilled by the West Pegasus drilling rig in a water depth of 777m, reaching a measured depth of 3,418m and a total vertical depth of 3,415m. The Vespa-1 well ended up being commercially successful as both a crude oil and gas producer. Moreover, it confirmed the existence of hydrocarbon-bearing reservoirs located within mini-basins of the Salina del Bravo province and served to evaluate the potential of Middle Miocene sandstone formations in the area. The initial production of Vespa-1 was 2,366b/d of 24-25°API oil, giving support to the theories of finding medium to light oil in the area. The West Pegasus drilling rig also undertook its third Perdido assignment in November 2013, by starting the drilling operations of the Exploratus-1 exploration well to a water depth of 2,557m. The well is expected to reach a total vertical depth of 5,900m, but it already struck light crude oil at a depth of 3,600m below the sea floor. The purpose of this well was to confirm the extension of the Early Eocene Wilcox and the Oligocene Frio reservoirs located in the Perdido Fold Belt area. 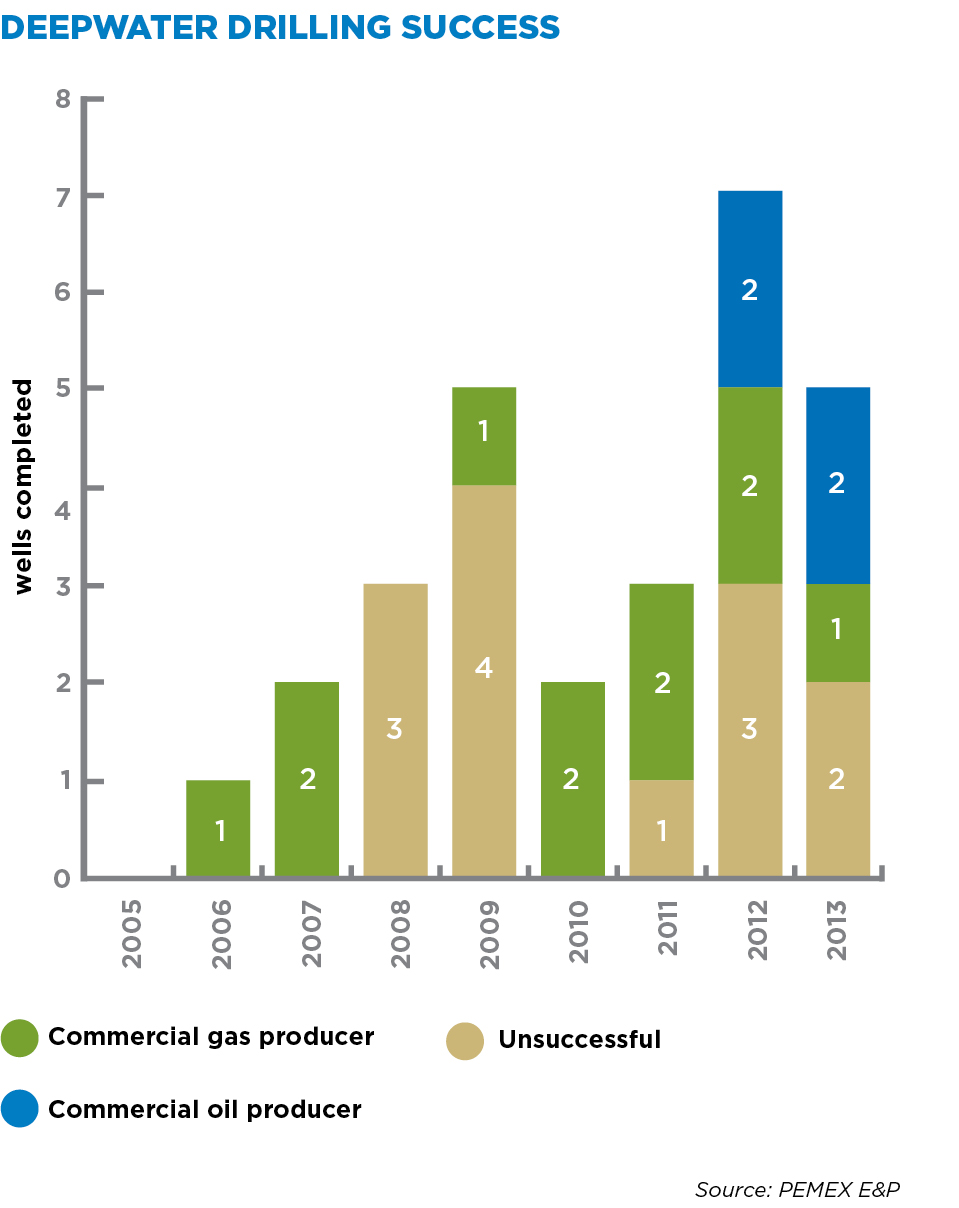 Not every endeavor in Perdido was successful though, as PEMEX drilled the unproductive PEP-1 well. The Bicentenario I drilling rig was in charge of exploration operations at a water depth of 2,919m. It reached a vertical depth of 6,539m before the well was deemed unproductive, as it was invaded by saltwater. However, PEMEX officials still view it as a valuable effort, since the information obtained from PEP-1 enabled the company to calibrate and improve its geological, geophysical, and geochemical models of Eocene and Paleocene plays located within surrounding opportunities. Ruiz Alarcón expands on using failed exploration attempts as additional data to improve the exploration process for the future. “Knowing where not to look is also valuable data. It might not be reflected in the end-year figures of reserve incorporation but it provides us with valuable information to analyze and use in further exploration operations.” To advance the E&P process for PEMEX’s earlier discoveries, the oil company is also focusing on delineating the Trion field, with the Trion-1DL well that was started in 2013. “We are appraising the main discoveries made so far and are moving ahead with development plans to turn prospective resources into possible reserves, and possible reserves into probable and proven reserves,” states Escalera Alcocer. The Trion-1DL exploration well is drilled by the semisubmersible Bicentenario drilling rig in a water depth of 2,565m and is expected to hit a total vertical depth of 4,729m in 2014. The Trion-1DL well serves to delineate the Early Eocene reservoirs in the Wilcox formation in order to give certainty for the field’s development.

Deeper south in the Gulf of Mexico, PEMEX continued its exploration efforts in the wet gas mega-province found within the Cordilleras Mexicanas and the Catemaco Fold Belt. Exploration endeavors here have focused on quantifying the area’s potential. Within the Holok project, both the Ahawbil-1 well and the Piklis-1DL well were completed. Ahawbil-1 was drilled by the Centenario drilling rig at a water depth of 1,930m to a total vertical depth of 5,700m. Even though the well found wet gas, it turned out to be a non-commercial producer. However, the well confirmed the presence of reservoirs located within Early and Late Miocene plays. On the other hand, the Piklis-1DL was completed by the Muralla IV drilling rig at a water depth of 1,777m, and to a measured depth of 4,725m below rotary table. As it resulted in a wet gas producing well, the Piklis-1DL well helped to delineate the surrounding Early Miocene wet gas reservoirs, initially discovered by the Piklis-1 exploration well. The uncertainty encompassing the volume of Piklis was reduced by defining the gas-water contacts, allowing the reclassification of a significant amount of 3P and 2P reserves to 2P and 1P reserves. During October 2013, Muralla IV also began drilling operations for the Yoka-1 exploration well at a water depth of 2,087m. This well, which is expected to reach a measured depth of 4,573m, highlighted several breakthroughs achieved by PEMEX and its contractors. Baker Hughes helped PEMEX achieve new milestones in deepwater operations, using several of its technologies to reduce drilling time and save costs for the Mexican oil company. Since Yoka-1 is meant to survey surrounding statigraphy, its main purpose was to prove the northward extension of the hydrocarbonproducing Miocene plays in the Holok project.

Escalera Alcocer believes that, with ensuing exploration operations, PEMEX can consolidate its knowledge of the Catemaco Fold Belt gas region, enhancing opportunities to add to Mexico’s deepwater reserves. He also believes that success can be expected from exploratory efforts at the deepwater segment of the Salina del Istmo province. As the Perdido Area project continues to be the focus of PEMEX’s deepwater efforts, Escalera Alcocer reveals that the company will focus its subsequent endeavors on the subsalt area and towards the mini-basins region, near Cuencas del Sureste. Pending the results of Round Zero and subsequent licensing rounds, PEMEX has a lot of confidence in the deepwater segment, where the company is willing to partner with IOCs and other international experts. “PEMEX is looking to ally with top-tier companies to gain knowledge and expertise about deepwater,” says Ruiz Alarcón. “We will be looking at companies that are sufficiently good in their technical capabilities, have the necessary financial leverage, and can offer certain intangible benefits that help PEMEX’s further development.”