About 50% of the reserves PEMEX has discovered in the past three years are located in deepwater. José Antonio Escalera, Subdirector of Exploration at PEMEX Exploration & Production (PEMEX E&P), says this is the reason why PEMEX is incorporating a limited amount of proven reserves from exploration activities. However, these deepwater reservoirs are considerably larger in terms of possible reserves. “It is important to mention that the main mechanisms of reserve reclassification from probable to proven reserves are related to field development activities, not from exploration activities,” Escalera asserts.

There is a notable difference between PEMEX’s exploration activities in 2013 and 2014. In the earlier year, the oil company drilled 38 exploration wells with a success rate of 61%, whereas in 2014, it completed 14 exploration wells with a 33% success rate. Although the difference might seem discouraging to some, Escalera claims 33% is a standard success rate according to international benchmarking. In addition, success in exploration activities is measured in periods of three years because of the risk implied and because projects are completed at different paces. This is also the reason why PEMEX divides its exploration projects in three categories: mature onshore fields, shallow waters, and deepwater. Escalera claims that mature onshore areas provide several advantages, as there is more knowledge available and infrastructure is already in place to minimize the time to first oil. Although there is infrastructure for shallow water developments, these take longer to kick off due to the surrounding conditions, with an average time of four years. PEMEX E&P had more aggressive plans for 2014 in terms of conventional plays. Unfortunately, SENER and CNH did not approve these projects because the authorities, explains Escalera, had other priorities due to the Energy Reform. Out of the 30 wells PEMEX planned to drill in conventional plays, only 18 were completed. The company started to explore deeper and more complex reservoirs in the southeast region, both onshore and offshore. These are wells as deep as 6,500-7,000m where PEMEX faced several mechanical complications. In addition, PEMEX encountered wells with high pressure and temperature, and adverse meteorological conditions delayed the completion of several wells. In the Southeastern Basin the drilling of the Tlacame-1 well for heavy crude oil, the Santuario-401 well for light crude oil, and the Arroyo Zanapa-201 well for light crude oil led to a better understanding of the production potential of the Southeastern basin. There were also important activities in deepwater, such as the favorable well logs recorded at the Exploratus-1 well, which confirmed the production potential of this deepwater region of the Gulf of Mexico. In Escalera’s view, PEMEX has been doing quite well in the deepwater segment over the past three years. In 2014, PEMEX E&P delineated Trion, Tsimin, Kunha, and Xux. The latter was more difficult than expected so PEMEX acquired seismic data to better understand the reservoir at greater depths. In general, PEMEX has made substantial investments in delineation activities. “The largest discoveries have already been delineated or are scheduled to be. Some discoveries remain to be delineated but it is necessary to allocate separate budgets for adding new reserves and for reservoir appraisal,” says Escalera. Moreover, through the drilling of the Nat-1 and Hem-1 wells, PEMEX continued to quantify the production potential of gas formations in the Catemaco Fold Belt. 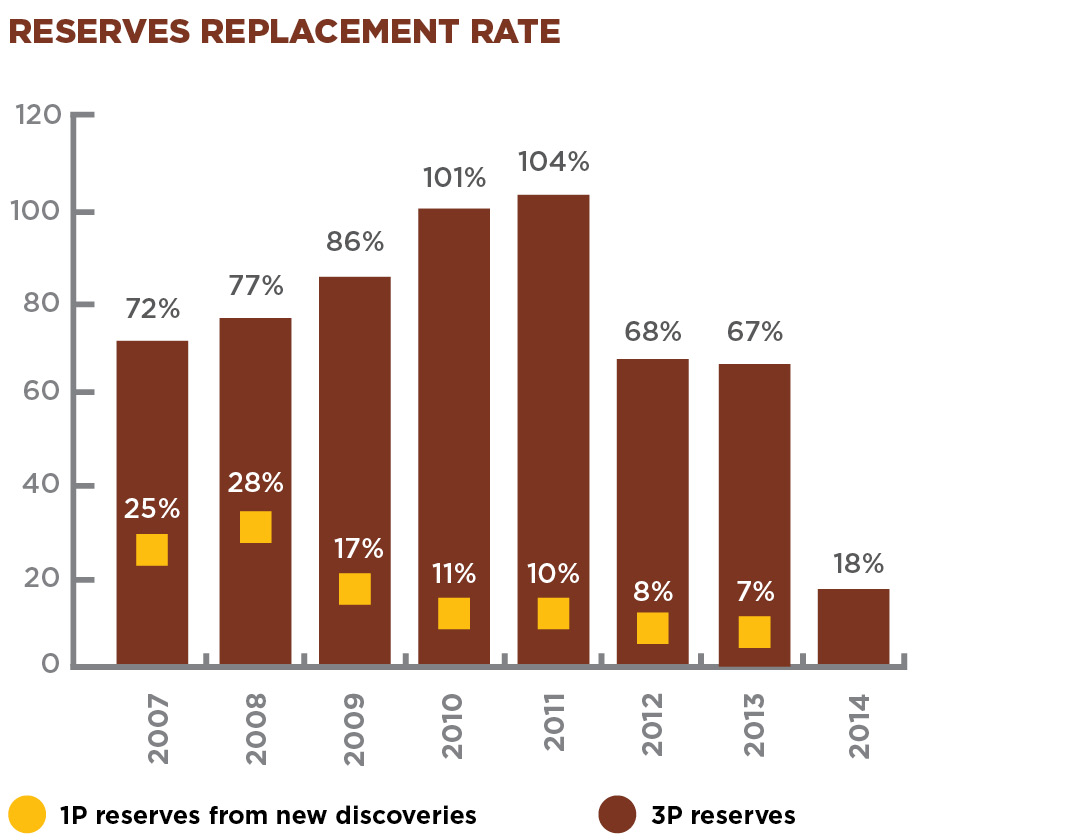 PEMEX only drilled four out of the 30 wells it had planned in Burgos. The other wells were contemplated in areas where investment was not authorized. PEMEX’s exploration activities for shale resources included the drilling of the Santa Anita 501 and 601 wells, which were drilled in conventional formations of the Burgos basin, each of which led to initial production of over 5MMcfd of wet gas. In addition, the Céfiro-1 and Tangram-1 wells led to a better understanding of the production potential of unconventional formations located in the northeastern portion of the country, especially in the Eagle Ford formation. PEMEX was not able to consolidate the shale project in Tampico-Misantla due to permits, and it is also experiencing some issues in Veracruz. The reason is that traditionally, production took place in the central region of this state and PEMEX E&P attempted to extend exploration regions to the north and south. However, PEMEX was not successful with its appraisal wells. Furthermore, PEMEX had to halt drilling in some wells in this area, which also impacted the oil company’s annual production rate. “PEMEX completed fewer wells in 2014 and we booked less reserves than we are used to, but I am confident that we will get back on track in 2015. However, we will still not be able to work under ideal conditions due to the budget cuts,” comments Escalera.