Workplace safety and environmental protection in the Mexican oil and gas industry are currently in a period of significant transition. The regulators responsible for both the implementation and enforcement of standards and international best practices in these areas are going to change; most importantly, these responsibilities are going to be moved from the hands of entities such as STPS, SEMARNAT, and PROFEPA to newly created public institutions such as ANSIPA and CENAGAS. The SSPA system and the enforcement of the requirements it proscribes will become an internal framework for PEMEX rather than an industry-wide standard; these requirements will now also be more directly contrasted with and judged against those brought in by private sector operators. PEMEX’s safety results are about to have competitive benchmark and are thus about to be analyzed with a different level of scrutiny.

Despite their generally helpful nature and the constructive outlook they represent for the Mexican oil and gas industry, PEMEX’s safety results for 2013 will no doubt be influenced and direly contextualized by certain outstanding events that unfortunately did not reflect positively on PEMEX’s standards; although most of the numbers involved in the information presented by PEMEX do not take into account these events due to the fact that they are still under investigation, it is impossible to ignore the shadow that they cast over these results. These events include the PEMEX Tower explosion, which was determined to have been caused by the combination and accumulation of methane and other solvent vapors in pockets between the ceiling and the first floor due to poor ventilation and deficient building design, and the December 2013 accident at the La Venta gas processing facility in the state of Tabasco.

At a first glance, PEMEX’s safety results seem to be of a positive nature. The accident frequency index for 2013 shows an accumulated total of 0.57 accidents per million of working man-hours, which not only represents a 6.6% decrease when compared to 2012, but it also represents the first decrease in this index since the 2008-2009 decrease. The period between 2009 to 2012 was characterized by a slow yet steady climb in this index that led some to believe that PEMEX could easily reach levels above one accident per million of working man-hours before the end of the current decade. Thankfully, the current levels of this index reverse this trend for the time being. Most of this decrease can be attributed to a dramatic decrease of accidents in refineries, as is evidenced by the 39.5% decrease in this index when applied exclusively to this subsidiary. When it comes to the 2013 accident gravity index, things appear to be a little more static. Although the steady increase detected in this index from 2010 to 2012 is not as pronounced as that same increase in the accident frequency index, there was also no change in this index this year when compared to last year. That unchanged accumulated index is 32 days lost per million work man-hours. PEMEX Refining again sets an example by reducing its particular contribution to this accumulated index from 40 days lost per million work man-hours in 2012 to 22 days lost per million work man-hours in 2013, representing a 45% decrease that also happens to be the only decrease this year in this index out of all of PEMEX’s subsidiaries. The success of PEMEX Refining seems to indicate that their application and enforcement of PEMEX’s safety processes and guidelines could be used as a benchmark for the industry. Another important safety indicator is the 2013 accident frequency index for contractor personnel, which this year was situated around an accumulated total of 0.28 accidents per million working man-hours, which represents a decrease of 39.1% from 2012’s numbers. The fact that this decrease is significantly larger than the ones on other indexes seems to indicate that PEMEX’s application of its safety standards still needs to bridge a gap to compete with external contractors in this regard. Another important thing to note about this last index is that it is the only one where PEMEX Petrochemical presents a considerable percentage of decrease (the largest one of all subsidiaries at 81.7%) when compared to last year. In the case of PEMEX’s indexes, PEMEX Petrochemicals presents dramatic increases in its accident-related numbers: a 71.4% increase in its accident frequency index and a 63.3% increase in its accident gravity increase. When one additionally considers that it was an external contractor who accounted for a fatal accident in the Cangrejera Petrochemical complex, this difference becomes even more astounding. Perhaps the most important conclusion to draw from these results is that the aforementioned transition period has made this a year without significant changes in safety performance. 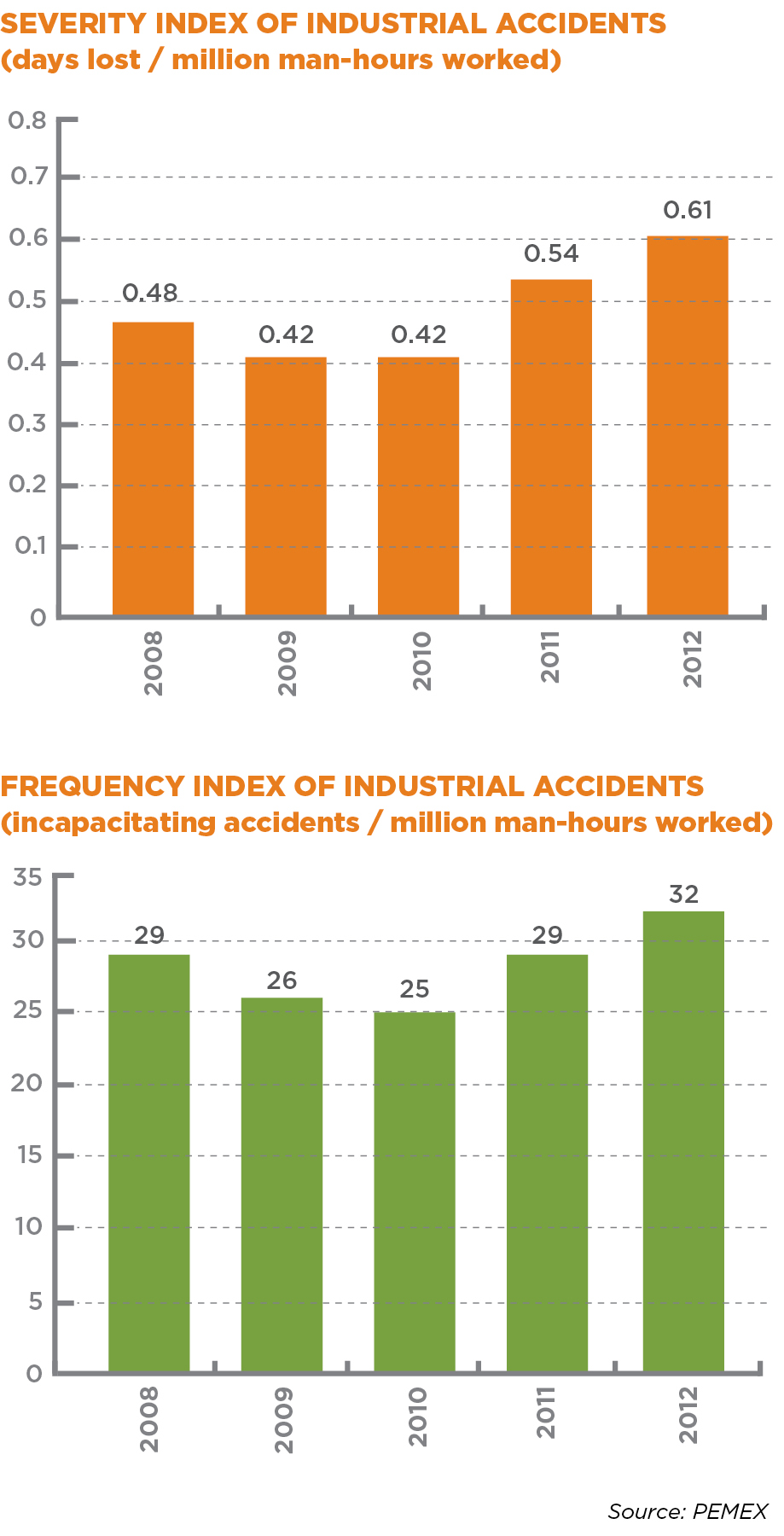