“The headlines in 2009 were that Pemex was running out of crude; that is not the case anymore,” says Carlos Murrieta, Chief Operating Officer at Pemex. Since the start of the production decline at Cantarell in 2004, diversification of production assets has been the key to bringing Pemex’s production decline down to 0.2% in 2012. This means that production remained stable for three years in a row, reaching 2,577 b/d in 2010, 2,553 b/d in 2011, and 2,548 b/d in 2012. It is expected that by the end of 2013, Pemex will be able to announce overall production growth for the first time in nine years. “The main news we would like to announce in December 2013 is that Pemex has reached its target of increasing oil production to 2.7 million b/d,” explains Carlos Morales Gil, Director General of Pemex Exploration and Production. “We expect 100,000 b/d of additional production coming from Cinco Presidentes, Poza Rica, and Chicontepec by next year, while the rest will come from Tsimin, where two wells are already producing 15,000 b/d, and Navegante, where we expect to produce somewhere between 30,000 and 40,000 b/d in 2013. At the same time, we believe that production at Ku-Maloob- Zaap and Cantarell will remain flat.”

“At some point, Cantarell was the second largest field in the world; now, we have other sources of oil. Imagine what it took for Pemex to shift its perspective. Sometimes, we disregarded assets when we should not have done so. We needed to stop looking for the next Cantarell and adjust to the times. Now we are focused on getting the maximum value from everything we can,” says Murrieta. Since the decline of Cantarell in December 2003, Pemex has made up for a substantial proportion of this decrease in overall output by incorporating new fields and raising production at existing fields in areas such as Cinco Presidentes, Chicontepec, and Litoral de Tabasco. “With the incorporation of the production from Litoral de Tabasco fields, such as Tsimin and Xux, the Terra and Bricol wells in the south, and the contribution of mature fields like Chicontepec, we have been able to keep production figures stable last year,” he explains. 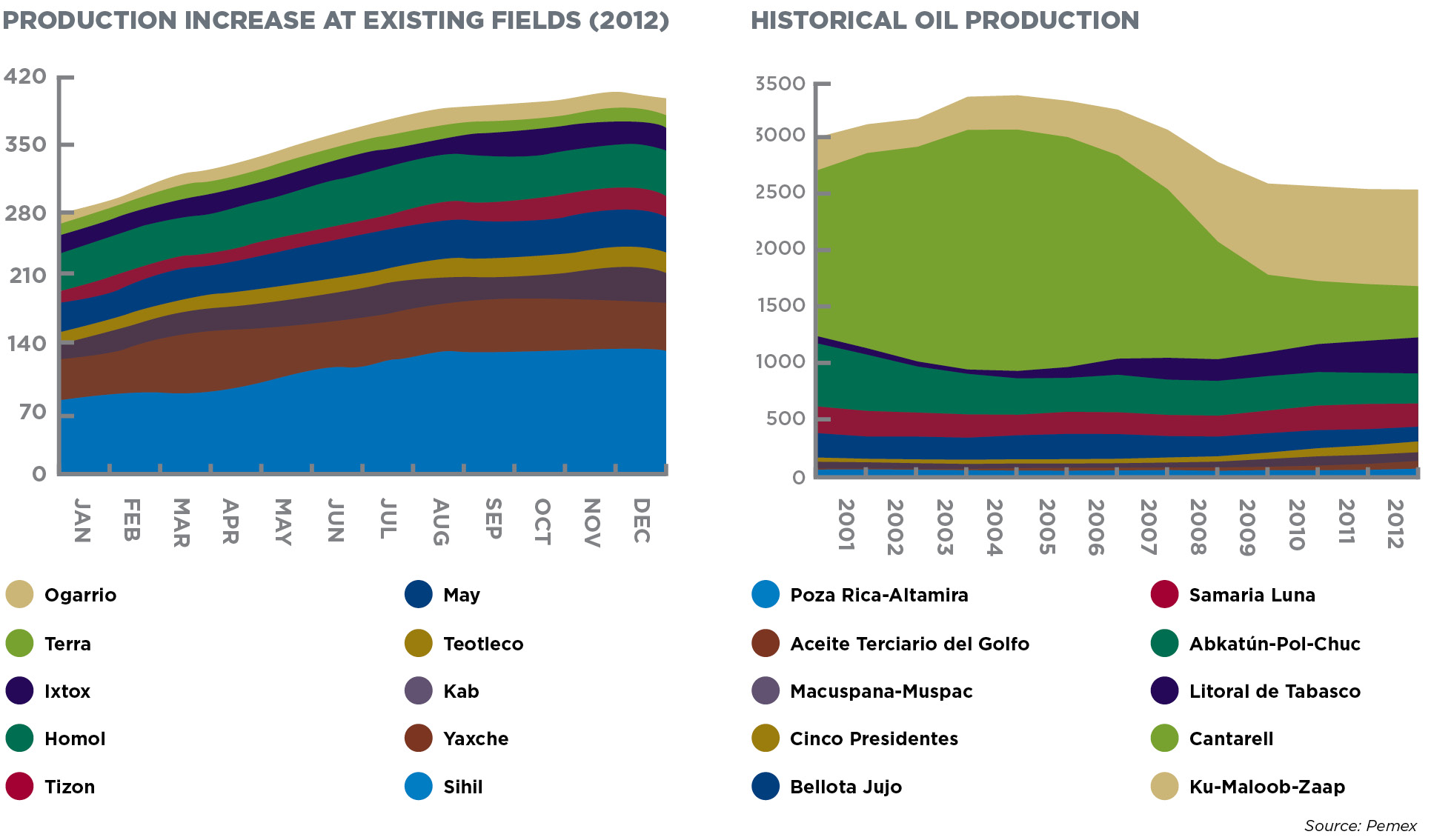 Morales Gil explains that the key to increasing oil production PRODUCTION DIVERSIFICATION RESERVES REPLACEMENT RATE lies in both the ability to reduce the time between the discovery of oil fields and initial production, as well the implementation of advanced technology for mature fields. “In mature fields we must implement horizontal wells, fracking, steam injection, and other means of secondary recovery; however, for deep wells like Navegante and Tsimin, the key success factors will have to do more with drilling efficiency,” he states.

In order to increase the number of producing fields as well as their output, Pemex has had to invest in both exploration and technology. The benefits yielded by these actions, however, were not immediate. Héctor Moreira, a Pemex Professional Board Member, cites the example of Chicontepec, which was largely viewed as a problematic asset because it consists of small pockets of oil spread out over thousands of square kilometers. “Chicontepec is an example of technological learning. Because there was no ad hoc technology that could work in this field, the Board requested a demonstration of the technology that would be required. The wells at Chicontepec are also laboratories, and this has greatly increased the production at the field. This is proof that, if you invest in technology, you will eventually generate more production, but this doesn’t happen overnight. This is an important message; if production at Chicontepec – the most complex of Pemex’s assets - can be optimized, then it is possible to do the same in any other field,” says Moreira.

Pemex is shying away from the idea of increasing its production just for the sake of it. Instead, the portfolio strategy at the company prioritizes reserve replacement over production growth. “The key is to have the necessary investment to always maintain our reserve replacement rate at 100%. This should be our first priority. The fact that today we have around 30 years of potential production fully identified gives a lot of certainty to everything we do,” states Murrieta.

The lessons learned from the experience at Cantarell have also allowed Pemex to develop a sensibility against over- exploitation of its biggest fields. It is now less likely that the NOC will break the reservoir balance in its assets. “It is very risky to over-exploit a field and break the balance between reserves and production. We only need to have enough production to meet Mexico’s hydrocarbon needs, and keep the production level within a reasonable margin. Exploration is the basis; as a consequence of investing in development, production naturally becomes quite large. We need to understand that first, then think of Pemex’s portfolio. Pemex cannot concentrate just on one area; it is not enough,” explains Murrieta. By incorporating production into a wider strategy that integrates exploration, sound technical and financial planning and technological development, the NOC has ceased to depend on the bounties of giant fields.