The Quest for Profitability, Operational Efficiency

As production ramps up in the coming years with new discoveries both offshore and onshore, a key question looming over the industry is how to most efficiently address production, transportation, storage and distribution of oil and gas products. Operators finding new oil are grappling with the issue of outdated infrastructure and whether to install their own or update the existing infrastructure mostly owned by PEMEX. One factor is certain: Investment is needed, and lots of it, says Hermann Saenger, Managing Director of SGS Mexico. “This is especially true in the ports, in the discharge facilities during transportation, in the distribution centers and all the way down to the gas stations. There is a huge need to invest in infrastructure.”

While it is easy to point out the deficiencies in PEMEX’s infrastructure, in fact, the company has built and operates an impressively diversified infrastructure portfolio. It has over 8,000 operating wells, 250 platforms, six refineries in the country, nine gas processing and two petrochemical complexes, more than 17,000km of pipelines, 74 storage and distribution terminals, 16 marine terminals, 10 liquefied gas terminals and over 2,000 transportation and distribution assets that include tank trucks, ships and tank cars. Budget and priorities at the former state monopoly pushed aside maintenance in favor of production, resulting in the current state of affairs. 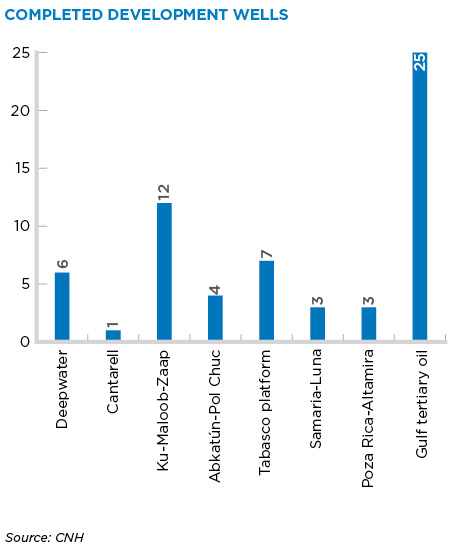 But Sebastian Aguayo, Vice President of Marsh Energy, says this is not limited to Mexico, and PEMEX in particular; it is a global trend. “One trend that the industry is facing all over the world is coupling existing and aged infrastructure with newer infrastructure. This may be perceived as complex but in reality, should not be a problem, and operators working with proper procedures that include a long-term vision for the project can manage the risk very well. For this to happen a proper communication transfer strategy between the old owner of the infrastructure, in this case PEMEX, and the new owner, will be crucial.” Aguayo argues that old infrastructure opens an advantage for those entering the market because they will need to invest less in the short term. “Most of the projects that are being auctioned in the upstream and midstream sectors have the advantage of needing only last-mile investments, as most of the infrastructure has already been developed.” James Buis, District Manager for Mexico at Nalco Champion, agrees that the existing infrastructure has a vital role to play as exploration and production activities ramp up. “Mexico has to increase production using its existing facilities and equipment,” he says.

One hurdle for companies looking to deploy new infrastructure is the difficulty in implementing cuttingedge technologies that require higher investments in the short term but that bring benefits over the longer period, says Andrés García, Business Development Manager of Ampelmann Operation. “The most challenging aspect of bringing technology to Mexico is the lack of knowledge not only of the product, but of its benefits. In Mexico, and in Latin America in general, people tend to focus solely on CAPEX.” Fortunately, he believes that as international companies start entering the country and implementing their best practices and forward-looking vision, “we will reach the point when the cultural factor of calling something expensive will no longer be relevant.”

Michael Günther, Director of Energy and Infrastructure Mexico at Marsh, points out that “major companies are entering the country to sell gasoline and natural gas, and they want to provide their own molecules, meaning that a major refurbishment of the transmission and distribution systems in Mexico will be required.” Investment is already arriving to the country in a tangible way, with an increasing number of exploration and production facilities, more natural gas and liquid pipelines and even new ports and storage facilities that are ready to start construction or are already being constructed. The country’s key ports of Tuxpan, Altamira, Coatzacoalcos, Dos Bocas, Matamoros and Tampico are all preparing to meet the industry’s new developments. “The project to build a port in Matamoros materialized after looking at all the investment that the licensing rounds are expected to bring to Tamaulipas’ offshore industry, especially in deepwater,” says Ricardo Correa, Director General of API Tamaulipas, Puerto de Matamoros. Similarly, Tuxpan is implementing measures and strategies to enable the transformation of its storage terminals and to integrate specialized facilities that have the capacity and efficiency to cater to the national demand for hydrocarbons, says Jorge Ruiz, Director General of API Tuxpan. It is planning five projects that will be deployed in the port during 2020. “These five projects are directed to the oil and gas industry. Representing an investment of MX$16.3 billion. They are meant to increase the port’s installed storage capacity to more than 7.8 billion barrels of fuel. MX$1.75 billion of this investment will be allotted to the port precinct and MX$14.6 billion to the storage areas near the precinct.”

Foreign companies, such as Kerui EPC, are also going after the opportunities the Energy Reform has opened to build the required proverbial bridges between operators at one end and end-users at the other. “Mexico is still a new market for us but it is quite an interesting one. We are looking for infrastructure opportunities in oil and gas for LNG, CNG and LPG projects,” says Wu Qiang, President of Kerui EPC, adding that, “since we work under opportunity-enhancing contracts, we plan on maximizing our number of local employees, local scalable economies and communities.”

As Qiang suggests, developing the local supply chain, and the necessary skilled labor, is another major focus for all players. The development of the chain will include best practices from abroad as international companies set up shop in the country, particularly as that applies to regulatory requirements involving minimum national content in operations coming from the licensing rounds. “Mexico still has room to learn from the experience of other countries where specific regulatory issues have already been solved,” says Alberto Sambartolome, Partner at ERM.

While the implementation of new standards is a hot topic, the preparation of local content to meet the challenge is a theme for which companies have raised a red flag. Rodrigo Favela, Partner at HCX, says: “There is a shortage of specialized workforce for high-tech operations. The industry’s expansion has also prompted many experienced people to move from PEMEX to private entities, causing a shortfall of experienced staff in the sector.”