These findings have to be nuanced: Pemex has for example a very high overall success rate in the shallow water in the southern marine area, according to Carlos Morales Gil, Director General of Pemex Exploration and Production. He points out that one place where unscheduled wells are drilled is at the onshore Burgos basin in the northeast of the country. Changes in the drilling plan are common in this region because of dicult access to the drilling locations due to the region’s challenging geology. Also, the Burgos basin covers much of the north of Tamaulipas and some parts of Nuevo León and Coahuila, regions which have been violence-ridden in the last few months and years and where security concerns have impacted the drilling plan. “The bottom line is: operating is very dierent from regulating,” Morales Gil says.

Gustavo Hernández García, Subdirector of Planning for Pemex Exploration and Production, downplays the importance of success rates of unscheduled wells and what they say about Pemex: “Every year, we drill more or less the number of wells that we planned to, but there will always be dierences between the number of planned wells and the final number of wells drilled in a year. This is part of any sensible company’s development plan.” Hernández García believes that Pemex’s 2011 drilling activities were relatively successful when compared to the development plan for the year. He says that some exploratory wells were switched from the original plan, particularly oshore, where the NOC did not succeed in contracting the required number of jack-ups to fulfill its drilling schedule. 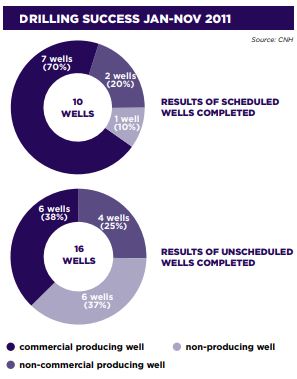