Second Round of ISCs 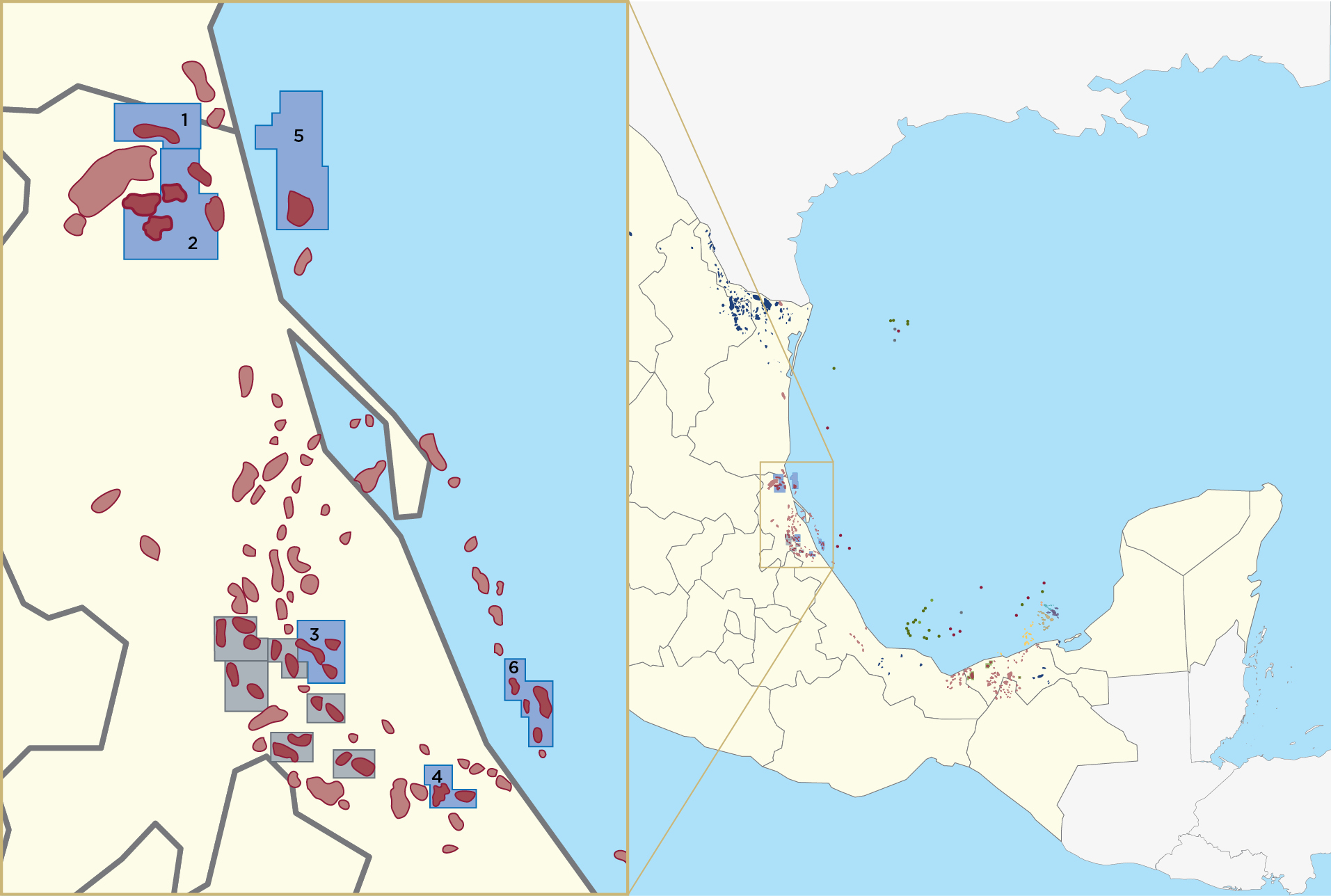 Six mature fields in Poza Rica-Altamira were included in the second round of ISCs. The blocks tendered during this round in mid-2013 were Altamira, Arenque, Atún, Pánuco, San Andrés, and Tierra Blanca, with Atún being the only one not to be awarded. The conditions under which PEMEX offered these contracts included a fee that the winners would receive for each barrel of incremental production, as well as the restitution of 100% of exploration costs and 75% of development costs.

The Altamira block is located on the coastal plains of the Gulf of Mexico, and is geologically located in the north part of the Tampico-Misantla Basin. This area produces heavy and extraheavy oil, with viscosity ranging from 10°API to 13°API. The first well ever drilled in this block was Altamira-30 in 1926, which produced oil from a Late Cretaceous formation. The block had its maximum production during that year, with 10,170b/d. By 2011, 87 wells had been drilled in this block, while 34 additional wells had been blocked. In the period between 2006 and 2011, 32 wells were drilled and a plan to drill in 71 additional locations was presented. PEMEX awarded Altamira to Egyptian company Cheiron Holdings during the second round of ISCs. At the same time, it handed over to Cheiron more than 700km of variable 2D seismic data, leaving the Egyptians to work on the data’s reprocessing. Cheiron Holdings, which tabled a bid with a winning fee of US$5.01 per barrel produced, continues to acquire 3D seismic data covering the area, uncorking the bottlenecks present in the field’s current production facilities, and commencing drilling campaigns and workover operations at the field’s current wells. Altamira produced an average 1,440b/d of oil during 2013 and still holds 4.18 million barrels of crude in proven reserves. This production figure is 19% below the baseline of 1,777b/d. However, production in Altamira was affected due to tropical storm Ingrid, as some wells had to be shut down due to floods, two of which were not yet in a state to be reopened by the end of 2013. Production reached 1,776b/d during the first three months of 2014. Although the baseline natural gas production for 2013 was 0.14mcf/d, the field is not producing natural gas due to lack of infrastructure.

The Pánuco block is located approximately 20km west from Tampico, Tamaulipas, on the coastal plain of the Gulf of Mexico. Bounded to the north by the Altamira block and to the west by the Ébano block, it covers a 1,839km2 area. It comprises the Salinas, Pánuco, Topila, and Cacalilao fields, where more than 1,626 wells had been drilled by the time it was tendered. Pánuco is one of Mexico’s oldest fields, with its first well completed as far back as 1907. The block was awarded to Petro-SPM, the joint venture between Petrofac and Schlumberger on June 19, 2012, at a fee of US$7 per barrel. At the moment it was surrendered by PEMEX to PetroSPM, the block had 191 operating wells, 99 closed wells and 1,336 blocked wells. The fields in Pánuco produce heavy oil with a density ranging from 10 to 13°API. Pressure within the block varies from 40 to 45kg/cm2. “Pánuco presents numerous challenges, some typical of heavy oil production and others related to the understanding of the fractured carbonate reservoir.” says Arindam Bhattacharya, President of Mexico and Central America of Schlumberger. “We are presently in the evaluation phase, where we are assessing various technical solutions that have the potential to improve production and recoverable reserves from the field in a costeffective manner.” Pánuco produced 2,051b/d during 2013 and the field’s output increased to 2,870b/d during the first trimester of 2014. Already in 2013, Schlumberger managed to bring production in the field to 22% over the baseline of 1,683b/d given by PEMEX. Total proven reserves for the field were estimated at 9.78 million barrels of crude.

Monclova Pirineos Gas (MPG) and Alfasid del Norte won the contract for Tierra Blanca during the second round of ISCs. The block is comprised of the Tierra Blanca-ChapopoteNúñez, Cerro Viejo, Vara Alta, Potrero del Llano-Horcones, Temapache, Alazán, and Álamo-San Isidro fields. The crude produced in these fields is heavy, with a density varying from 15 to 27°API and the current pressure varies from 66 to 76kg/cm2. Tierra Blanca produced an average of 1,215b/d during 2013, but is struggling to increase production during 2014. Luis Velázquez, Director General of MPG, explains that Tierra Blanca presents some geological challenges that are proving tricky to overcome. “Tierra Blanca is a difficult field to understand, more difficult than San Andrés. We are planning to drill a couple of wells there so we can see the potential of the geological structures that are left there. We still need to evaluate the risk involved more carefully in order to take a decision,” he comments. Besides the geological challenges, Monclova Pirineos Gas has had to overcome meteorological conditions that have hampered production levels. There was also an increase in the percentage of water in the wells at the block, which led to production falling short of the baseline target by 11%. Since there is no gas infrastructure in place, not a cubic feet of this hydrocarbon has been extracted. The block currently has 1.4 billion barrels of crude and 1bcf of natural gas in proven reserves.

MPG and Alfasid del Norte were also awarded San Andrés, which is comprised of the San Andrés, Santa Lucía, Remolino, and Hallazgo fields. The asset has evolved from the development phase to begin increasing production, and Velázquez is pleased to attest that his firm’s operations have been quite successful in San Andrés. “In both Tierra Blanca and San Andrés, but especially in the latter, we have identified the potential for several technologies that are not currently being used, including the use of gas injection to increase oil production,” he explains. “We also believe that we can drill horizontally in some of the Jurassic and Cretaceous reservoirs to optimize and increase production in these fields.” Out of the six blocks awarded in the second round, San Andrés reported the most important production increase, going from 1,673b/d of oil and 2.8mcf/d of gas in January 2013 to 2,508b/d and 6.93mcf/d in January 2014. For the entirety of 2013, San Andrés averaged production of 2,200b/d, which increased by more than 22% during the first trimester of 2014. MPG has managed to extract 20% more oil than the baseline target demanded but there is still no gas production in the area. Remaining proven reserves in the field amount to 4.06 million barrels of oil and 9.35bcf of natural gas.

The offshore field Arenque was not awarded to any company during the initial bidding round, but after a second stage of biddings, it was finally handed over to Petrofac at a base tariff of US$7.90 per barrel. Petrofac has committed around US$50 million in CAPEX for the project, mainly to reactivate production at its 51 wells, of which only 17 are currently in operation. Recent development projects for Arenque aim to reach a cumulative production of 112 million barrels of oil and 222tcf between 2011 and 2025. Arenque was the largest area in the second round in terms of reserves, with 1P reserves currently standing at 78.19 million boe, consisting of 46.51 million barrels of oil and 138.89bcf of natural gas. It is also believed that Arenque is the largest block of the six in terms of prospective resources, with an estimated 994 million boe. Arenque experienced a production increase from 4,332b/d in January 2013 to 5,164b/d in January 2014. A similar increase was seen in gas production during the same period, from 21.88mcf/d to 22.54mcf/d. Average production during 2013 reached 5,208b/d of oil and 23.39mcf/d of gas, barely missing the targeted baseline of 5,223b/d but exceeding the gas target by a mere 11cf/d. The figures of the first trimester of 2014 have seen a downturn in the field’s production, with 4,968b/d and 22.75mcf/d. However, according to a technical study, the production baseline was adjusted due to a delay in the programmed operations before the date when the contract was to take effect.