Mexico is just starting to dip its feet into deepwaters. Although shale has great potential, foreign expertise is required to develop the segment. With a long history of production, the county’s strength lies in its shallow-water prowess.

Until now, PEMEX has been the sole operator on Mexico’s shores but the Energy Reform is bringing stark changes. The results from the latest bid rounds, and from those still to come, illustrate the shifting landscape, where even Mexican companies are turning their sights to what was once PEMEX’s sole, and lucrative, domain.

Shallow water accounted for 79 percent of the country’s total crude oil production in 2016, according to CNH data, and remains the bread and butter of Mexico’s oil and gas industry. Overall production, however, has been in decline for over a decade. In 2016, total production averaged 2.155 million b/d; a drop of 5 percent on year. Production of crude oil has seen a steady decrease since peaking at 3.383 million b/d in 2004.

In 2016, PEMEX completed three commercially productive shallow-water exploratory wells: Pokche 1, Uchbal 1 and Teca 1 wells. The Pokche 1 well, off the coast of Tabasco, reached total depths of 6,518m and produced superlight oil and gas. Uchbal 1 was 2,670m deep and produced heavy crude and gas. Light crude was discovered in the Teca 1 well, located 30km offshore between Veracruz and Tabasco, and with a water depth of 44m. Its 3P reserves are estimated to lie between 50 and 60 million[MM1] boe. It reaches depths between 2,750m and 3,400m and could produce around 7,000b/d.

In the first quarter of 2017, PEMEX made two shallow-water discoveries with the completion of the Teekit 1001 and Koban 1 wells. Both were drilled in PEMEX’s Litoral de Tabasco asset in a water depth of 30m and 12m respectively. Teekit 1001 contains oil and gas and has an initial production of 2,472b/d, while Koban 1 contains gas and condensates and initially produced 3,276b/d.

Previously, Mexico’s most productive oil field, Cantarell’s production has been in decline for 13 years, and in 2016 was just 216,000b/d; down almost 90 percent from its peak of 2.136 million b/d in 2004. The drop is due to declining production at the Cantarell’s Akal field, which in 2004 was the source of over 95 percent of the field’s output, a figure which by 2016 had plunged to just 32 percent, contributing 70,000b/d to Cantarell’s overall output. 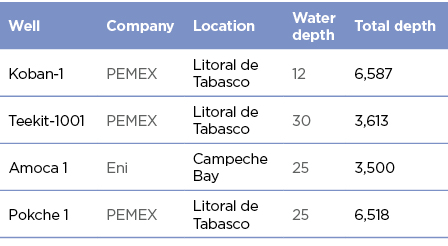 Cantarell’s other main field, Ek Balam, is the first of PEMEX’s assignments to be migrated to a “Hydrocarbons Exploration and Production Contracts” without a partner. Law provides that PEMEX and its partners can ask to migrate the entirety of the assignments it was awarded in Round Zero toward this new contractual model without the need of going through a tender as long as the migration represented advantages in terms of production, reserves and investment. “If we want PEMEX to be producing hydrocarbons in the future, it will need exploration areas both as assignments and farm-outs,” says Alma América Porres, CNH Commissioner, highlighting the importance this type of partner-less contract migration will play in the PEMEX’s future production ambitions. Ek Balam’s production peaked in 2013 at 60,000b/d, dropping to 43,000b/d in 2016. Containing approximately 500 million barrels of 2P crude oil reserves, the new contract was signed in May 2017. Lasting 22 years, the contract allows PEMEX to search for a partner on the field itself and the goal is to triple production from 30,000b/d to 90,000b/d between 2020 and 2023.

In 2009, Ku-Maloob-Zaap overtook Cantarell as Mexico’s most productive oil field. Its 2016 production output was 867,000b/d. This figure has been relatively steady since 2010, varying by only 25,000b/d since that year. Although production has remained stable, the source of the majority of its production shifted dramatically when Ku and Maloob reversed roles in 2012, with Maloob becoming the main producer and Ku falling from the most productive to the least. 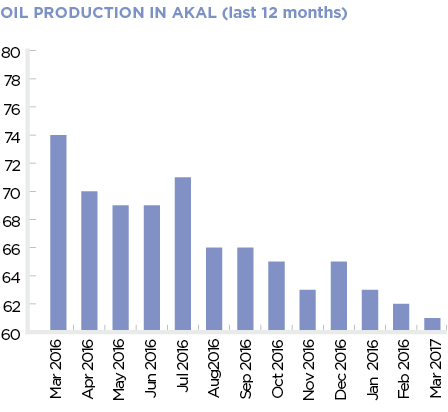 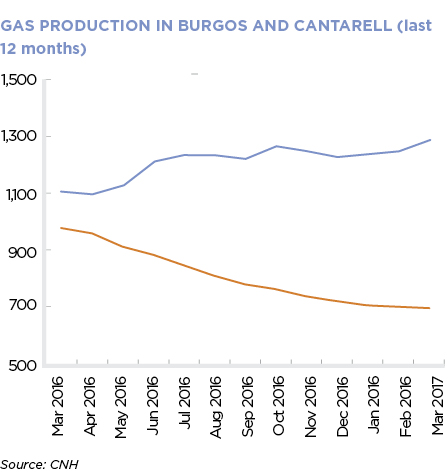 The year 2016 marked the first time an international oil Major drilled successful shallow-water exploratory wells in the country. Eni discovered approximately 110m of net oil pay in its Amoca-2 well in March 2017, becoming the first IOC to strike oil in Mexico since the Energy Reform. Sixty-five meters of the Italian company’s discovery was unearthed in deeper, previously undrilled areas. “We are seeing the natural results of processes set in motion by the Energy Reform, not long after it got under way,” said CNH in a press release addressing Eni’s success. Eni may be the first IOC to strike oil in Mexico but it will likely not be the last. CNH has granted six approvals for private companies to drill exploratory wells in the country’s shallow waters.

Eni won Round 1.2’s Amoka, Mizton and Tecoalli blocks at the end of 2015. Two other consortiums won in the round: Fieldwood and PetroBAL won the Ichalkil and Pokoch blocks while Pan American Energy took home the Hokchi block. Although two of the five contractual areas did not attract bids, Round 1.2 was considered a success by the industry, especially as it immediately followed Round 1.1 when only two out of 14 blocks were awarded to a consortium including Sierra Oil & Gas, Talos Energy and Premier Oil. “In our view Round 1.2 was the best round so far, from every angle. In fact, both Round 1.1 and 1.2 saw high-level bids from experienced companies,” says Carlos Morales, Director General of PetroBAL.

Through its partnership with US-based Fieldwood Energy, PetroBAL sets an example for how Mexican companies are marketing their local experience to capitalize on the Energy Reform and enter shallow water projects, which require more capital, technology and expertise than onshore. The same can be said for Sierra Oil & Gas, which won blocks 2 and 7 along with American company Talos Energy. “Although PetroBAL has many experienced individuals, we lack the operational experience required by CNH for participation in the bidding rounds,” says Morales. Fieldwood, on the other hand, is the largest operator on the US side of the Gulf of Mexico, offering a wealth of operator experience to complement PetroBAL’s Mexican knowledge.

As well as carefully selecting partners to ensure success in Round 2.1, Mexico’s shallow water operators recognized the world-class reserves up for grabs and bid accordingly. “Sierra bid on Block 7 because it saw several strong prospects with the right quality. These prospects have even been categorized by consulting companies such as Wood Mackenzie as among the top 10 global prospects to be drilled in 2017,” says Iván Sandrea, CEO of Sierra, which took away Blocks 2 and 7 in Round 1.1 in a consortium with Talos Energy and Premier Oil.

In July 2017, 15 more shallow-water blocks will be offered. Ten of the 15 fields, which are spread along the coast of Veracruz, Tabasco and Campeche, contain crude oil and gas reserves, while the remaining five contain gas reserves only. They range in area from 466km2 to 972km2, with an average size of 595km2. 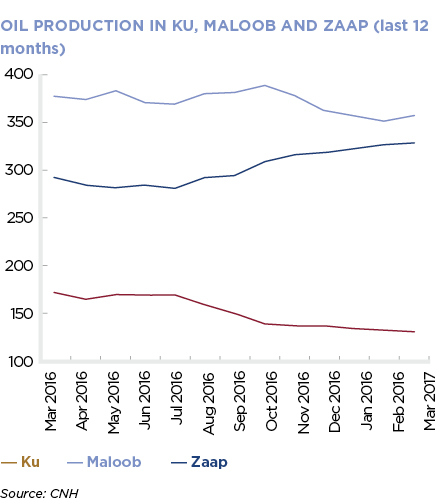 On Oct. 18, 2016, PEMEX sent an application to the Ministry of Energy for approval to farm out its Ayín and Batsil shallowwater oilfields, following its first farm-out of the deepwater Trion block in December, which was won by BHP Billiton. Originally planned to be auctioned on June 19 together with Round 2.1, in April 2017 CNH decided to delay the date to Oct. 4, 2017, due to fewer than expected bidders having prequalified.

With a total area of 1,096km2, the block includes the Ayín and Batsil fields, comes with 100 percent 3D seismic coverage and mainly contains heavy crude oil. It has a total of 10 exploratory wells and two development wells. Ayín offers 217.6 million barrels of 3P reserves, while Batsil has 79.6 million barrels.