Since Cantarell began producing oil in 1979 it has had a unique production policy of extracting as much oil as possible in order to increase the public finances of the country. Unlike Abkatún, Pol, and Ku-Maloob-Zaap, production at Cantarell was maximized because of the magnitude of the oil field – which represented 36.7% of the country’s total production in the 1980s, 40.8% in the 1990s, and 56.8% from 2000 to 2007. Even though many critics have branded this policy as detrimental to the long-term productivity of the field, Cantarell Administrator, Miguel Ángel Lozada Aguilar, would not call this policy a mistake because it was justified and made sense at the time of implementation. However, he believes it did have several eects on the long-term productivity of the field.

After realizing the policy of maximizing the value that could be potentially achieved from the field could not be sustained any longer, Pemex decided to change its strategy and acquire a sustainable production plateau to increase the ultimate recovery factor. As a means to achieving this goal, the NOC focused on increasing production by drilling new wells, changing from gas lift to electric submergible pumps (ESPs), and applying new technology and processes to its water and gas management infrastructure. However, Pemex had multiple di·culties in achieving this objective because during 2011 they were unable to acquire all of the required jack-up rigs, due to a lack of oers and because there was still a lot of pressure from the federal government to maintain production.

Currently, Cantarell has a 42% recovery factor – which is equal to 12 billion barrels. However, Lozada Aguilar believes they will be able to stabilize production at 472,000 b/d and increase the recovery factor to over 50%. This change of strategy, of prioritizing stable production at the complex, can be achieved through a variety of dierent means, but the essential ones will be the application of innovative technologies and enhanced oil recovery techniques.

The most important process currently being used that will allow Pemex to stabilize production is the injection of a double displacement surfactant in several areas inside the field. Cantarell currently has a gas cap at the top, an oil layer in the middle, and a large water deposit at the bottom. In order to increase its recovery factor, Pemex is injecting surfactant foam to wash and release as much oil from the rock as possible. Gustavo Hernández, Subdirector of Planning at Pemex Exploration and Production, explains: “After you inject the surfactant foam it slips very slowly into the pores, fractures the rock, and moves around the gas cap through oil molecules, which eventually slip down to the oil layer because of its molecular weight.” In addition to this double displacement technique, they are also working on increasing pressure at Cantarell through nitrogen injection. According to Javier Estrada Estrada, Commissioner of CNH, the pressure level at Akal – Cantarell’s main field – has not achieved a steady level because pressure is still declining while the gas-oil ratio is increasing.

Pemex is spending so much of its budget on these new enhanced oil recovery techniques in mature fields like Cantarell because – despite its declining production levels in the last 10 years – the NOC believes it can extract around 3 billion barrels more from the complex. “Even though Cantarell is reaching its production limit, due to the size of the oil reserve and the technological processes and enhanced oil recovery techniques available, it is worth Pemex’s time and money to invest in the field and explore and develop new areas,” Lozada Aguilar stresses. However, despite the fact that the production at the complex is no longer declining, and it is the NOC’s short-term goal to reach a production plateau here, the strategy of increasing investment in exploration and development projects all over Mexico, implemented in 2008, should not be neglected.

Despite the fact that the decline rate of Cantarell’s oil production has slowed down from 31.1% in 2008 to 10% in 2012, there are still various obstacles to overcome before stabilizing production. First and foremost, the federal government needs to pass a fiscal reform in order to rely less on Pemex for the federal budget – which at times has been up to around 40%. Secondly, in order to reach a production plateau and increase the recovery factor, the NOC has to invest, explore, and develop new regions around Mexico, but also in Cantarell, where they are focusing on extracting more oil from existing reservoirs and planning on drilling nonconventional wells with low rock permeability, such as the are doing at Sihil-Calcarenitas. “This might prove to be a complicated job because the global demand for drilling rigs is very competitive right now; therefore, if we do not acquire the necessary number of rigs to drill all the wells needed to stabilize production, we will not be able to increase the recovery factor at Cantarell,” Aguilar Lozada concludes. 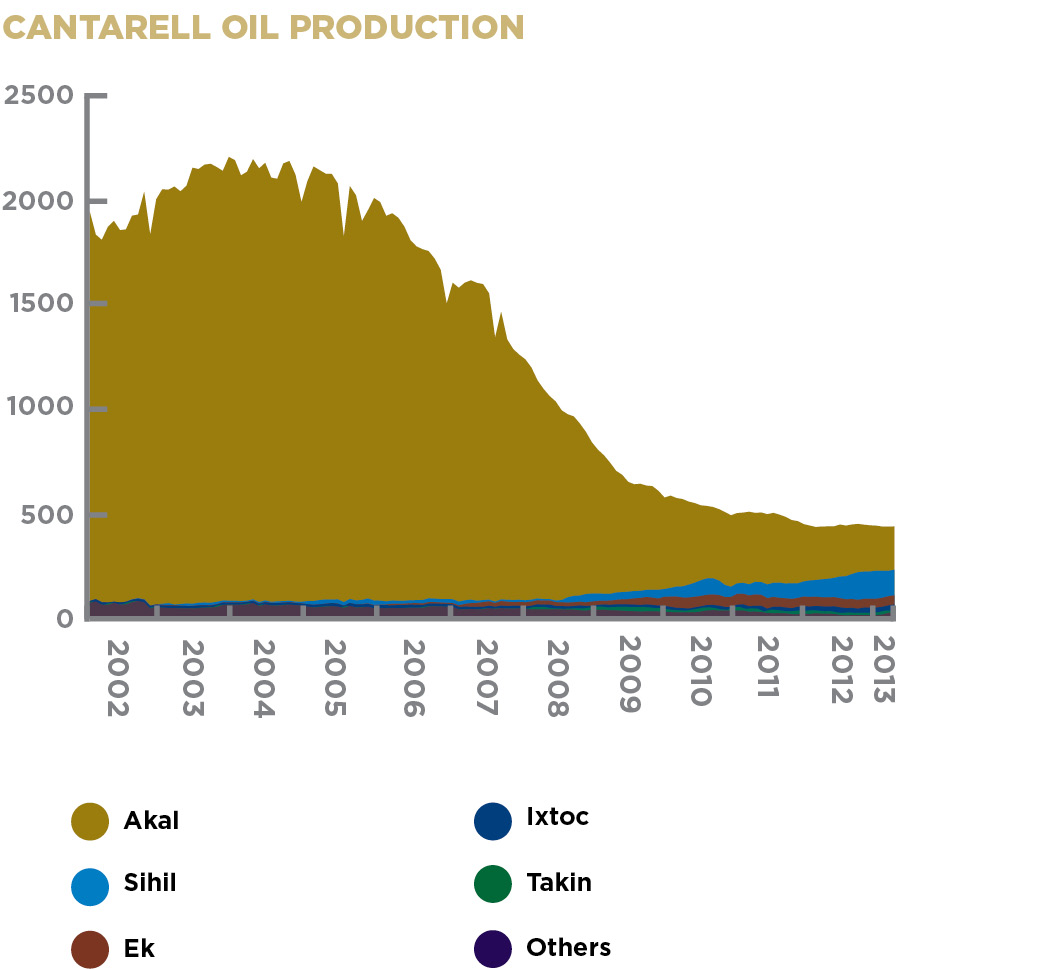 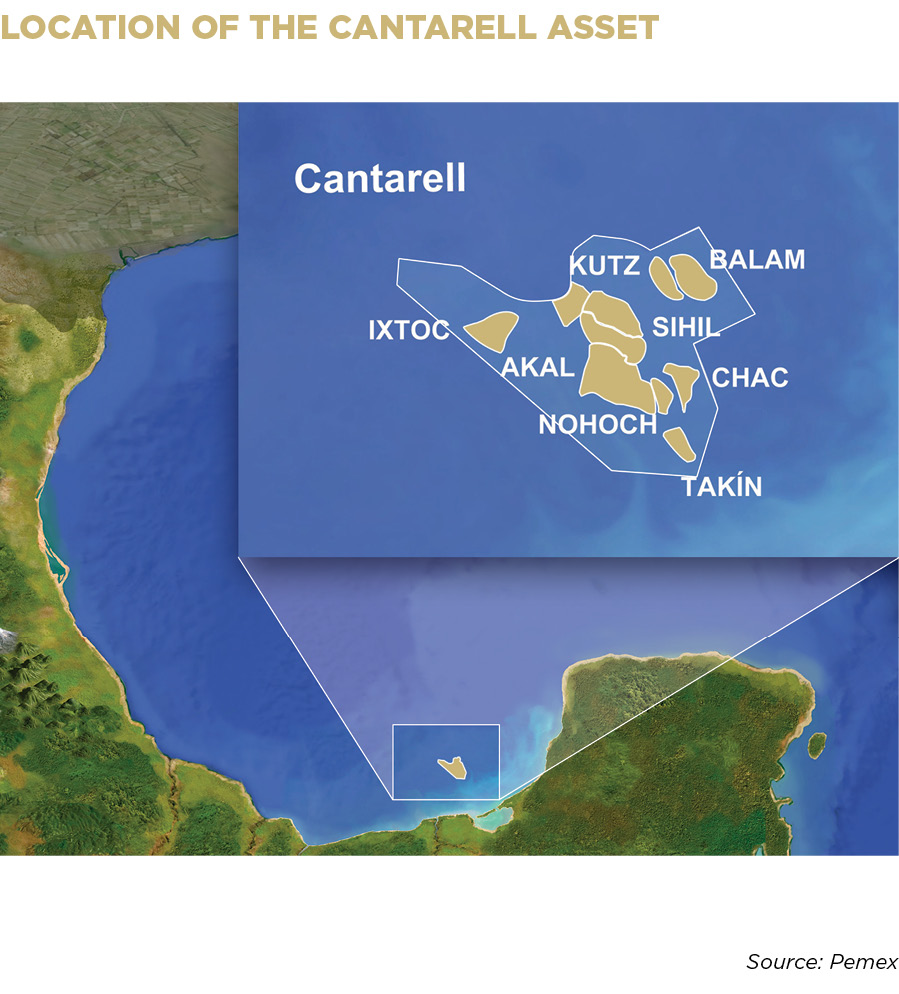 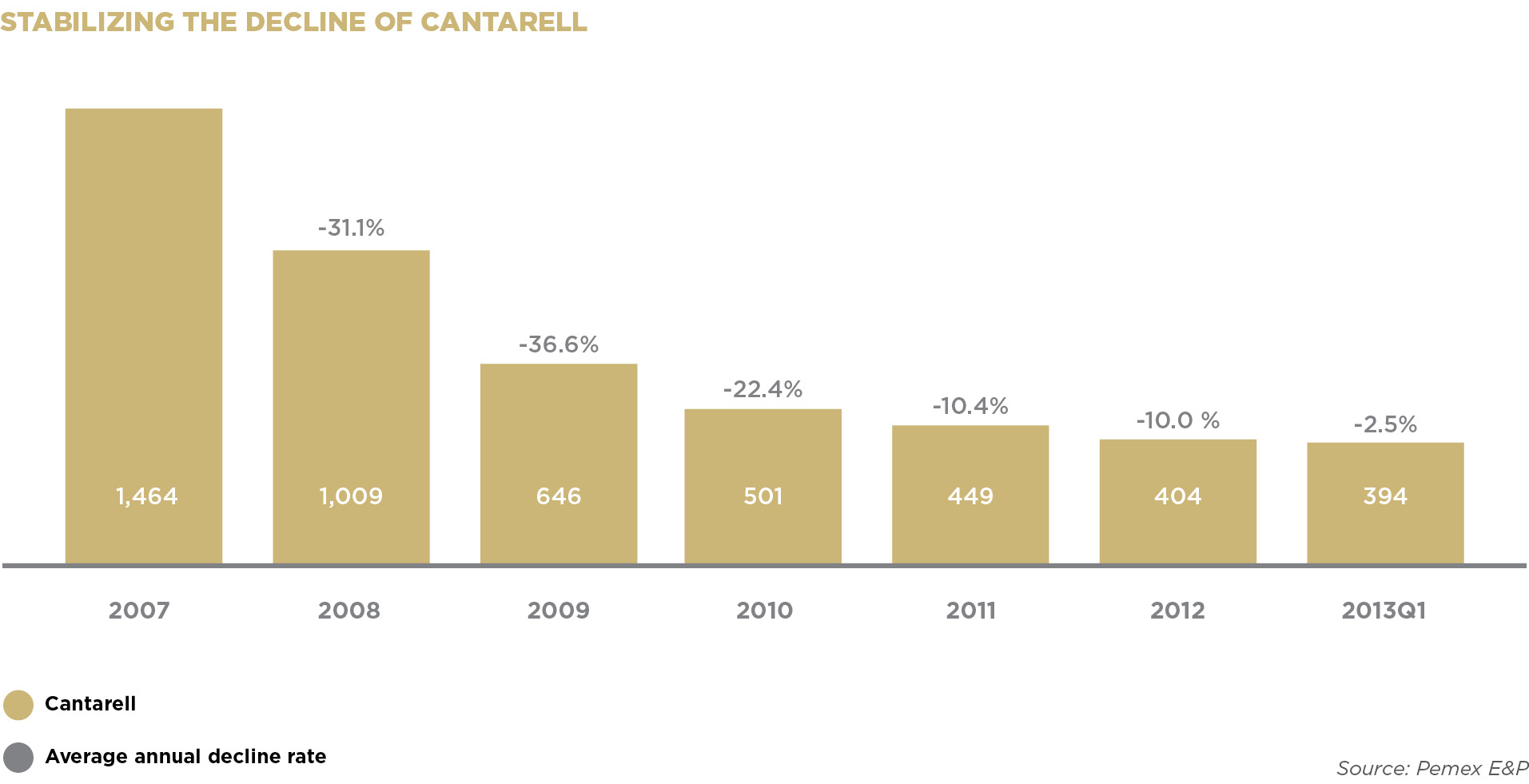