Q: What were the most important factors in the last six years that led to Pemex’s upstream success in 2012?

A: Without a doubt, the most important factor contributing towards this year’s success was that both the government and Pemex’s administration understood the lifecycle of the oil and gas process, and were patient enough to authorize an increasing amount of financial resources for the exploration and development of new reservoirs. The administration was also patient in terms of allowing Pemex to grow its capacity to execute projects through new contracting methods.

Q: What are the production targets for 2013, and what technologies will be required to achieve these targets?

A: Production-wise, we expect to reach 2.7 million b/d by the end of the year. In terms of the technologies needed, we will require horizontal wells, fracking, and steam injection or secondary recovery to reach our goals at mature fields. For Tsimin and Navegante, the key factors will have to do with improving drilling e·ciency.

One of the technological changes that we are implementing in Tsimin is in our approach to platform design. Traditionally, our platforms were designed to provide production infrastructure for up to 12 wells, but we have realized that we can drill additional wells by optimizing our rig design. Therefore, we are preparing platforms to drill with dual rigs, which can come in combinations of two fixed platform rigs, or one fixed platform rig and one jackup rig. This flexibility is production-driven.

Another change is the inclusion of separation systems for the management of very light fluids and oil, and the cutting-edge compression systems being installed in Tsimin’s production facilities. We are also using new well completion techniques – such as a new cementing technology – and the packers as well as the set of valves that we are utilizing in those wells are also cutting-edge. These are basically the changes we are introducing in these development areas, which are very technology-oriented.

A: The people in charge of the development division, led by Javier Hinojosa Puebla, are certainly technology-oriented and open to innovation. They have been doing a great job of introducing the use of valuable technologies on recent projects. Clear examples of this are the new designs for wells, FPSOs, and platforms we are starting to see in the Lakach area in deepwater and in Ayatsil, where heavy oil needs to be produced. The development division is also responsible for incorporating new technologies for the design of fixed platforms in Tsimin.

Q: How will the achievements of the development division impact Pemex’s performance in the short and mediumterm?

A: Their role is definitely crucial. The development division has its sights set on one single decisive objective: to reduce the amount of time between the discovery of an oil field and the first production returns. If we do not achieve that, then we have failed, and that failure will be evident in both the short and mid-term. We have already seen the fruits of the eort that is being put into this objective in Tsimin: the field started producing in August 2012, exactly one year after its discovery. However, Tsimin is somewhat of a conventional field; the real tests for the development division will be in Lakach, which holds very heavy oil, and Ayatsil, which is a very deep reservoir.

Q: How will success be measured at Lakach and Ayatsil? What is the timeframe for the start of production at these fields?

A: It depends on the progress that each project has already made. The first milestone in the process is to define the specifications of the equipment that will be needed. Lakach is already past that stage, while Ayatsil is at that stage at the moment. The main challenge at Ayatsil will be the complexity of the FPSO technology needed to process the very heavy crude oil. Once the design stage is completed, and provided that the project goes well in terms of placing orders and supervising the manufacturing of the equipment, the green light is granted to move to the next phase, which is the execution process. Lakach is already moving to that stage, and we expect to move forward from that stage in the next six months. Ayatsil is still in the design phase, but we expect to start the execution phase in the next few months. The process is based on milestones against which progress is constantly checked. Pemex communicates when each milestone is completed and if progress is on schedule or not. 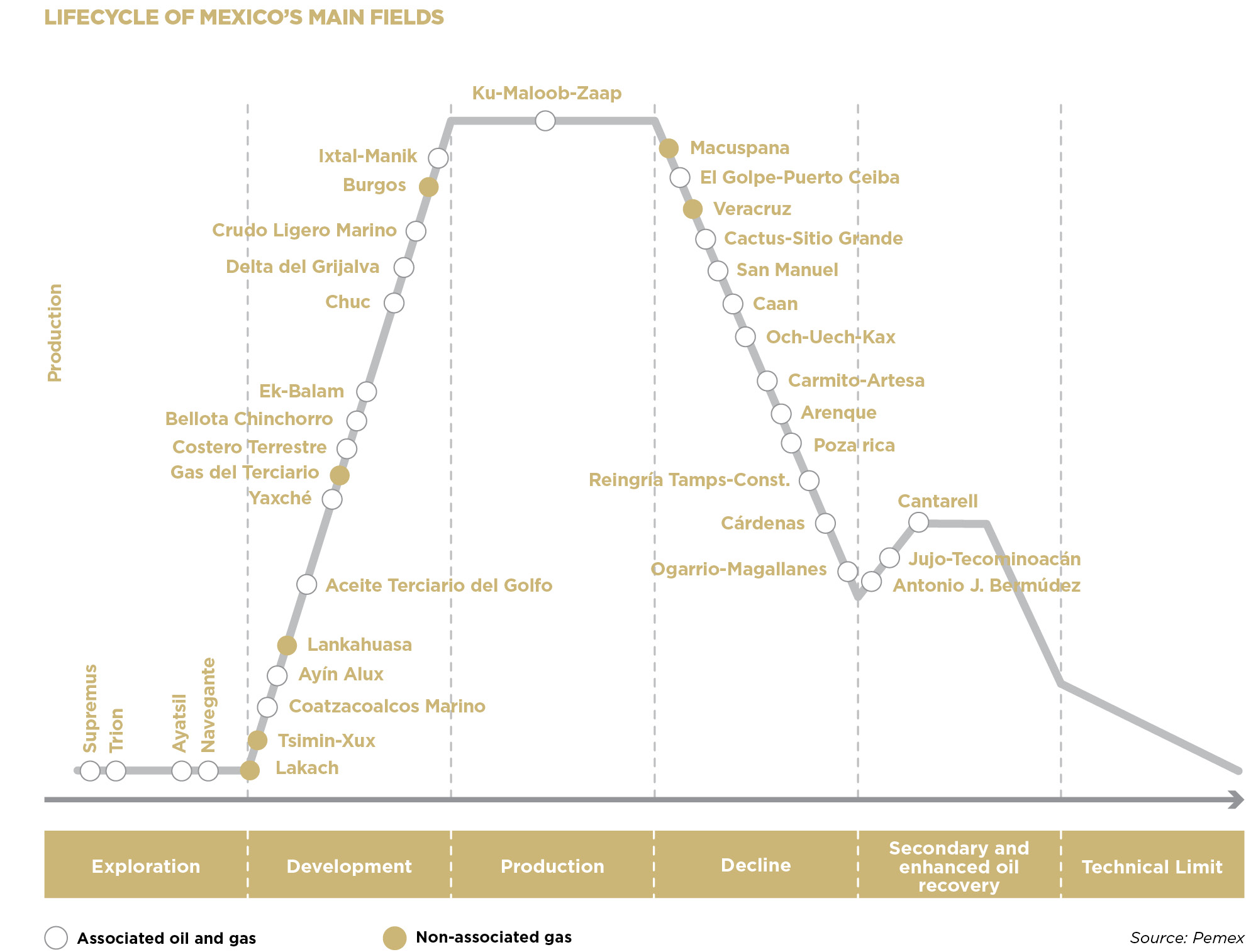 Q: Is there anything that can be done to streamline contracting processes and accelerate the development process?

A: This is a concern that emerged even before the implementation of the Pemex Law. We all agree that the Pemex Law was a positive step towards improving the contracting process. It has given Pemex a more robust foundation for contracting and a better basis for analysis. The problems emerge in the several approval stages that the contracting process involves: at the moment there are five approval stages through which every contract must pass, and the value added in each is marginal. We believe that two can be eliminated, streamlining the procedure without losing any value in the process.

The main thinking behind this idea is that the value added in the last two approval stages does not justify the costs of the time lost. Reducing this lost time is critical, since it represents money. One could argue that the additional two months that these stages take do not represent much time when talking about contracting, but looking at it from the production perspective it represents a lot of money.

Following the decline of Cantarell, Pemex launched a strategy to diversify Mexico’s crude oil production. Pemex’s eorts have not been in vain, as Mexico’s dependence on Cantarell has significantly decreased. In 2004, Cantarell was responsible for more than 63% of the country’s total production, a figure that today stands at only 17.8%, while Mexico’s overall production has stabilized at around 2.55 million b/d.