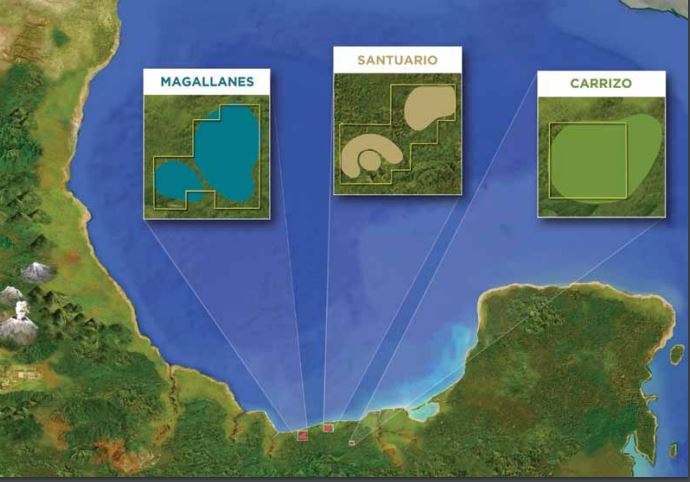 Operated by Pemex for around 50 years, the Magallanes area, like all of the areas awarded in the first contracting round, is located in Tabasco, and is the westernmost of the three areas. The area is located in the basin Salina del Istmo to the north of the Istmo de Tehuantepec, 50km from the city of Coatzacoalcos in Veracruz. Magallanes comprises two fields, Otates and Sánchez Magallanes, and is the largest of the three areas at 169.06km2. The area has the largest volume of oil in place, at 1.16 billion Boe. Current 3P reserves are 109 million Boe, and current production at Magallanes is 6,800 bbl/day. To this day, 86 sand deposits have been identified and 775 wells have been drilled at Magallanes, of which 324 have been closed and only 54 are currently producing. The two fields of Magallanes are located in a complex of upper tertiary, multiple, fair to good quality reservoir sands. The production challenges at Sánchez Magallanes, the largest of the two fields, are mainly well-related, including sanding up, plugging with paran and damage from significant water-flood. Pemex began exploitation of the Otates field in 1965 and now has only a small amount of remaining reserves, which may not be developed, depending on the results of new exploration seismic and reinterpretation of 3D seismic data from 2005.

Also located in Tabasco, and the central area oered in the first contracting round, is Santuario. The area is located in the basin of Salina del Istmo, like Magallanes, and lies to the west of the city of Comalcalco. It comprises three separate fields - Caracolillo, El Golpe and Santuario - and is the second largest contract with an area of 129.93km2. El Golpe was discovered in 1963, but production of gas began to decline between 1974 and 1984 because of the presence of water in the wells. Santuario was discovered in 1967, and production started to decline in 1978. The last field to be discovered was Caracolillo in 1969, which was closed in 1993. The Santuario area has 473 million Boe in place in total, and 3P reserves of 37 million Boe. Current production at Santuario area is 6,700 bbl/day. The Caracolillo field currently has no 3P reserves in place, with a total of 11 non-producing wells. The other two fields have 200 total wells, of which 32 are currently producing. Like Magallanes, Santuario’s fields are located in upper tertiary, multiple, good to fair quality sands. Pemex considered its drilling activity at the Santuario area to have been successful, but now the area needs new techniques to bring back production.

The Carrizo field is the easternmost of the three areas, and the smallest at 13.01km2 and comprising only one field. The area belongs to the basin of Comalcalco, which is composed of seven sand deposits with an approximate depth that ranges from 500m to 2,000m, is located 8km west of the city of Villahermosa. The producing deposits were discovered in 1962, drilled to a total depth of 1,780m. The well was completed in the range 1.464m to 1.477m, and obtained initial production of 213 bbl/day of 27° API. Another 43 wells were drilled between 1965 and 1977 to reach the deepest deposits that were over 1,000m in depth. Of these 43 wells, none are currently producing: 30 were closed and 13 were plugged o. Over the last 11 years of its producing life, the field has an average of 13 active wells producing a maximum of 1,200 bbl/day before water entry initiated a steep decline. Having reached cumulative production of 14.86 MMbbl of oil and 9.60 Bcf of gas, Carrizo was abandoned in December 1999. During 2000 and 2001 technological tests were performed in eight wells in order to reactivate the field, but these wells were subsequently closed due to lack of funds for development. Since 2000, installed equipment and systems have been out of operation without receiving maintenance. The remaining 3P reserves, certified on January 1, 2010, amount to 49.80 MMbbl of oil and 5.80 Bcf of gas. 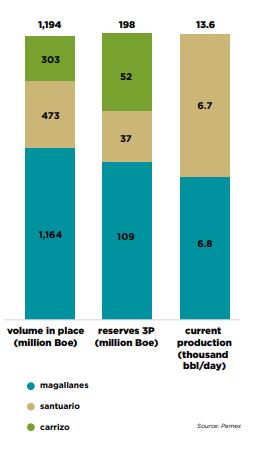