While 2014 was destined to be remembered as the year in which Mexico opened its oil and gas industry to private participation, the dramatic drop in oil prices has had an even greater impact on the industry. The last 18 months can be characterized as having been hectic for the global oil and gas industry. Oil prices plummeted drastically during the second half of 2014, ending the average price of around US$90- 100 per barrel that the industry had enjoyed for four years. Between June 2014 and January 2015, the WTI crude oil spot price dropped from a US$107 to US$45, after which it hit its most recent low in mid-March at US$43 before returning to US$60 by mid-May. The oil price is not expected to return to its previous average of US$90-100 over the coming years, with differing industry expert opinions indicating an expected price range of US$60-70 in the near future. The drop has forced companies to adjust their strategy and rethink the allocation of their resources. PEMEX did not avoid this constraint, which was soon made worse by swinging budget cuts. However, amidst this turmoil, the authorities pressed on with the Energy Reform, making stalwart efforts to set the conditions necessary to open the Mexican market to private participation. PEMEX has worked closely with CNH and CENAGAS to transfer data, infrastructure, and responsibilities. Round One was officially launched in December 2014, and CNH’s Data Room opened on time and to broad acclaim by mid-january. A large number of companies bought access to the data, and many entered the pre-qualification stage, proving once and for all the private sector’s interest in the Mexican oil and gas industry.

During 2014, crude oil production totaled 2.429 million b/d, a decrease of 93,000b/d or 3.7%, as compared to 2013. By May 2015, production was down another 7.9% and stood at 2.235 million b/d. This can be attributed to several factors. First, a natural decline in production at Cantarell and an increase in the fractional water flow of its wells resulted in a 7.3% decrease in production. Second, the country saw a 3.5% decrease in production of extra-light crude oil, primarily due to an increase in the fractional water flow of wells in the Pijije and Sen fields located in the Samaria Luna business unit of the Southern region, as well as a natural decline in production at the Crudo Ligero Marino project in the Southwestern Marine region. The accident at the Abkatun-A Permanente platform slowed down PEMEX’s production by 220,000b/d during the first weeks of April. Although PEMEX has stated that it will pursue its objective of producing 646,000b/d in the Abkatun region by June, the losses, which are estimated between US$670-780 million, continue to have an impact on the oil company’s production and finances. 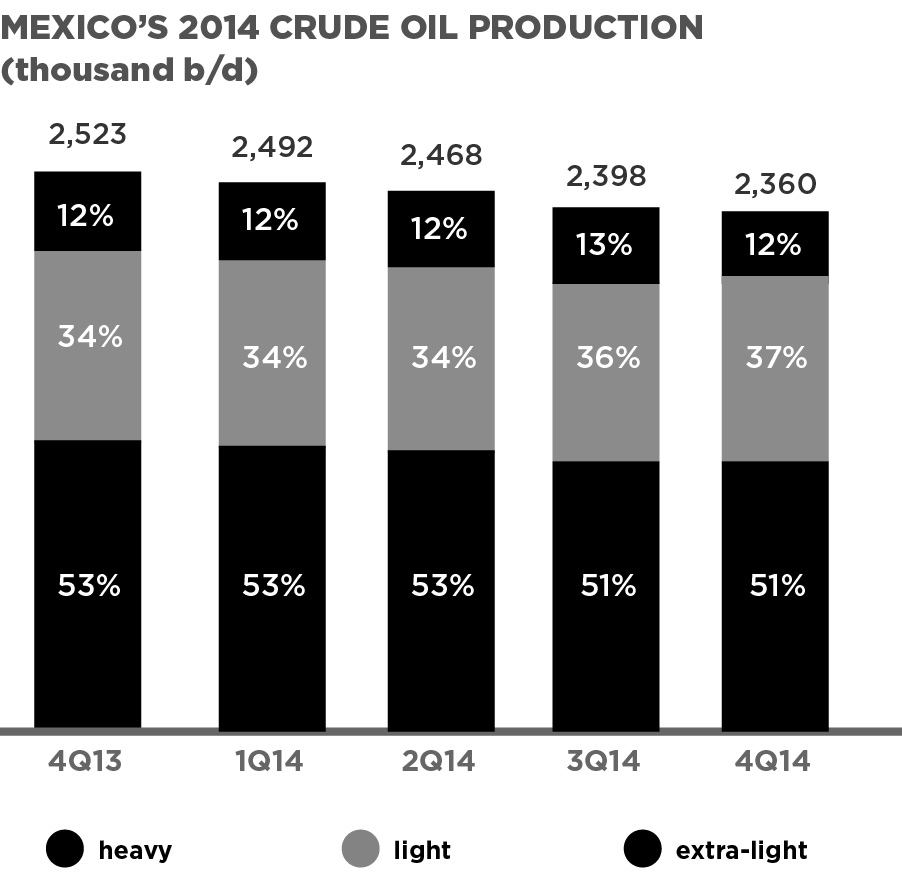 During 2014, natural gas production increased by 2.5%, totaling 6.532bcf/d, primarily due to a 4.6% increase in associated gas production, mainly at Ku-Maloob-Zaap, Cantarell, and Litoral de Tabasco. This increase was partially offset by a 2.9% decrease in non-associated gas production during the period, which was caused by a scheduled reduction in drilling activities and the termination of production wells at Burgos and Veracruz. Furthermore, during 2014, gas flaring increased by 172mcf/d, primarily due to scheduled maintenance and unscheduled shutdowns of compression equipment located on marine rigs and limitations in the capacity to handle and transport natural gas. Gas production amounted to 6,305mcf/d during the first half of May 2015. Cantarell, with a natural gas output of 1,253mcf/d, was the most prolific gas field in this period.

Natural gas production took a small 0.23% (14.4mcf) hit to reach an average production of 6.37bcf/d in 2013, with 691.4mcf/d of nitrogen, which was 109.3mcf/d above PEMEX’s 6.261bcf/d target for the year. Associated gas production increased at Ku-Maloob-Zaap, Abkatun-PolChuc, and Burgos, especially in the development of the Nejo field in the latter. However, this was partially offset by a decrease in non-associated gas production due to the natural decline of fields in Veracruz. Gas flaring amounted to 2.2% (128mcf/d) of the total natural gas produced, well below the maximum gas flaring limit of 214.8mcf/d set by CNH.

PEMEX saw a marked decline in its exploration activity during 2014 when compared to the previous year. In 2014, PEMEX drilled 14 exploration wells with a success rate of 33%, a considerable difference from the 38 exploration wells drilled in 2013 with a success factor of 61%. In conventional plays, PEMEX was only able to complete 18 out of the 30 wells it had originally planned. This fall can directly be attributed to certain budgets not being authorized and exploration activities being carried out in more complex reservoirs. Nonetheless, the oil company did finish the year with some success stories on the exploration side. Important discoveries were made in deepwater, such as Exploratus, and the Trion, Tsimin, Kunga, and Xun wells were delineated. Given that exploration activities are measured in three-year periods, 2014 should be seen as part of a cycle. Even if the results seem dwarfed by those of 2013, a 33% success rate falls within the international average. 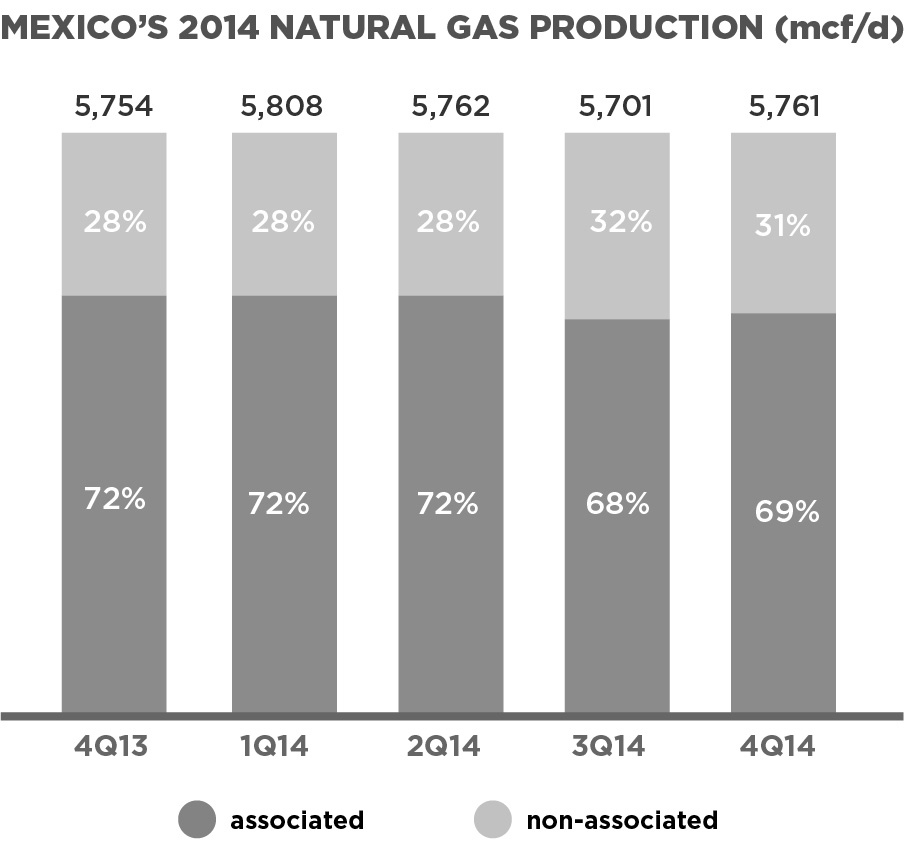 Crude oil processing totaled 1,155b/d in 2014, a 5.6% decrease when compared to 2013, primarily due to scheduled maintenance activities, unscheduled maintenance and renovations, as well as operational problems resulting from the quality of crude oil supplied by producing fields. During 2014, the ratio of heavy crude oil to total crude oil processed by the NRS was 43.2%, which came as the result of an effort to utilize highly specialized equipment to convert residuals and to maximize gasoline and diesel output. During 2014, PEMEX’s usage of its primary distillation capacity decreased by 4%, as compared to 2013, to 69.1% of its total capacity because of maintenance activities and renovations. In the first week of May 2015, approximately 1,109b/d were refined in Mexico..

Tags:
MOGR 2015
PEMEX
Production
Round One
Data Room
Natural Gas
Mexico
Exploration
CNH
Share it, if you like it!
Suggest Hashtag