2013 was an interesting year for the Mexican oil and gas industry as a whole, given how the wheels of change were set in motion. The shadow of the Energy Reform colored operations throughout the year, with companies waiting to act based on what would happen with the industry and PEMEX. The first Energy Reform proposals came out in August 2013, indicating a moderate opening up of the industry. However, with the Pact for Mexico falling apart, PRI sought out an alliance with PAN to seal a majority of votes in Congress. The negotiation process of this alliance led to the final reform being more far reaching than was originally planned. In terms of operational results, PEMEX had an average year. The company was able to hold its ground in production, but exploration results were not as inspiring as in previous years. According to PEMEX statistics, crude oil production dropped by 1.02% to reach 2.522 million b/d during 2013. The company continued its deepwater exploration activities, managing three new oil discoveries in the Perdido region. PEMEX reported a net loss after tax in 2013 of US$12.9 billion after having reported a net profit in 2012 for the first time in many years.

PEMEX is in the process of changing its current divisional structure into a more centralized organizational layout. To date, PEMEX continues to be organized into four subsidiaries, each with its own board, led by a corporate division that also has its own board. The PEMEX Board of Directors is now centralizing various functions for governability purposes, to pursue efficiency gains, enhance operational performance, and streamline execution strategy. In response to fiscal concerns from the Federal Government, PEMEX has settled on a model with two subdivisions: PEMEX E&P, in charge of all the upstream operations, and PEMEX Industrial Transformation, which will merge all downstream activities hereto performed by PEMEX Refining, PEMEX Gas and Basic Petrochemicals, and PEMEX Petrochemicals. “We want to adjust the organizational structure and start creating value in an open market,” explains PEMEX COO Carlos Rafael Murrieta Cummings.

Throughout the year, PEMEX discovered oil in the Cuencas del Sureste (Southeast Basins) and the Perdido Area, as well as shale resources in the northeastern part of the country. The largest findings were made in deepwater, with the Maximino-1, Exploratus-1, and Vespa-1 finds. The completion of the Lakach-21 development well – the first of its kind in Mexican deepwater – marked the continuing progress in the Lakach field. Additional discoveries were made in late Jurassic formations such as in Nuncio-1, Tangram-1, and Kernel-1 in Burgos; Sini-1 and Tamarhu-1 in Samaria- Luna, as well as Tson-201 in Ku-Maloob-Zaap. PEMEX has announced it will be focusing on the Jurassic reservoirs of its southeastern fields to discover additional reserves.

The strong focus on deepwater exploration led to a low 1P reserve replacement rate during 2013. “We must keep our portfolio balanced, but in the short-term, we need to emphasize the incorporation of 1P reserves,” says Murrieta Cummings. “This not only consists of reclassifying 2P and 3P reserves into 1P, but we also need to increasingly add reserves from new discoveries.” While PEMEX continues to have enough 3P reserves to maintain around 30 years of production at current levels, it has seen a 3.1% dip in 1P reserves for 2013 – from 6.16 billion boe in 2012 to 6.05 billion boe in 2013.

During 2013, 2D seismic acquisition increased by 4% compared to 2012. PEMEX acquired additional 2D seismic by focusing on potential shale resources through the Sur de Burgos 2D survey (525km2) and on the Southeast  Basins, through the Zapatero Pénjamo and Sal Somera surveys (609km2). On the other hand, 3D seismic data acquisition decreased mainly due to the transition from the acquisition stage to the interpretation stage.

PEMEX completed 38 exploration wells - 92.7% of the company’s target for the year - and the 785 completed development wells exceeded the yearly goal of 615 development wells. 25 of the 38 exploration wells were productive, rendering a 65.7% geological success rate and a 58% commercial success rate, which surpassed the range that PEMEX set as a target (25-55%). During 2013, PEMEX had 9,837 operating wells, of which 6% were located offshore. This number represented an increase of 397 operating wells compared to 2012. Completion of wells decreased by 415, due to a planned reduction of activities at the Chicontepec, Burgos, and Poza Rica- Altamira projects. However, 36 horizontal wells were drilled in Chicontepec during 2013, increasing the number of unconventional wells operating in the area to 44. These wells represent only 1.7% of the total operating wells in the area, but contribute 14% of its total production.

Natural gas production took a small 0.23% (14.4mcf) hit to reach an average production of 6.37bcf/d in 2013, with 691.4mcf/d of nitrogen, which was 109.3mcf/d above PEMEX’s 6.261bcf/d target for the year. Associated gas production increased at Ku-Maloob-Zaap, Abkatún-Pol- Chuc, and Burgos, especially in the development of the Nejo field in the latter. However, this was partially offset by a decrease in non-associated gas production due to the natural decline of fields in Veracruz. Gas flaring amounted to 2.2% (128mcf/d) of the total natural gas produced, well below the maximum gas flaring limit of 214.8mcf/d set by CNH. 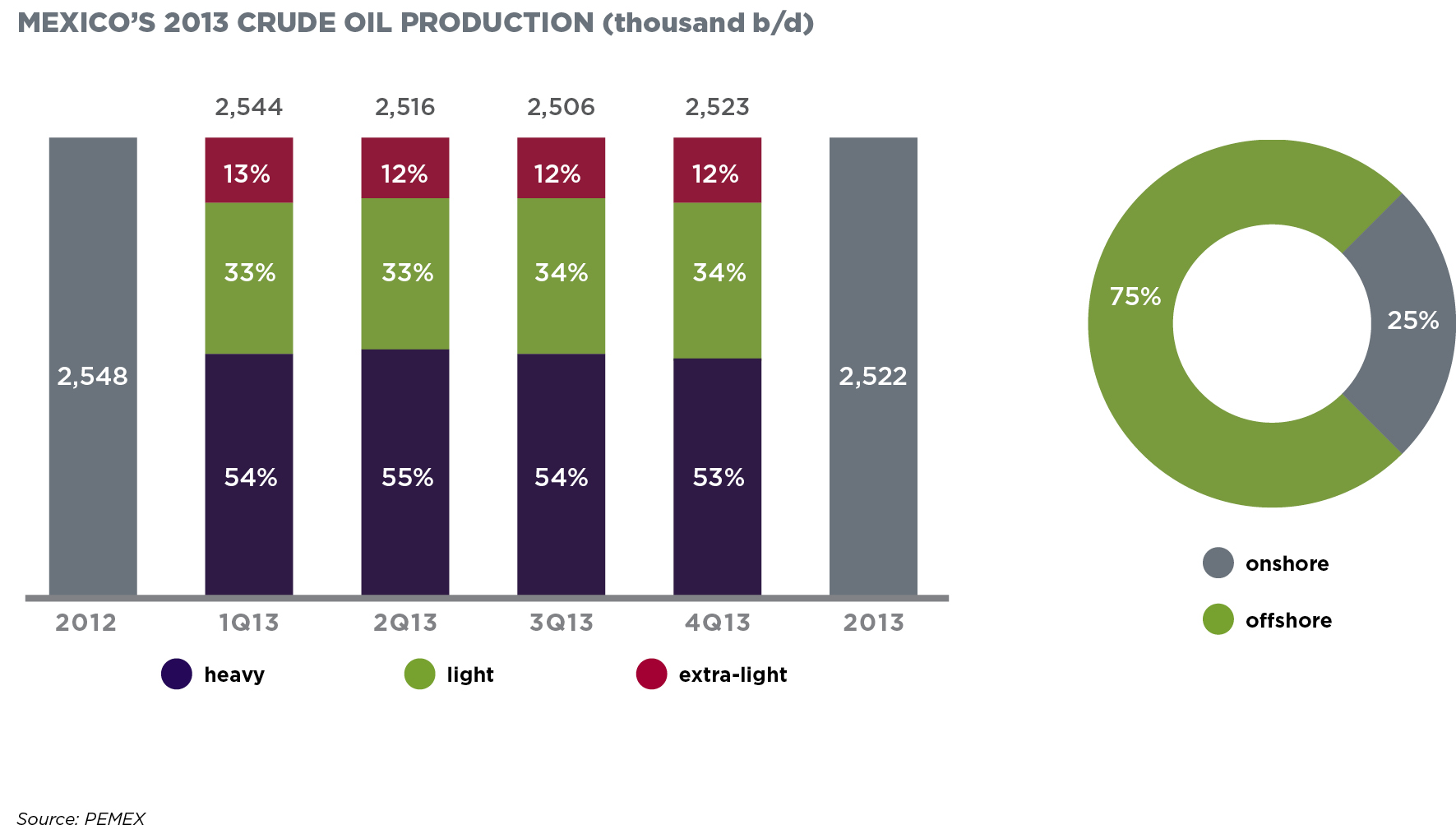 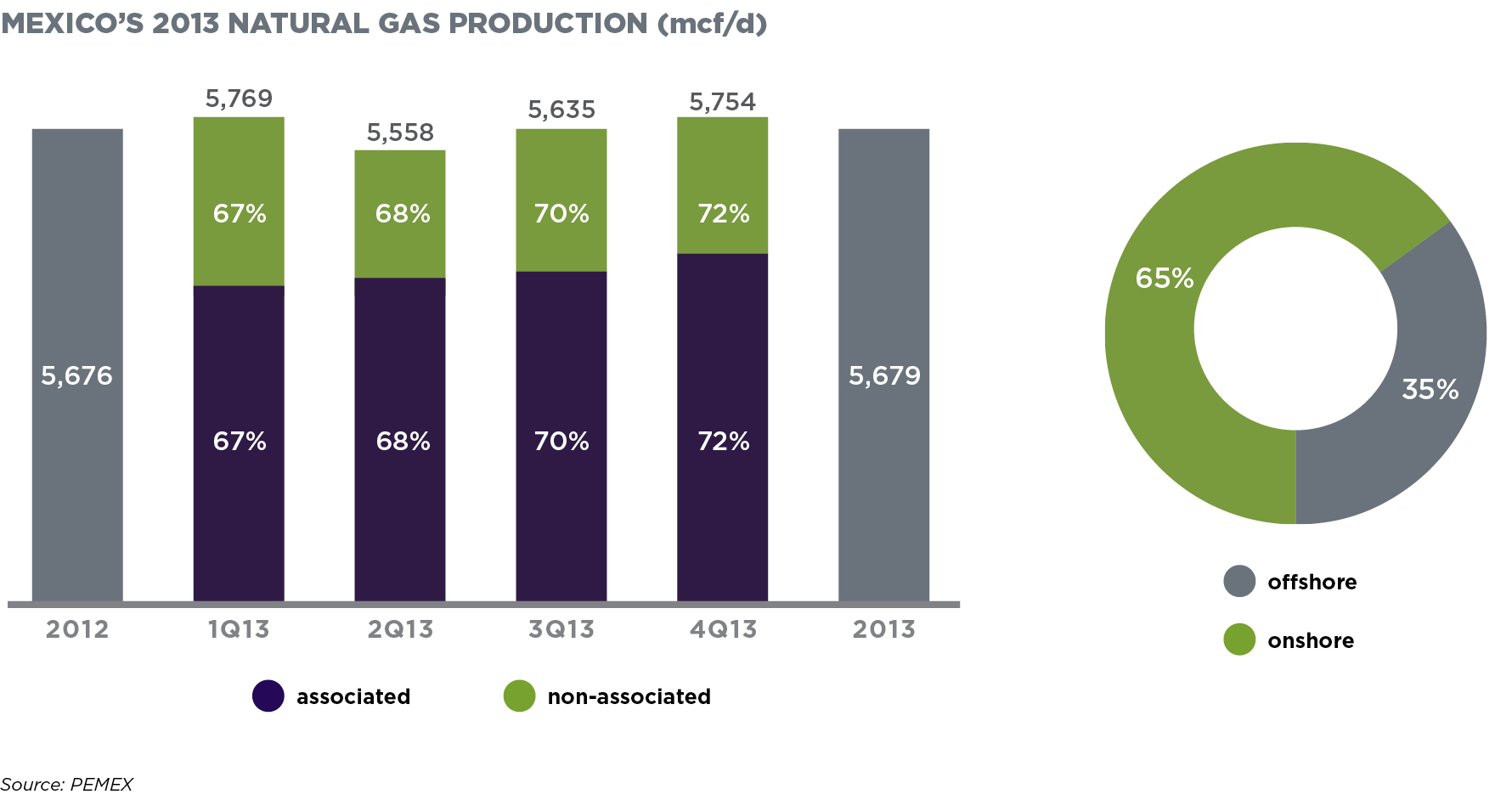 For the third year in a row, PEMEX tendered mature fields through the integrated service contracting (ISC) model. During 2013, PEMEX introduced its third round of ISCs for private operators in Chicontepec, with six blocks going up for offer: Humapa went to Halliburton, Miquetla was awarded to Grupo Diavaz’s Operadora de Campos DWF, and Soledad was secured by Baker Hughes’ Petrolite. The tenders for Amatitlán, Pitepec, and Miahuapan were declared deserted by PEMEX E&P. 2013 also marked a turning point for the industry’s contracting framework. The Energy Reform allows new contracting models in the Mexican oil and gas industry, including the oft-used service contracts, as well as profit-sharing models, production- sharing agreements, and licenses. 2014 marks the first year for these contracts to be introduced into the industry.

PEMEX’s crude oil processing in 2013 increased by 1.9%, year-on-year, to reach 1.222 million b/d. This was primarily the result of improved operating performance of the overhauled plants in the Minatitlán refinery. Heavy crude oil refined in 2013 accounted for 40.3% of the total crude oil processed by the National Refinery System. PEMEX’s usage of its primary capacity increased to 73.1% of total capacity. Natural gas processing increased by 0.5% as compared to 2012 in response to the increased availability of sweet wet gas from PEMEX’s Northern region. Additionally, condensates processing increased by 1.3%, due to an increase in the supply of sweet condensates from the same region. This helped dry gas production increase by 1.8% (65mcf/d). However, natural gas liquids production recorded a decrease of 1% due to a decrease in the supply of sour wet gas in PEMEX’s Marine regions.

PEMEX’s petrochemical production saw a considerable 12.47% spike from the 4.85 million tonnes throughput of 2012. The increase, which brought the total production of petrochemicals to 5.46 million tonnes, is explained by a 442,000 tonnes accretion in the aromatics and derivatives chain due to the stabilization of the continuous catalytic plant and the regularized operations of plants at the Cangrejera complex. As a consequence of this ramp up in aromatics, the production of other petrochemicals including hydrogen, pentanes and benzene, toluene and xylene also increased. This increase was partially offset by a decrease of 19,000 tonnes in production in the methane derivatives chain, mainly ammonia. This came in response to a decline in demand for this product due to adverse weather conditions impacting agricultural production. There was a further decrease of 136,000 in the production of ethane derivatives due to the transition of the operation of the Pajaritos Petrochemical Complex from PEMEX to the joint venture between PEMEX Petrochemicals and Petroquímica Mexicana de Vinilo in September 2013.

During 2013, PEMEX’s accumulated accident frequency index lowered to 0.57 accidents per million work hours. This represents a 6.6% decrease against 2012, mainly due to the 39.5% accident reduction in PEMEX Refining’s operations. PEMEX Gas and Basic Petrochemicals also recorded a 17.1% decrease in accidents, while PEMEX E&P reduced its accident rate by 12.5%. These reductions were accomplished due to a 36% decrease in PEMEX Refining workers injured (51 total accidents), 18% in PEMEX Gas and Basic Petrochemicals, and 10% in PEMEX E&P’s (70 total accidents, out of which 42 were sustained in the Drilling Business Unit). PEMEX Petrochemicals, on the other hand, saw an increase of 43% in workers sustaining accidents, which increased its accident frequency index by 71.4%. By the end of 2013, PEMEX’s accumulated accident severity index registered 32 lost days per million work hours. This was the exact same figure obtained in 2012. PEMEX Refining was the only one to show a decrease in this index, with 45% compared to the year before. PEMEX E&P’s Drilling Business Unit registers 56.2% of the total downtime for the company, with 3,071 days out of the total 5,466 days that PEMEX lost due to injury.