Do You Miss Soccer? eLiga MX BBVA Comes to the Rescue

Playing sports is undoubtedly a healthy habit of more than 42 percent of the Mexican population according to INEGI. But talking about sports is more than talking about health. Soccer in Mexico is the most popular sport. It has a predominant presence on TV and in a study carried out by HR Media in 2018, seven of the 10 sporting events with the highest audience were soccer matches, including the MX League Finals, the MX Cup and the friendly Mexican club matches.

According to the consultancy firm Mitofsky, more than 58 percent of Mexicans are fans of this sport. If there are about 89 million adults in Mexico according to INEGI, we could estimate that soccer fans are around 53 million people. Besides soccer being a sport that kick by kick wins the euphoria of its fans, it is also a sport that has a major impact on the country's economy. The MX League presented a report prepared by the Group of Economists and Associates (GEA) that stated the Mexican soccer industry represents 54 percent of the GDP generated by all sporting activities in the country and 25 percent of the GDP from the entertainment industry. This means that soccer represents approximately MX$114 billion (US$4.8 billion) which accounts for 0.4 percent of Mexico's total GDP.

Unfortunately, without the possibility of implementing social-distancing measures, soccer has been affected by the COVID-19 pandemic. Yet, creativity has once again surpassed the sports disaster. The MX League has released a new initiative to play soccer tournaments without leaving your home: the eLiga MX BBVA. This concept was announced in early April and is prepared to operate as a mirror tournament for the top Mexican soccer club competition. This tournament will have the same format as the traditional tournament: 18 teams playing in 17 rounds to achieve one of the eight positions in the league and later to win the much-desired championship.

The only difference is that the league will be played virtually through a PlayStation console and the FIFA 20 video game. Each of the 18 competing teams is expected to choose three players to be their official "gamers" in the eLiga MX BBVA. This means that Mexico City fans will be able to continue watching classics like América versus Pumas. Games are officially announced on Twitter and the plan is to schedule three matches per day expect on Thursdays. The kickoff game was on April 10 at 14:00hrs (Mexico City Time Zone) between Necaxa and Monterrey. All matches will be available on free and cable TV. Day 2 of the second round starts today with three scheduled matches: Pumas versus Juarez, Chivas against Pachuca and Monterrey versus Monarcas.

Here you can find the upcoming games! 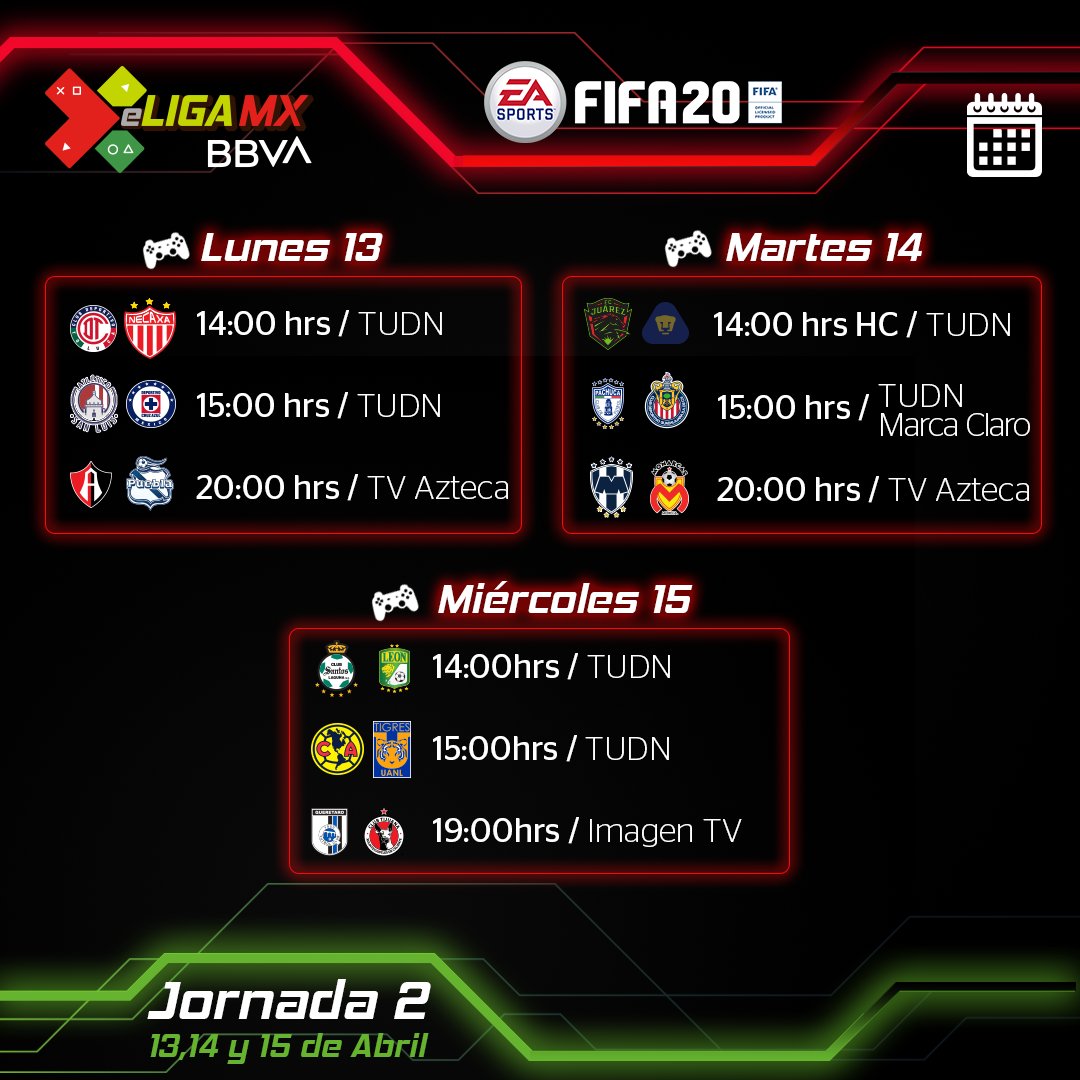