As Mexico heads toward economic recovery, risks remain, driven mainly by government policies, according to a study by market intelligence and advisory firm FrontierView. But the country’s external sector has greatly benefited from the strong US economic recovery and President Joe Biden’s US$1.9 trillion stimulus package.

“Mexico will capitalize more than any Latin American market from the robust growth the US economy will experience in 2021, which will continue to lift Mexico’s external sector. Joe Biden’s stimulus package, coupled with the reopening of the service industry in the US, all but guarantees that remittances inflows to Mexico will remain positive in 2021, sustaining the consumption outlook,” FrontierView said in its report.

Domestically, companies in the country will continue to deal with a “hostile operating environment” stemming from the policies of President Andrés Manuel López Obrador’s administration that affect investment, particularly toward the energy sector, FrontierView said. “Depending on the outcome of the upcoming elections, López Obrador might try to push forward other initiatives, such as a tax reform or a further rollback of the 2014 Energy Reform, which will continue to affect private investment, currently the weakest element in Mexico’s GDP,” the report reads.

Although the vaccination process has picked up speed in Mexico City as the election draws near, FrontierView notes that Mexico is likely to continue struggling to curtail the pandemic at a faster pace because of the slow vaccine rollout at a national level. “Companies’ growth strategies should prioritize the segments that rely heavily on the US business cycle and key government spending priorities throughout 2021.”

According to FrontierView’s report, Mexico’s GDP will rebound by 4.1 percent in 2021, mainly driven by exports (4.9 percent) and consumption (5.2 percent). “The better-than-expected US economic recovery at 6.5 percent will lift Mexican exports and the key manufacturing sector, keeping remittances inflows positive throughout 2021,” the company states. Starting in 2Q21, economic activity will rebound after the expected contraction in 1Q21 due to the dire situation generated by the pandemic in key retail hubs such as Mexico City. “However, companies should expect weak investment in 2021 due to López Obrador’s policies.”

Countercyclical measures implemented by countries, such as fiscal support or direct capital transfers to businesses and households, played a key role in lessening the impact of the pandemic, said Ángel García-Lascurain, President of the Mexican Institute of Finance Executives (IMEF), at Mexico Business Forum 2021. In 2020, almost 18 percent of the UK’s GDP consisted of resources that its government injected into businesses and households. France injected 15 percent of its GDP and Germany 14 percent. Meanwhile, Latin American countries such as Brazil injected 4 percent of GDP into their economy. “In Mexico, we did not have that support. There were not enough measures to preserve jobs, support the liquidity of companies and support families’ consumption habits,” García-Lascurain said.

According to INEGI, more than 1 million SMEs have shutdown permanently in Mexico. “Job creation will remain weak throughout 2021, mainly driven by lackluster investment. Firms should expect that consumer spending will be sustained by cash transfer and remittance inflows in 2021 and that the labor market is poised to recover to pre-pandemic levels in 2022,” states the FrontierView report.

Mexico also has a key advantage over other emerging economies: its proximity to the US, said Carlos Hurtado, Director General of the Centre for Economic Studies of the Private Sector (CEESP) on June 1, during a forum organized by CCE. Hurtado added that the opportunities for Mexico's economic reactivation are mainly in sectors like manufacturing, tourism and food. “The strength in the manufacturing sector lies in replacing the spaces that are being hollowed out by the trade war between China and the US, taking opportunities offered by companies that are not going to relocate to places like Thailand,” he said.

In 4Q20, Mexico’s GDP grew 3.3 percent quarter-on-quarter, driven mainly by exports and government spending. Agriculture and manufacturing supported the recovery as the former grew in 4Q20 on an annual basis at 4.9 percent on the back of US demand, while manufacturing grew 3.9 percent led by the ongoing US recovery, according to FrontierView. “Investment remains the weakest GDP component, declining by 13 percent year-over-year in that same period.”

FrontierView's analysis highlighted that in the best-case scenario, Mexico will see economic recovery by 2022, with a 10 percent probability, mainly through these key drivers:

The worst-case scenario, with a recovery forecast for 2028 and a 35 percent probability, depends on the following elements:

The 55 percent probability scenario, meanwhile, projects a recovery by 2024 under the following conditions: 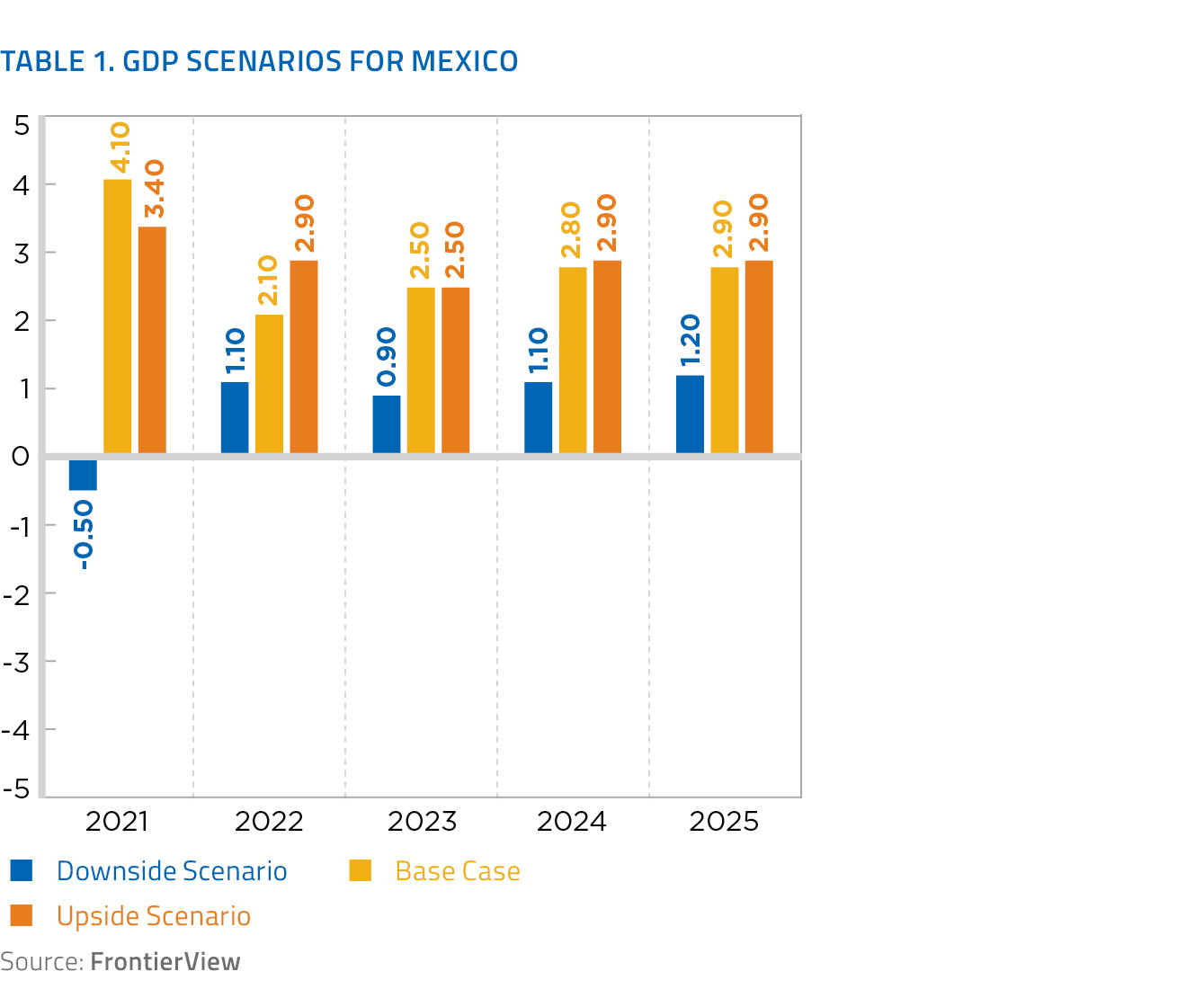 As the country struggles with economic recovery, FrontierView states that companies should prioritize segments that rely heavily on the US business cycle and López Obrador’s government spending priorities, like energy infrastructure projects. For B2C companies, the focus should be on prioritizing the northern and manufacturing states due to their connection to the US financial market. “Industries will continue operating, even if cases spike again, as they are part of the essential industries considered within the COVID-19 traffic-light alert system,” suggests the advisory firm. Companies are also advised to strengthen their value-added proposition, as “customers are likely to remain price-sensitive,” and to take into account changes in demand across markets and segments at the domestic level, given a slow recovery in Mexico in 2021 and divergences across segments and states, the report says.

Companies with a B2C model are advised to monitor the recovery of the automotive, electrical, agro-export and machinery and equipment industries, along with that of the states in the Bajio region, “as these will benefit from pent-up demand from the US throughout 2021.” The adjustment in pricing strategies following the latest uptick in inflation should also be taken into account, but FrontierView warns that inflation is likely to converge within Banxico's target range by 3Q21. Investment in e-commerce channels and an alignment with all supply chain partners to prevent disruption from waves of contagion are also part of the move for these companies.

In the case of companies with a B2G model, the government is expected to continue prioritizing social spending and energy infrastructure projects run by PEMEX and CFE. To get the upper hand, FrontierView recommends targeting projects from those companies across Mexico, as both of them will invest in refineries and LNG facilities representing approximately US$5.7 billion. It will be key to adjust government engagement strategies at the state level and target key advisers from potentially elected governors in the upcoming elections, as well as to continue monitoring federal budget spending and fiscal developments, “as the government of President López Obrador will continue to rely on non-oil revenues to finance its priorities,” states the report.