The Road to Economic Recovery

In 2020, Mexico faced a dark economic scenario. The severity was clearly evident in the economy’s bottom line at the end of the year: GDP plummeted 8.5 percent, its deepest drop since 1932. Over a year into the pandemic, expectations for Mexico's economic recovery have fluctuated amid a climate of uncertainty. The debate on inflation control, investment attraction through public policies, fiscal incentives to mitigate the impact of the crisis and the political agenda of President Andrés Manuel López Obrador's administration has intensified in recent months. With the vaccination of senior citizens in Mexico starting on Feb. 15, hopes for an economic revival arose among private investors. Still, there are many obstacles on the path to economic recovery. 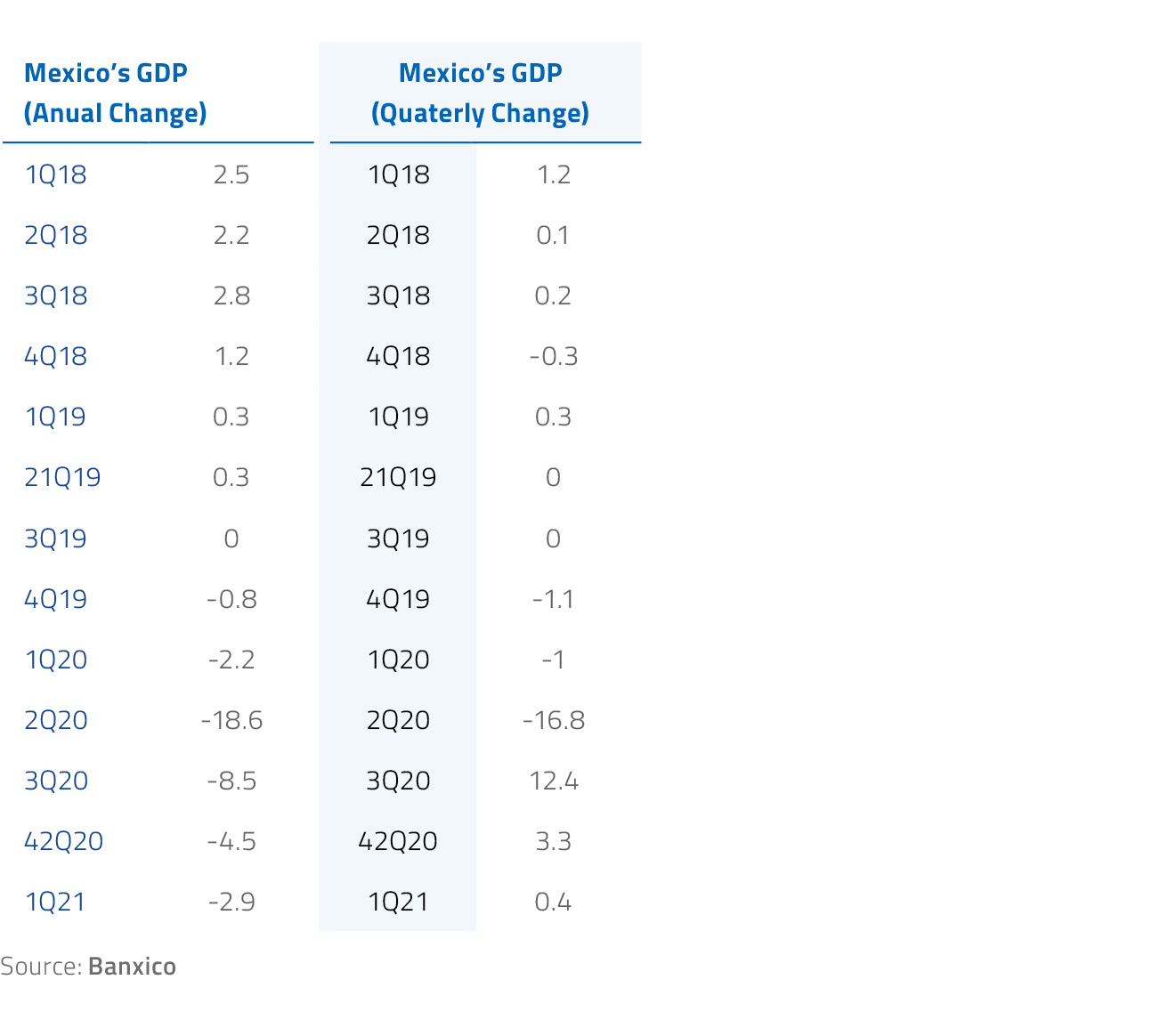 Much of the country's economic recovery will be driven or affected by Mexico’s largest trading partner, the US, as well as the speed of the vaccination process, said geopolitical risk strategist and Associate Practice Leader Mexico and Central America at FrontierView Alejandro Valerio. “Mexico needs to ramp up the vaccination rollout if it wants to reach the expected economic recovery,” he says. Investors in Mexico, however, will continue to face a challenging environment in 2021, a FrontierView study reveals. López Obrador's policies opposing private investment, along with the lack of financial support for SMEs, are among the main factors that hinder Mexico's economic recovery, the study says. As of March, more than 1 million SMEs have closed, resulting in losses of MX$500 billion (US$25 billion), INEGI figures show.

While some segments, such as the services sector, are beginning to show signs of recovery, others, including tourism and automotive, still have a long road ahead. Yet, the decline in Mexico's economic activity softened in March, mainly due to the easing of lockdown measures and the reactivation of some activities considered non-essential in Mexico City. According to INEGI's Timely Indicator of Economic Activity (IOAE), the Overall Indicator of Economic Activity (IGAE) increased 0.71 percent compared to last February, its strongest growth in five months.

Business leaders in Mexico are also concerned about the uncertainty surrounding the June 6 elections and their potential negative effect on the economic recovery. MORENA’s absolute majority in the Chamber of Deputies will be at stake. According to PwC’s Global CEO Survey, 83 percent of respondents in Mexico said that political uncertainty in the country is the biggest concern this year, followed by populism (79 percent) and pandemic and fiscal policy uncertainty (74 percent).

Meanwhile, there is still the lingering issue of the COVID-19 pandemic. “COVID-19 cannot be defeated if society, government and the private sector act on their own. We need to team up because vaccines are a success of science but a failure in terms of application logistics in Mexico. Unfortunately, the federal government is not doing enough,” said Enoch Castellanos, President of the National Chamber of the Transformation Industry (CANACINTRA), in an article for MBN.

Despite the positive impact triggered by the new fiscal policy direction in the US, the Mexican economy will not return to pre-pandemic levels before 2023, according to a study by the International Monetary Fund (IMF). Mexico lacks strong fiscal support and weak investment is expected to continue. The country spent less than 1 percent of GDP on fiscal stimulus, IMF data show.

The agency expects Mexico's GDP to rebound by 5 percent this year and then expand by 3 percent in 2022. The is somewhat short of López Obrador’s expectations. He recently said that the Mexican economy is showing a V-shaped recovery. “We have implemented a strategy for economic recovery that is working for us. We are going to recover faster from the economic crisis than other countries. I said it was going to be like that, in a 'V', and it is being achieved," he said on April 9 at his morning conference. 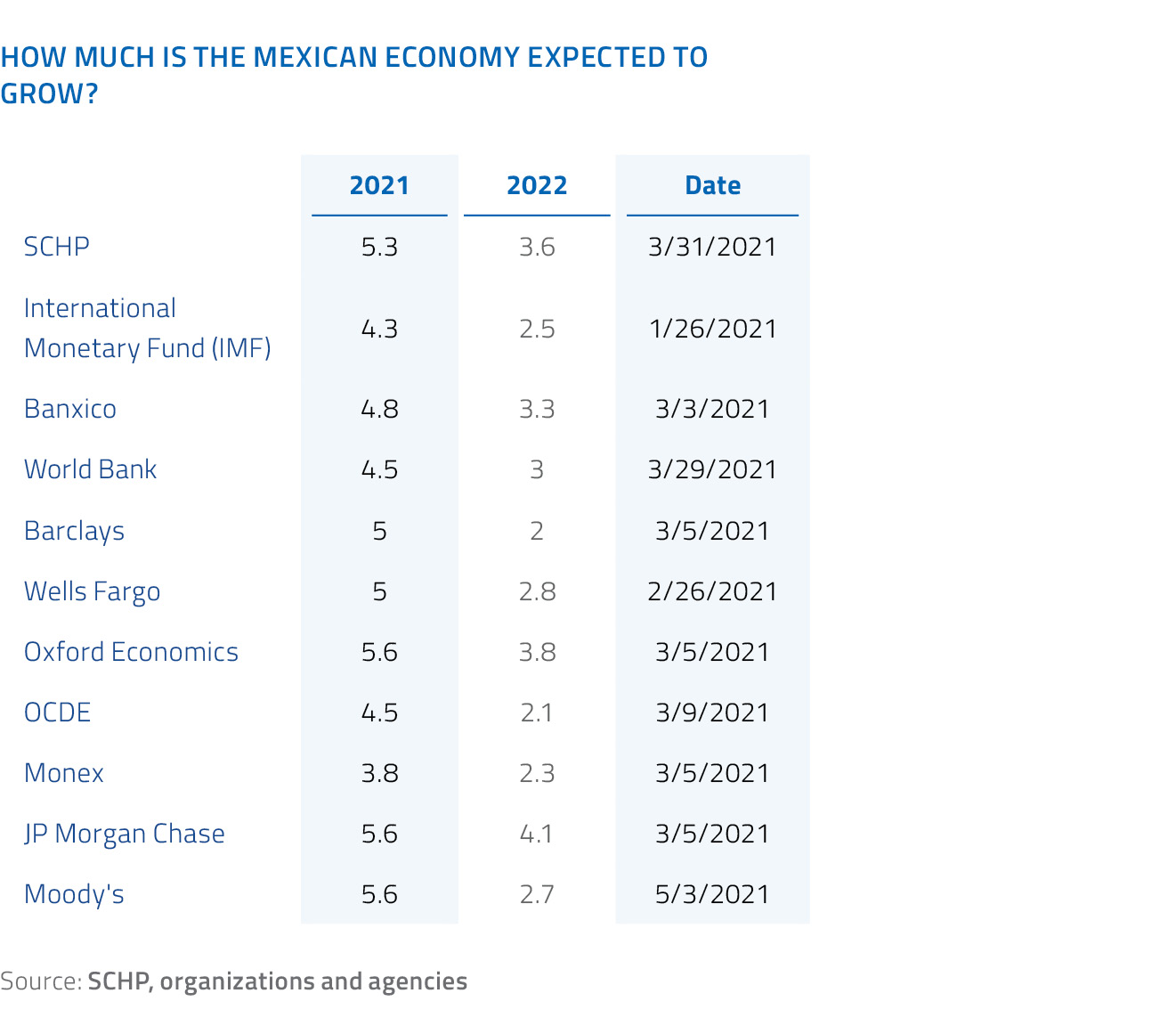 Employment, another indicator of economic recovery, has slowly picked up in Mexico. As a result of the pandemic, 647,710 jobs were lost in 2020, 560,473 of which were formal and 87,237 were temporary, according to the latest figures published by the Mexican Social Security Institute (IMSS). In Latin America, only two-thirds of those who lost their jobs at the start of the pandemic in Brazil, Chile, Colombia, Mexico and Peru were employed by the end of last year, mainly in the informal sector, states the International Labor Organization (ILO). In February, 500,000 Mexicans joined the informal economy, bringing the total to 29.4 million people, according to INEGI.

Unemployment withdrawals recorded by the retirement fund administrators (Afore) in 1Q21 also herald a slow recovery. According to data from the National Commission of the Retirement Savings System (CONSAR), Afores registered a total of 452,605 unemployment withdrawals in 1Q21, which meant an outflow of MX$5.09 billion (US$257.4 million). This is the highest figure recorded for a similar period since 2005. It also meant an annual increase of 37.3 percent in real terms. Although 251,977 formal jobs were recovered in 1Q21, the figure falls short of the 269,143 jobs created in 1Q19, IMSS data shows. 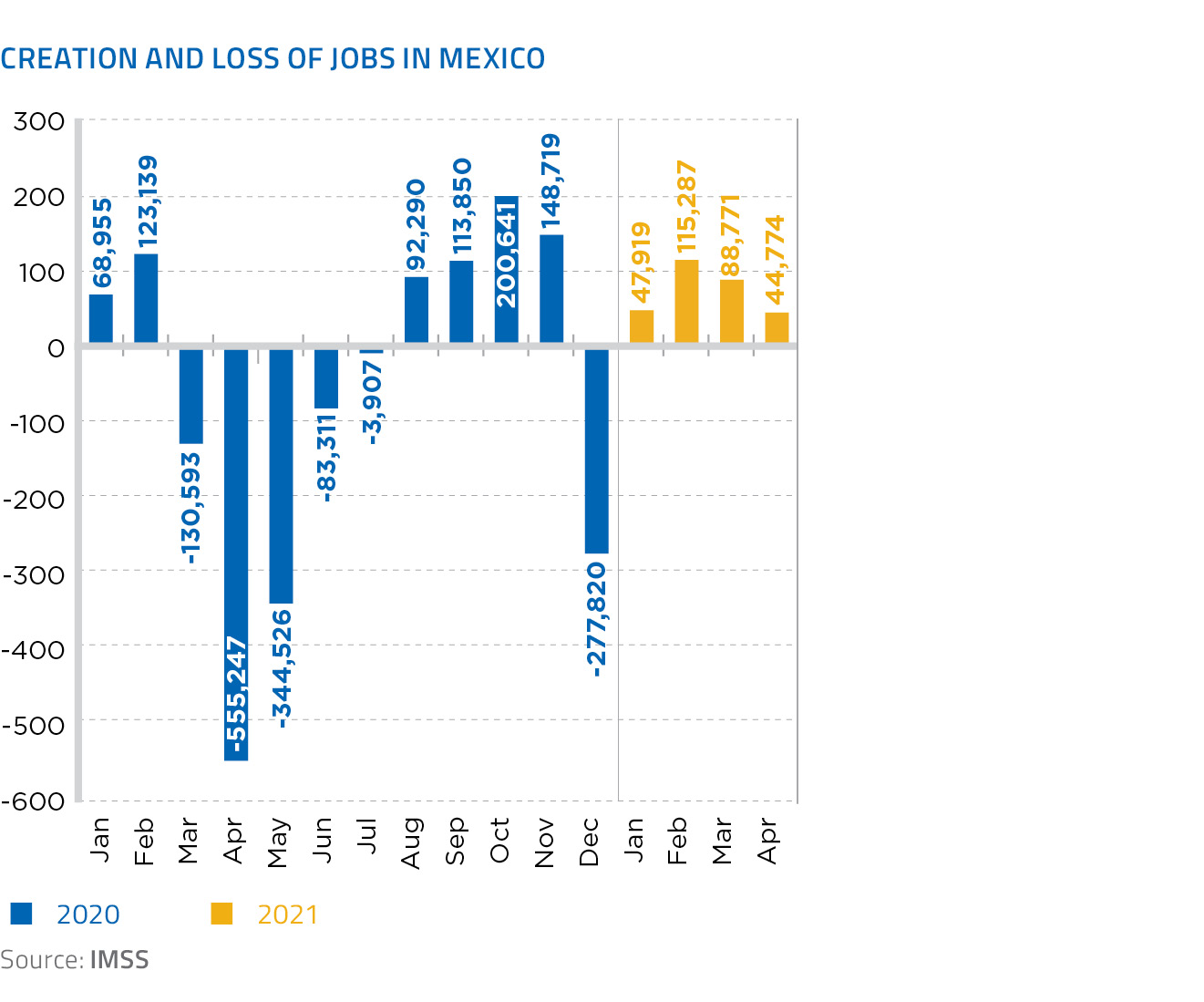 The US, Catalyst for Mexico

In the US, forecasts for the economy have also brightened in recent months, driven mainly by President Joe Biden's recent US$1.9 trillion coronavirus relief package and a massive vaccination campaign across the country.

Testifying before Congress on March 23, Secretary of the Treasury Janet Yellen said the economy is set for strong growth this year. However, she pointed out that at least 9.5 million jobs are still missing from the labor force and that full economic recovery depends on bringing the pandemic under control. There, many Republican policymakers, investors and economists expressed their concern that the economy will not be able to absorb a massive stimulus package and post-pandemic consumer spending, pushing prices sharply higher. Dangerous inflation cycles, they worry, will force the Federal Reserve to raise interest rates, unleashing a new recession.

Given that scenario, monetary policy will be key for economies to achieve growth. On March 4, Federal Reserve Chair Jerome Powell told investors he did not assure that inflation and bond yields will be under control when the pandemic ends and economic activity rebounds. For several years now, the Fed has been targeting 2 percent annual inflation without much success. In August, the Fed released a policy framework that said it would temporarily tolerate inflation creeping above 2 percent and that inflation would have to be on that path before the Fed would consider responding with an interest rate hike. This is not expected to happen before 2023, Powell said in mid-April.

In Mexico, monetary policy is driven by a hawkish view. At its last monetary policy decision meeting on May 13, Mexico's Central Bank (Banxico) unanimously decided to hold the target interbank rate (TIIE) at 4 percent after cutting it by 25 basis points in February. The five-member board decided to leave its monetary policy unchanged due to the recent pick-up in inflation, which stood at 6.07 percent at an annual rate in April, a level twice the central bank's target. Banxico said that the balance of risks that could affect the expected path of inflation over the forecast horizon is bullish. These include external inflationary pressures, cost pressures or reallocation of expenditure, persistent core inflation and exchange rate depreciation. 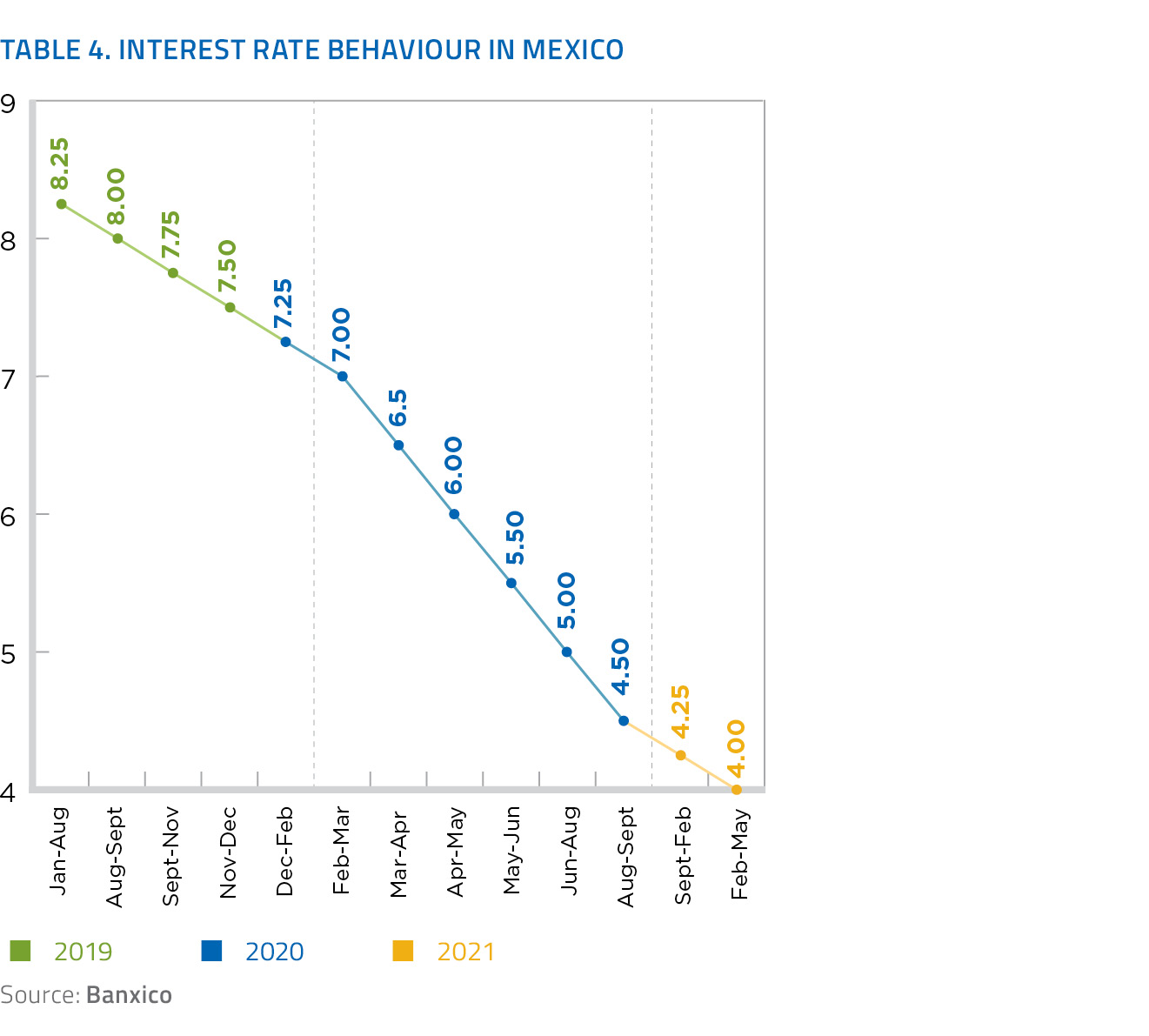 According to Banxico, short-term expectations for inflation rates indicate a hike against current TIIE figures. However, the bank estimates that by 2Q22, the rate should be around the long-term goal of 3 percent. “The governing board will take the necessary actions to maintain a reference rate that is in line with the orderly and sustained convergence of the general inflation toward the 3 percent goal,” said the bank in its latest statement.