Tapachula: Witness to the Storm and Calm in Mexico

In the beautiful and immense concept known as time, which dictates the duration of things throughout the ages, periods, weeks, days and hours, we will talk about the events that have impacted Mexico, and mainly Chiapas, from 2018 until 2020. Time, as relative as it is, is an immense sea that we have to navigate throughout our lives and which presents different peculiarities. For some, and even for the same person, this sea can be perceived as an intense storm or seen in total peace.

For Mexico, 2018 marked the beginning of a sea of both storm waves and tranquility. That year marked the change in the context in which we live and created circumstances that have affected our environment, economy and our lives as Mexicans and individuals. In July 2018, Mexico embarked on an unprecedented transformation in its political seas that still helms our country today.

In October 2018, an urgent migratory phenomenon was triggered in our country, at our Central American border, specifically in Chiapas in the Soconusco region, Tapachula and Ciudad Hidalgo, from Tecún Umán in Guatemala, with the arrival of immigrant caravans in numbers not seen before.

Upon learning of the arrival of the first wave (which looked like a tsunami), the city of Tapachula in Chiapas coordinated a fast response to the situation. In an extraordinary event of historical and surgical “Fast Track” planning, the city of Tapachula, multisectoral business leaders and the City Council of Tapachula articulated a defined 18-hectare space in 12 hours to receive and attend the caravans with the basic services of first impact attention.

During more than 72 hours, they supported various actors, including Tapachulteca citizens, national and international NGOs, human rights groups and religious institutions, as well as the integration of the state government with its valuable Ministry for Civil Protection, the federal government through the participation of the National Migration Institute (INM), while the Army and the Navy operated food services, and implemented health and safety safeguards. In addition to the fact that care was taken at all times to ensure compliance with the universal declaration of human rights, which was a common denominator, medical care, food, leisure activities and security were imperative.

Historically, Chiapas has been a migration-related state. The mid-19th century saw the arrival of pioneers from California; the early 20th century saw the arrival of Germans, Swiss, Italians, Japanese and Chinese; and after the Second World War, the area received Spanish, Lebanese and families of French descent. Therefore, and for a long time, our human forms have presented a very wide range of skin color and physical traits and we have a fusion of customs, including cultural and gastronomic. The only constant factor is the diversity of beauty. All this added to the beauty of Tapachula and the Soconusco region, which has fertile volcanic lands, with 150km of Pacific Ocean coastline, as well as the presence of the Sierra Madre del Sur with unparalleled natural resources and beauty.

The immigrants who arrived between the 19th and 21st centuries set the pattern for this region's economic, social and cultural development and, curiously enough, each of them produced sectoral lines of economic activity that remain today. These can be represented in a Mind Map that contains 7 Basic Ideas of Order: the American participation, the Chinese inclusion, the articulation of the Germans, the broad Spanish participation, the Japanese, Lebanese and French: 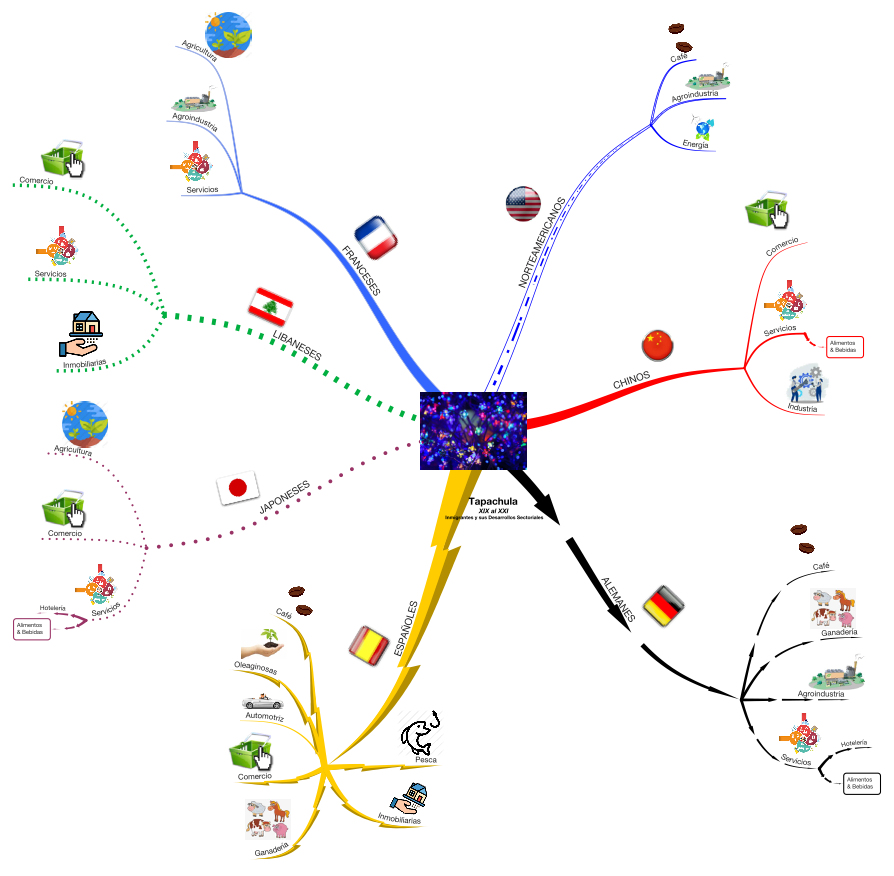 Based on the above and the map presented, it is important to highlight how immigrants from Eastern countries have a strong sectoral orientation in the arts of commerce. They are in charge of grocery stores, hardware stores, supermarkets and cash and carry centers, while a common denominator for the services sector, such as management and ownership of restaurants, food and beverages are the people from those of European and North American origin. In the region today, the three sectors of our economy have a percentage distribution of 63 percent in commerce and services, 20 percent in agroindustry and 17 percent in agriculture, livestock and fishing. Additionally, 92 percent of Chiapas’ exports are generated in Tapachula.

It should also be noted that the Centro-American Corridor has an estimated market value of US$9.2 billion, compared to Guatemala, which generates US$2.1 billion. This means that there are great opportunities to develop economic and tourist corridors, inter-port connectivity, knowledge and technology transfer and, of course, integral attention to the migratory flow.

To end our story, in December 2018, the attention on what became a mega shelter of 18 hectares continued but due to various factors at the end of the year there was a slowdown in the arrival of migrant caravans. However, the events would accumulate and emerge again at the beginning of 2019, which will be the subject of the next article.

In this way, 2018 gave way to the milestones that would mark 2019 and 2020, continuing the transformation of the region and the country's reality. In every sense, these same events would act as triggers with consequences but ultimately, they will provide us with the paths to establish channels of capitalization in the country's experience, decisions and development opportunities.