Uncertainty as Slowdown Sets In

Record sales and production marked the latter half of 2016 but a slowdown set in during the first half of 2017, marked by shrinking sales of light vehicles in the key US market. Uncertainty marked the previous 12 months, with the renegotiation of NAFTA spurring the country to cast an eye at alternative markets for growth.

As 2017 heads into the final stretch, Mexico retains its position as the 7th main light-vehicle manufacturer in the world but it has climbed up the ranks in terms of exports. In 2016, the country moved up one position to become the third-ranked light-vehicle exporter globally, behind Germany and Japan. The automotive industry represents approximately 3 percent of Mexico’s GDP and 18 percent of its manufacturing GDP.

Data for 2016 show Mexico achieved record numbers in terms of production, exports and sales of light vehicles. By the end of the year, production accounted for 3.47 million vehicles, representing a 2 percent increase compared to 2015. Of these, 2.77 million were exported, a rise of 0.3 percent year on year. With the arrival of Kia and Audi, not only did the country move up the international rankings, it also became the main vehicle exporter to the US.

In the domestic market, sales jumped 18.6 percent to more than 1.6 million units. Numbers from January to September 2017, however, suggest a slowdown in progress. Production and exports are exhibiting the strongest growth at 9.8 percent and 11.5 percent, respectively. Kia continues to ramp up its production and according to Eduardo Solís, Executive President of AMIA, other automakers have finalized platform updates that were the main cause of moderate production growth in 2016. Sales have decreased 1.1 percent between January and September 2017 compared to the previous year when they reached a total 1.106 million units. Solís and Guillermo Prieto, Executive President of AMDA, agree that the most likely outcome for the domestic market will be moderate single-digit growth for 2017 of no more than 5 percent.

impression in the domestic market after Mastretta's failure. The new OEM owned by parking lot manager COPEMSA has already released two full-electric models called M2 and M3. In terms of foreign investment, along with the entrance of Kia and Audi, Mexico attracted Chinese OEMs looking to target the Latin American market and eventually the NAFTA region.

In collaboration with Giant Motors, in which Slim’s Grupo Inbursa is a 50 percent owner, the Chinese brand JAC will begin manufacturing two SUVs at Giant Motors’ plant in Hidalgo. JAC has invested MX$4.4 billion (US$249 million) and production is expected to begin in 2018. A collaboration between Grupo Picacho and the Chinese maker BAIC also resulted in a new manufacturing project. Originally a distribution deal, Picacho and BAIC’s relationship transformed into a production venture. BAIC started manufacturing its vehicles at truck manufacturer Foton’s plant in Veracruz in April 2017.

Three more light-vehicle plants are expected to start operations no later than 2019. The Renault-Nissan Alliance in collaboration with Daimler is now building the COMPAS project in Aguascalientes, which is scheduled to begin operations by the end of 2017. The project will start with production of INFINITI models and will integrate Mercedes- Benz vehicles into the production line in 2018. BMW’s venture in San Luis Potosi is projected to start in 2019. The project is under construction but the company expects to have an annual production of 150,000 units of its Series 3 model when the plant comes online. Toyota also has a new plant in the works, scheduled to begin producing in 2020. The company’s facility will be located in Guanajuato and will focus on production of pickup models.

Despite an expected slower growth pace in 2017, Mexico has ambitious goals regarding production and development of the domestic market. According to Solís and Prieto, the country’s target for 2020 is to achieve production of over 5 million vehicles and domestic sales of 2 million units. Mexico seems to be on track for both targets although there are factors that could potentially present a risk to meeting these goals. The first consideration is the evolution of the international vehicle market. Due to the plunge in oil prices starting in July 2014, the market began favoring larger vehicles thanks to lower gasoline prices. In July 2014, the prices of a barrel of WTI mix peaked at

US$102.4 but then reversed fortunes until reaching its lowest point in February 2016 at US$30.6. Since then, the mix has regained strength but it is still below half of what it cost in 2014, sitting at around US$54 at the end of October 2017. According to Solís, Mexico’s production is highly dependent on the behavior of the US and Canadian markets and in both, demand is intricately linked with oil prices.

Solís does not seem concerned, however. “Although there is currently a preference toward larger vehicles and SUVs in the US, I would not expect Mexican plants to shift their production toward these models,” he says. Nevertheless, the country has already tasted its first disappointment due to receding demand for compact vehicles in the US. After canceling its investment in San Luis Potosi, Ford announced that its projected production of the new Focus would be relocated to its existing plant in Hermosillo. However, the company issued a statement in June saying that the company would transfer its production to China in an effort to further reduce costs. According to a statement from Joe Hinrichs, President of Global Operations at Ford Motor Company, the company will save US$1 billion by moving its operations to China, liberating budget to invest in its light-truck plant in Kentucky and new projects related to autonomy and electrification.

Since 1997, Mexico’s inflation rate has dropped steadily, maintaining below 5 percent since 2010 and hitting an all- time low of 2.72 percent in 2015. According to estimates from the International Monetary Fund and the World Bank, Mexico’s GDP grew 2.2 percent in 2016 to US$1.17 trillion. In its report The World in 2050, PwC forecasts that Mexico could grow at an inter-annual rate of 3.8 percent up to 2050. While the long-term outlook remains relatively unchanged, the economy in the short term has been hit by uncertainty in the wake of Donald Trump’s rise to the US presidency.

Trump started targeting the Mexican manufacturing industry in the second half of 2015, declaring that Mexicans were stealing jobs from the US. The rhetoric intensified in the last quarter of 2016 when prior to the US elections, Trump began to attack automotive companies directly via Twitter. His premise was that given Mexico’s unfair trade balance with the US, the ideal measure would be to slap a 35 percent tariff on vehicle exports coming from Mexico. The result was a wave of uncertainty among companies with manufacturing operations in the country. However, as a renegotiation of NAFTA moves forward, the Mexican government has stood its ground against Trump.

According to a survey conducted by Mexico Automotive Review 2017 with 184 executives of the national industry, uncertainty remains the main factor hindering companies’ competitiveness. Still, growth projections for Mexico are positive. According to Fitch Ratings’ latest review on Mexico’s perspective, the ratings firm has awarded the country a BBB+ mark, with an upgrade to “stable” from “negative.” According to a statement from the firm, “the risk of a negative scenario that could affect the competitiveness of Mexico’s exports is reduced now that the US seems to be taking a moderate position regarding the renegotiation of NAFTA.” 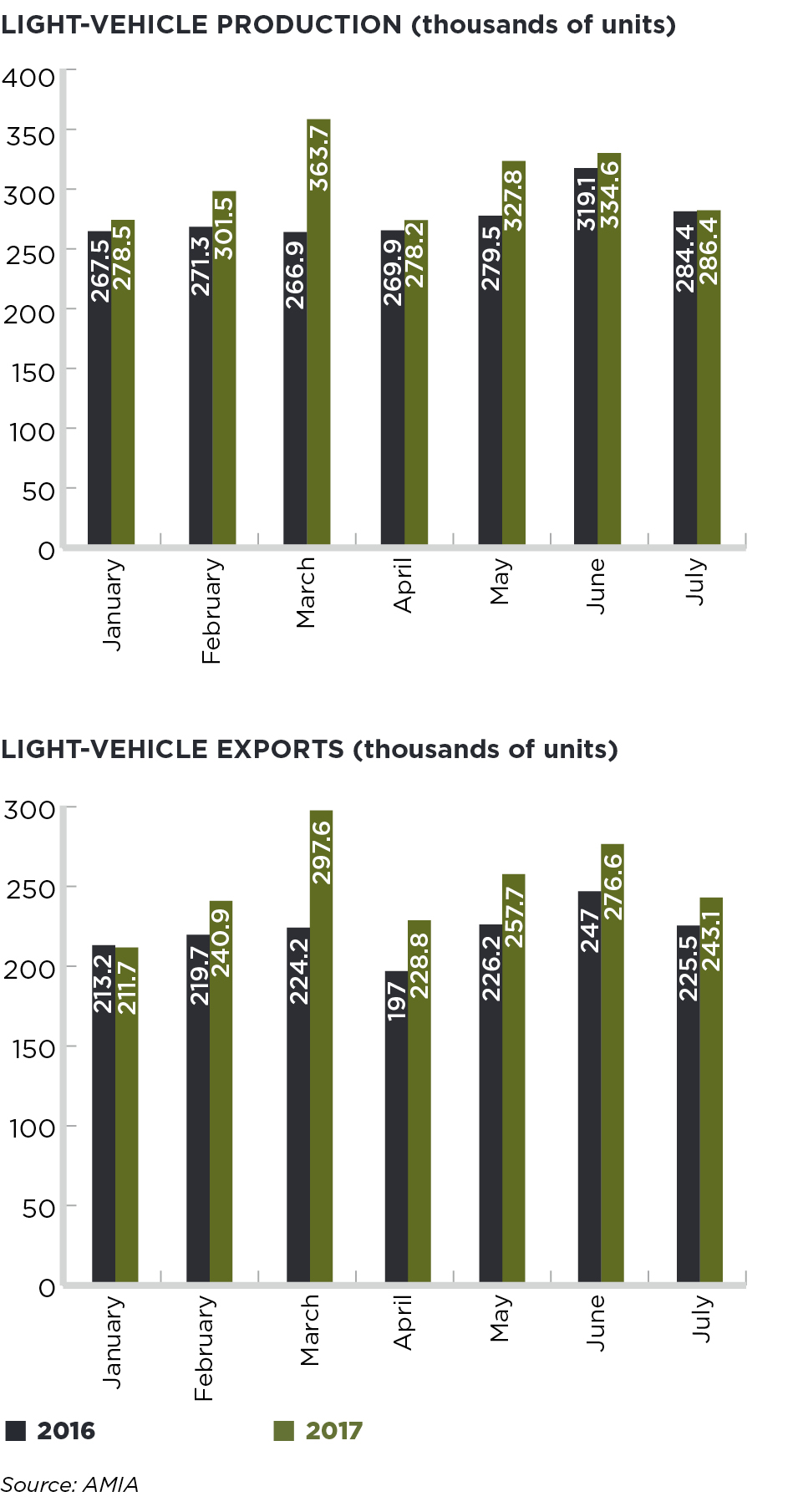 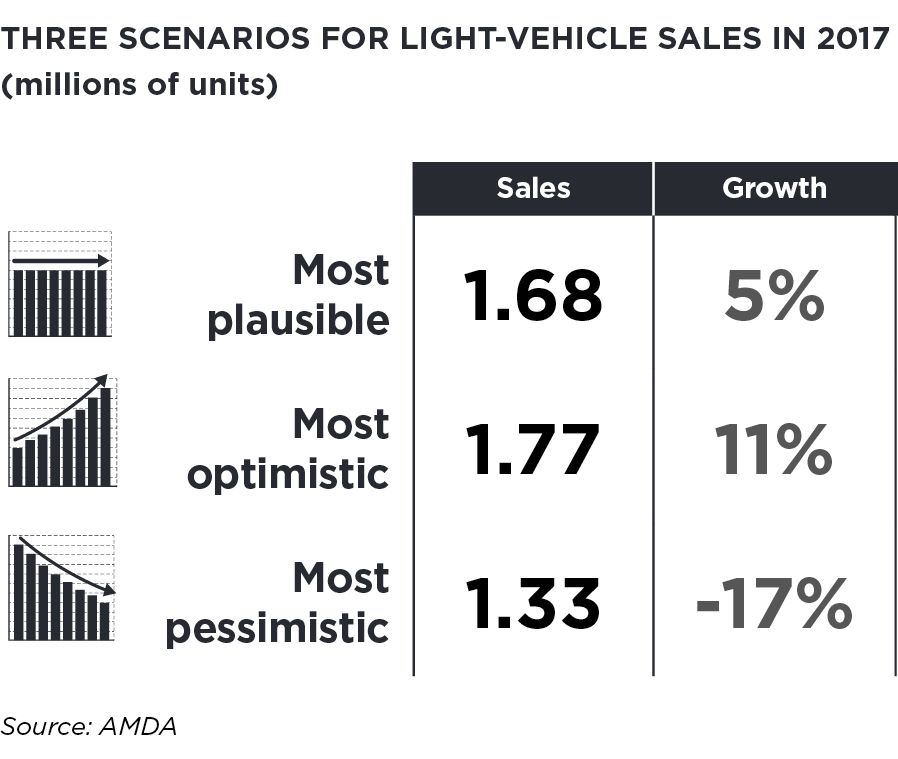