Museums Within Museums? The Promising Present of High Culture

Can you imagine seeing in the same gallery paintings by Velázquez, Goya, Dürer, Tiziano, Fra Angelico, Rubens, El Bosco, El Greco, Caravaggio, Raphael and Brueghel? Well, now it is possible. Madrid’s Museo del Prado, has reopened its doors this week after a profound reorganization of its enormous collection. The museum, one of the most important and famous in the world, has led the way the new normal by introducing the future of high culture. After being closed for three months due to COVID-19, the museum has made available to the public its 190 most representative works of art, which can be admired in the main gallery of the building in an exhibition called ‘Reencuentro’, while complying with the new normality´s strict rules. This decision has two goals: it limits the flow of public to a totally controlled area of the building and it adapts to the immediacy demanded by the new times, the so-called ‘instagramming’ of culture. Furthermore, it hopes to attract enough visitors that will counterbalance the losses caused by strict confinement regulations that lasted nearly three months. Seventy percent of ticket sales make up the museum´s total revenue, according to Museum officials. “Pandemics make human beings suffer and cause deaths. But, unlike what happens in wars, they do not destroy infrastructure. There may be different strategies behind the pandemic, but museums and their works will continue to be powerful objects of desire for tourists who are now crucial to their maintenance. One day people will lose their fear,” Javier Solana, President of the Royal Board of Trustees of Museo del Prado and former NATO Secretary General, told La Vanguardia.

According to El País, the global museum industry generates US$57.6 billion in revenue each year. Museums have become tourist attractions and most cities yearn to belong to the club of influential museums. A museum’s ability to change a city was demonstrated by the Guggenheim Bilbao, a building designed by Frank Gehry that turned a grey, industrial city in northern Spain into a bright, avant-garde tourist attraction. In Mexico, Puebla attempted to achieve a similar effect with its Baroque Museum, designed by Japanese architect Toyoo Ito, while David Chipperfield’s Jumex Museum and Fernando Romero’s Soumaya Museum, located in Mexico City, sought the same effect, albeit from the private sector.

The world’s museum industry is moving away from the precepts defined during the Enlightenment period and into the world of entertainment. A museum, although it could sound strange, is as important to tourism as a music festival, an amusement park or nice weather.

UNESCO, a cultural institution part of the UN, has recently published the report “Museums Around the World in the Face of COVID-19,” produced in collaboration with the Zhi Zheng Museum from Shenzen, China. The report states that 90 percent of the 95,000 museums in the world have been forced to close their doors as a result of the pandemic. UNESCO’s data includes information published by the Network of European Museum Organizations (NEMO). This institution published that major European museums have lost around US$700,000 a week since closing. According to UNESCO, public financing of these spaces is not in danger, although the institution says in its report that we will have to wait and see what happens with private funding. Fifty percent of the financing for the Louvre Museum in Paris comes the private sector. However, the Louvre was one of the first museum to prove the importance culture can bring, not only economically but culturally a well. The Louvre will receive US$1.2 billion for letting the Louvre Abu Dhabi use its name. Paris Louvre´s officials will advise on art purchases and lend part of its collection annually. By doing this, France saves one of its symbols while projecting its culture into a strategic area of the world’s geopolitical future. 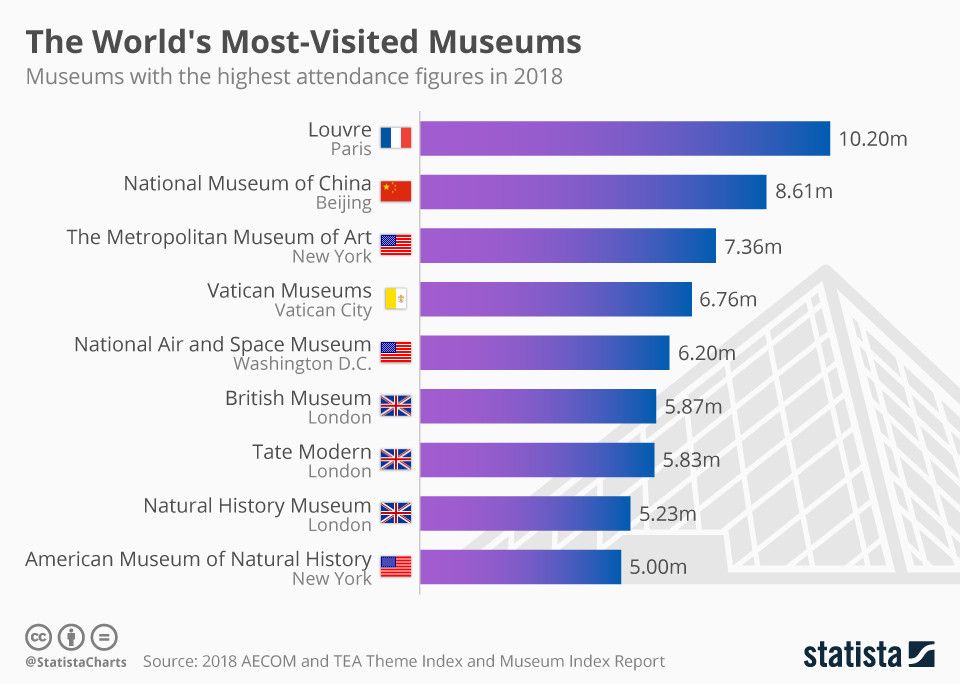 According to UNESCO, there are 1,320 museums in Mexico, all of them closed because of the pandemic). This represents an average of 10.5 museums per one million inhabitants. These stats are very similar to countries such as New Zealand, UK, Japan, the Netherlands, Portugal, Russia, Spain and Australia, all of which have more than 10 museums per one million inhabitants. Now, the goal for Mexican museums is to attract visitors and curve the economic losses caused by the mandatory closure.

According to Mariana Munguía, Coordinator of Visual Arts of the National Institute of Fine Arts and Literature (INBAL), the museums that depend on the institution, such as the National Museum of Art, the Museum of Modern Art, the Palace of Fine Arts, the Museum of Frida Kahlo and Diego Rivera and the Diego Rivera Mural Museum, will grant free access to all its visitors once Mexico’s confinement measures ease. This measure will most likely not help to recover the US$180,000 losses that INBAL’s museums generate on a weekly basis, but it will help to promote tourism and provide Mexico City’s citizens with essential cultural activities.

According to UNESCO, the future of museums worldwide depends greatly on tourism. The industry represents the main source of income for many cultural institutions. Furthermore, UNESCO reports museum staff and workforce has been reduced by 60 percent due to COVID-19. The International Council of Museums (ICOM) projects that 30 percent of the world’s museums are at risk of closing their doors in the short term as a result of the crisis.