Offering Cultural Tourism to the World

Q: How does Guanajuato compete against other tourism destinations in the country?

A: It is important for us to position Guanajuato as the country’s main tourist destination. We do not have beach landscapes or forests, but we can offer culture. The state has two cities on the list of World Heritage Sites: Guanajuato and San Miguel de Allende. We also have five Pueblos Màgicos: Mineral de Pozos, an abandoned mining town that has been rescued through tourism; Salvatierra, the first colonial city in Guanajuato with many Spanish influences; Yuriria, a beautiful city with a lake that was the first hydraulic construction in the Americas; Jalpa de Canovas, home of the Braniff, the pioneers of aviation in Mexico; and Dolores Hidalgo, where the independence movements were born. In addition, we have archeological sites with pyramids: Coporo, Cañada de la Virgen, Plazuelas and Labor de Peralta, and tourist routes like the convent route and the tequila route. Besides its tourist sites, Guanajuato offers a great variety of cultural events. We have the Guanajuato Gastronomic Festival, where we have received international and national chefs; we host the Vendimia Festival in August, where 80 percent of visitors are tourists; and the state celebrates an automobile rally, the international Cervantino Festival and Expo AgroAlimentaria, the most important agricultural fair in Latin America and one of the best in the world. All this has made Guanajuato the most important brand in cultural tourism in Mexico. We are the sixth-most visited place in Mexico and the first after sun and beach destinations.

Q: What challenges do you face in meeting the state’s tourism promotion goals?

A: We need more hotel capacity to receive guests. The airport is not large enough and besides cultural tourists, we receive a lot of business tourism from the automotive sector. The airport has increased its capacity from 800,000 passengers to 1.6 million in the last three years. However, we must accelerate and increase investment to enlarge the airport and we need to increase our number of hotels.

Q: How much is invested in tourism and what opportunities will help the industry grow in Guanajuato?

A: We have invested around twice of what was invested in the last few years: between MX$500 million and MX$600 million per year. So far, more than 160,000 families depend on tourism in our state and the sector is growing at a 12 percent rate every year. When this administration started, Guanajuato was the eighth-most visited place, today it is the sixth. The federal government supports us with only MX$15 million per year, a low figure if we compare it with the MX$30 million that it provided before.

Q: How is the state promoted to attract investment and to build stronger relationships with countries besides the US?

A: The Foreign Trade Promotion Coordinator (COFOCE) has been working in Guanajuato for 25 years. This coordination is older than ProMéxico and has helped us broaden our scope of trade. COFOCE is a permanent effort that works on all continents because diversification is key to our growth. Twenty-eight countries are investing in Guanajuato, including Japan, the US, Germany and France. The US is our main market and it will continue as such. The market is constantly moving and the reality of trade and industry overshadows intimidating speeches, such that 50 percent of what we export goes to the US. 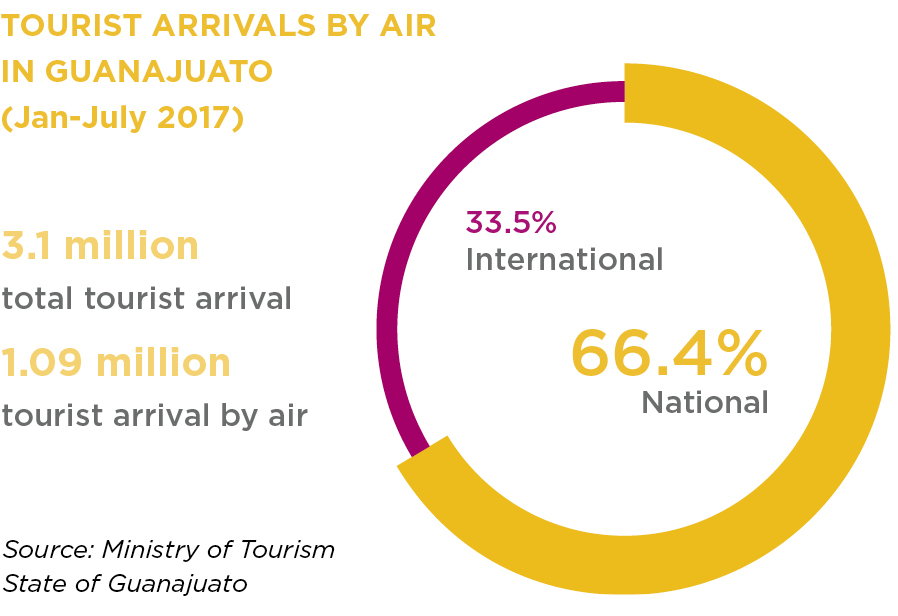