As a digital revolution sweeps across industries, technology development and a competitive communications system are keys to attracting investment. But as the revolution widens, the challenge of the 21st century for many companies is easier said than done: adapt to the needs of the people

Data is the main munition of the digital revolution and analytics has become the top weapon as companies vie for a competitive advantage. According to the McKinsey Global Institute, in 1986 only three exabytes (EB) of data existed; by 2011, the figure had gone up by more than 300 EB. Cisco Systems estimates that by 2021, annual global IP traffic will reach 1,000 EB, with global IP traffic increasing 127 times between 2005 and 2021.

Machine learning, automation and AI are leading the digital change and product and service personalization will become the rule, as more businesses adopt new technologies. Javier Cordero, President and Director General of Oracle Mexico, says the change has to do with a shift in paradigms. “The world is undergoing a digital transformation that has nothing to do with adopting technology but with empowering people,” he says.

Many “new” technologies have been around for a fairly long time but adoption in Latin American countries has been slow. In 2013, almost 60 percent of the digital universe was generated in established areas such as the US, Canada, Europe, Australia and Japan. However, data consulting firm IDC estimates that by 2020 this trend will shift and 60 percent of the digital universe will be generated by emerging markets, which puts Mexico on the path to opportunity.
Information, machine learning and AI are used for more than just personalizing products to the particular tastes of consumers. Bismarck Lepe, Founder of Wizeline, says that AI will allow intelligent automation. “Google leveraged its DeepMind project to manage its overall infrastructure and its data servers. The company was able to reduce its electricity costs by simply deploying DeepMind.” Lepe believes that the use of AI tools such as chatbots can contribute to higher productivity by automating activities such as human resources consultations. “One of the interesting things about AI is that it is creating a very human-like interface between data and customers.”

Although the tools are available, change itself does not come easy. Embracing a new digital strategy appears to be more of a challenge for those companies that were not born with the digital component embedded in its DNA. Oracle’s Cordero says the Mexican mindset plays an important role in the transformation. “If we do not start changing this mindset, the country will continue facing a lag on its productivity index. We need to make Mexican businesspeople incorporate the innovation chip into their DNA.”

Reluctance to change is something companies sometimes face without being aware of it, adds Elie Haibi, Director General of Hermes Systems. “There are good initiatives in Mexico, but we lack speed and awareness when designing and executing digital projects. Awareness means understanding why the company is carrying out this change and how much this change will impact its mission.”

Cordero believes that for this change to happen, all that is needed is a paradigm shift. “A few years ago, incorporating a digital strategy answered to the need to become more efficient, save money or just follow the trend. Companies now are venturing to the new digital world to find new business models and to offer new products and services.”

However, cultural barriers are only part of the challenge. Mexico does not yet have the appropriate infrastructure that permits the transformation of businesses, according to Cordero. “Telecom companies are now working toward a new generation of 4G where users will be able to have cable-speed connections without being connected to a cable. This will lead to new business models that we cannot even imagine now.”

Although it is driven by companies, digital transformation also must be fomented by the government through public policy. The Telecommunications Reform implemented by Peña Nieto's government is meant to push this transformation. The reform focused on key issues to improve Mexico’s telecommunications reach, recognizing users’ rights to access services such as the internet and broadband, strengthening the regulatory framework to foster competition and take down monopolies and establishing the needed infrastructure to carry out a National Digital Strategy.

According to the OECD, the implementation of the reform has resulted in a number of positive changes, including the entrance of new players in the market, the reduction of telecommunication services prices, increased access to mobile broadband subscriptions and an increase in FDI in the sector.

Opening the door for communication operators such as AT&T and Mobile Virtual Operators (MVOs) has sparked competition in what used to be an immovable market. Ricardo Suárez, Co-founder and CEO of weex, says the appearance of MVOs has been key for fostering competition, regardless of size or financial strength. “Even though we cannot compete directly with big carriers, the fact that the final user can have six or seven options that provide an added value or differentiated services enriches the market.”

Universal access to internet became a pivotal point for the present governmental administration and the country’s digitalization agenda. According to data from the OECD, as of July 2017, Mexico had a total of 74.5 million mobile broadband subscriptions and 16.2 million fixed broadband subscriptions. Although the country has experienced significant growth, it still ranks 33rd in OECD’s ranking of mobile broadband. To address the situation, the government has undertaken the Shared Network project, which aims to broaden the range of telecom services, while offering competitive prices and elevating service quality. Francisco González, Director General of Bancomext, believes the implementation of the Shared Network will allow Mexico to fully enter the Industry 4.0 trend. “We will be the first country to have a shared network that will provide a substantial percentage of the population with access to the 4G network and with enough spectrum to allow communication in a more efficient and economical manner,” he says.

Opportunities offered in the technology sector have attracted international companies to the country, generating hubs in cities like Mexico City and Guadalajara. Juan F. Aguilar, Director General of Dell Mexico, is confident that Mexico will play a key role in the digital transformation of businesses. “Mexico is in a strategic position due to its proximity to one of the largest global markets and the huge support universities are offering in the digital transformation age.” 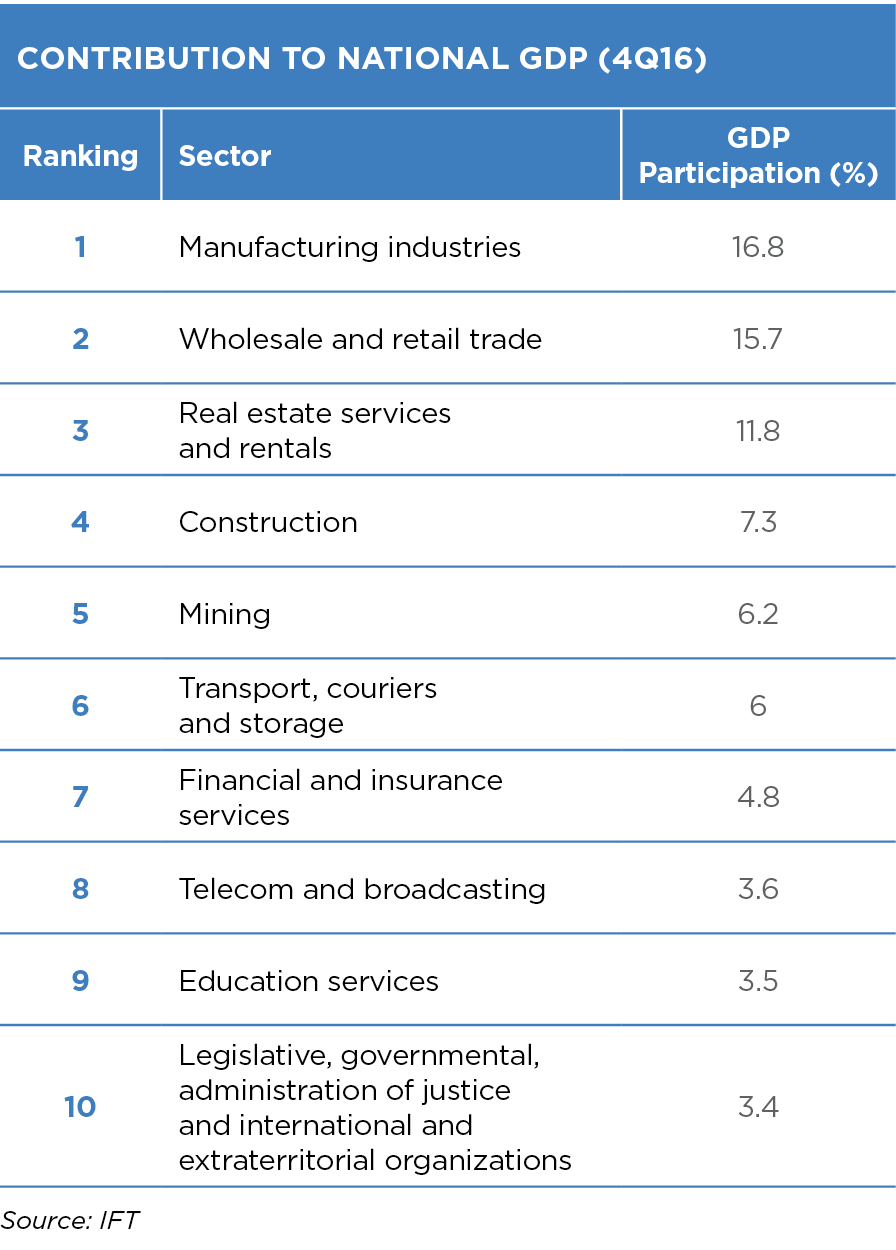