Humans Evolved to Run but Most People Run Incorrectly

I decided to post about running today. By explaining why humans evolved to run, why most modern runners do it improperly and how to improve it, I hope to reduce the number of knee injuries worldwide.

When I read this news article about Pedro Parra, a Rarámuri ultramarathonist who completed a 64-hour race in Chihuahua's Copper Canyon in 2020 while wearing sandals, I took the chance to write about the subject. I noticed a comment on social media saying something like “that’s great, but it’s a shame that our government doesn’t even give them proper shoes to run in.”

How can someone run for so long in that kind of footwear without getting hurt, while many people run in shoes with advanced technology and hurt their knees?

The subject is special to me because I like to run, and I like to do it in sandals.

I was also born in Chihuahua, like the Rarámuri. I have a close relationship with some of them, close enough to be the godfather of Josefa Andrea, daughter of my compadre Francisco and my comadre Martha, who are also from Guachochi, like Pedro, featured in the article.

The Rarámuri are among the world's top long-distance runners. They claim that they run to help the Earth keep spinning. The majority of them do so while wearing sandals made of leather and used car tires. No Nikes. Just the technology inside their feet. They use the features of our bodies to run like we have evolved to do, allowing them to transport themselves across large distances. Why do scientists say humans evolved to run?

We possess features that are unique to animals that run. For instance, our body is supported by extended glute muscles, a small pelvis, short toes, and fluid-filled ear chambers, which contribute to our ability to maintain balance when moving.

For instance, if you watch pigs run, you'll see that their heads bobble up and down. Dogs, horses, and other animals adapted for running have a ligament in their neck that keeps their head still when running. Humans have it too: the nuchal ligament. We also possess a nervous system that produces pain-killing endorphins, which help endure long distances.

The Achilles tendon is another remarkable characteristic. It functions as a link between the calf muscles and the heel bone and as a spring-like mechanism during strides when running.

This is in contrast to gorillas and chimpanzees, which struggle to sprint on two feet as the calf muscles of these animals are directly attached to the heel bone. The arch and this tendon both have a substantial effect on long-distance running.

Humans can also regulate body temperature to avoid overheating thanks to the sweat glands. Well-trained athletes can even outrun a horse over long distances and in hot weather. Overall, we’re very slow compared to other runners in the animal kingdom: Usain Bolt is not faster than a house cat. But in the long run, we’re unbelievably good thanks to this trait.

In his book, The Story of the Human Body, evolutionary biologist and nine-time Boston marathon runner Daniel Liebermann makes the case that many modern diseases are caused by mismatches between the traits of the human body that have evolved over thousands of years of evolution and the lifestyles that exist today. One of these discrepancies is how we run with modern shoes and how we used to run.

Liebermann, known as "The Barefoot Professor," is a devoted barefoot runner. He has also investigated the Rarámuri running technique and the function of running in human evolution. Liebermann highlights how eating meat helped the human brain grow. But it was after the first indications that people were eating meat that sophisticated hunting tools were found. How did they hunt? Approximately 2 million years ago, human ancestors were able to kill animals by "persistence hunting."

Our ancestors used to run after animals for extended periods of time until they overheated. To avoid overheating, most predators don’t hunt during the hottest hours. Humans handle heat thanks to furless bodies and sweat glands. Around noon, while most carnivores slept, our ancestors hunted by persistently chasing prey. Adaptations for endurance allowed them to hunt long before the invention of complex weapons. This style of hunting was also practiced by the Rarámuri not so long ago.

If we evolved to run, why do most people run incorrectly? I’m afraid shoes play a huge part.

Many of us run. It’s simple. One foot after the other, lifting the legs in a continuous rhythm. Yet, I’m sure you know somebody who has said, “I love to run, but my knees hurt after.”

You’ll notice the foot of the person in the left strikes the ground almost flat, with the metatarsus. As a result, the ground impact is absorbed by the arch and transmitted to the Achilles tendon, which then works like a spring. The hamstrings absorb the impact supporting the next stride, our glutes support the position, and the rest of the muscles just lift the legs for this cycle to repeat.

The person on the right, in contrast, is hitting the ground heel first and absorbing the impact with their knee and the heel foam of their shoe. The knee, which is made to be a hinge, plays the role of a shock absorber (ouch).

When we wear shoes with arch support, they impede it from doing its wonderful job. These contemporary shoes effectively remove millions of years of evolution. Running incorrectly also lessens the Achilles tendon's ability to act as a spring, making the person more exhausted. It is understandable why so many people dislike running because they waste so much energy performing it incorrectly.

I don't want to imply that running shoes are evil. However, they allow us to run improperly and make blunders that go unnoticed, which is not possible when barefoot or wearing sandals. Running has been practiced by humans for thousands of years; running shoes have only been invented recently.

There’s a book I highly recommend: Born to Run, by Christopher McDougall. I came to the sandal-running world thanks to a dear friend who’s an avid runner, Humberto Ramos (also from Chihuahua, and also friends with the Raramuri). He suffered knee pains before transitioning to sandals thanks to that book. McDougall suffered similar issues. He loved running but his knees always hurt badly. He was advised against running by medical professionals. He didn't want to accept this. In an effort to disprove this notion, he continued his search and ultimately made contact with the Rarámuri and saw how they could run for hundreds of kilometers without feeling any pain. He noticed their footwear and how that was correlated with their running style. He started running like this and forgot about injuries.

The Rarámuri run "naturally," using their arch, Achilles tendon, and hamstrings as they have evolved to do. As mentioned, they wear sandals made of recycled tires and leather straps. Most of them dislike modern shoes when running. There is a wonderful anecdote of when they traveled to Leadville, Colorado, in 1993 and casually won the challenging 100-mile ultramarathon at an altitude of 3,000m.

Manuel Luna (pictured below, on the right) was a part of the team that participated at Leadville, and Luna Sandals, a brand of running sandals, is named in his honor. I've had the opportunity to run alongside him and one of McDougall's book's subject, Arnuflo Quimare (shown on the left). These photos were taken at a traditional Rarajipari sprint in Urique, Chihuahua. On that day, they ran for 90km nonstop. You’ll notice how they land on their metatarsus and use their Achilles tendon and arch to bounce.

Here's a picture of me with the legendary Manuel Luna after the Caballo Blanco race in Urique Chihuahua. 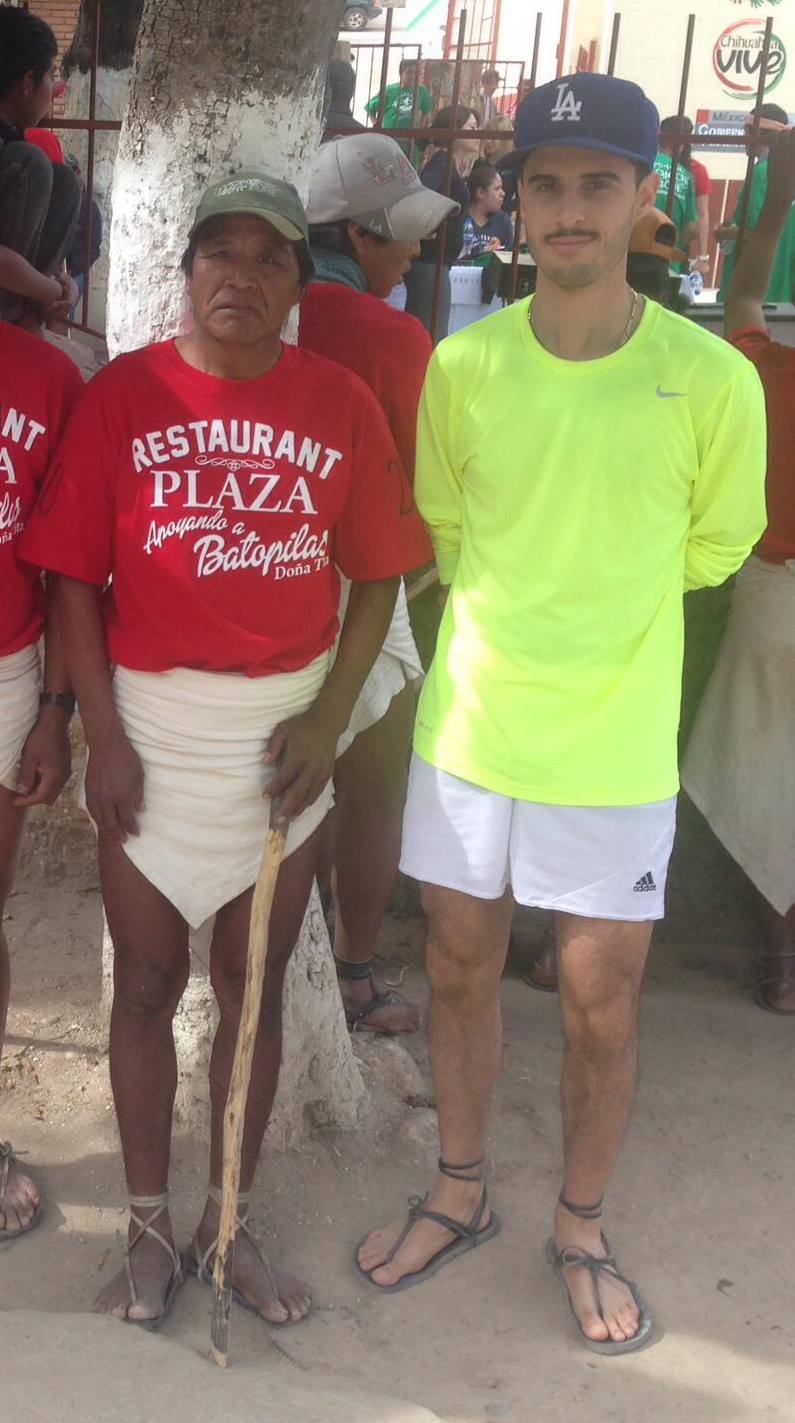 I'm not suggesting that you throw away your running shoes or that you must run barefoot or else you’ll break your knee. It’s OK if you enjoy your shoes. Simply attempt to adopt the "natural" method and land on the metatarsus rather than the heel to make use of the technology already there in your feet. If you do decide to switch to sandals, that’s great! Just do it gradually to avoid injury.

One simple way to improve your technique and avoid injuries is to first take your shoes and socks off, step on some grass or surface that’s hard but not spiky. Lift your feet as if you were running while remaining in position. You'll observe that landing on your heels is not possible.

It’s too painful. Without a doubt, your metatarsal will land first. Step-pace up and down to observe how the Achilles tendon functions like a spring. When you slow it down compared to when you take a quicker stride, you'll notice that it is harder and more tiring.

Try to remember how it feels once you're there, keep your back straight, bury your chin into your chest, tense your abs, and just lean your straight body forward to begin jogging. Do this for some meters (20-100m). Do this for some days. Do it until you really register how the technique feels. You’ll notice it’s more about focusing on lifting your feet off the ground as they land than anything else.

Then, the next time you run, remember this technique and how your feet feel. Imagine you’re barefoot as you run. This running style will help you avoid injuries if you keep it in mind. It worked for me and it has worked for many people. I hope it helps!