Billionaires want to get to the Moon. That often requires landing a contract with one of the most prominent government agencies in the aerospace industry: NASA.

But even for those who already made it to space and back, it does not always turn out as expected. Such is the case for Amazon founder Jeff Bezos, whose space company Blue Origin filed a lawsuit in federal court against NASA on Monday, alleging the agency wrongly awarded a lucrative contract to Elon Musk's SpaceX earlier this year.

The protest filed in the US Court of Federal Claims aims to overturn NASA's decision, reported CNBC. Later, a Blue Origin spokesperson confirmed the filing of the lawsuit and added that the company is seeking to “remedy the flaws in the procurement process found in NASA's Human Landing System.” The company explained the lawsuit seeks to “restore fairness, create competition and ensure a safe return to the Moon for America.”

NASA's decision to award the contract to SpaceX came as a surprise to everyone, as the agency initially said it would choose “up to two companies.” SpaceX was competing with Blue Origin and Alabama-based company Dynetics, but NASA ultimately awarded a contract due to congressional funding of only about a quarter of what was requested to develop the first human lunar lander.

Blue Origin has been outspoken about its plans to travel to the Moon. Last month, Bezos took the first crewed flight of the reusable suborbital space rocket New Shepard, which had previously achieved over 16 successful uncrewed trips.

Prior to the SpaceX contract award in April, NASA had handed out nearly US$1 billion in concept development contracts, of which SpaceX received US$135 million, Dynetics US$253 million and Blue Origin received US$579 million.

Blue Origin's discontent was not limited to the courtroom. On Blue Origin’s website, Bezos' company published an infographic comparing SpaceX's Starship system with Blue Origin's, pointing out “unprecedented number of technologies, developments, and operations that have never been done before for Starship to land on the Moon.” The infographic also notes that Starship would have to fly the Starship “more than 10 times flawlessly” to be able to send astronauts to the Moon. 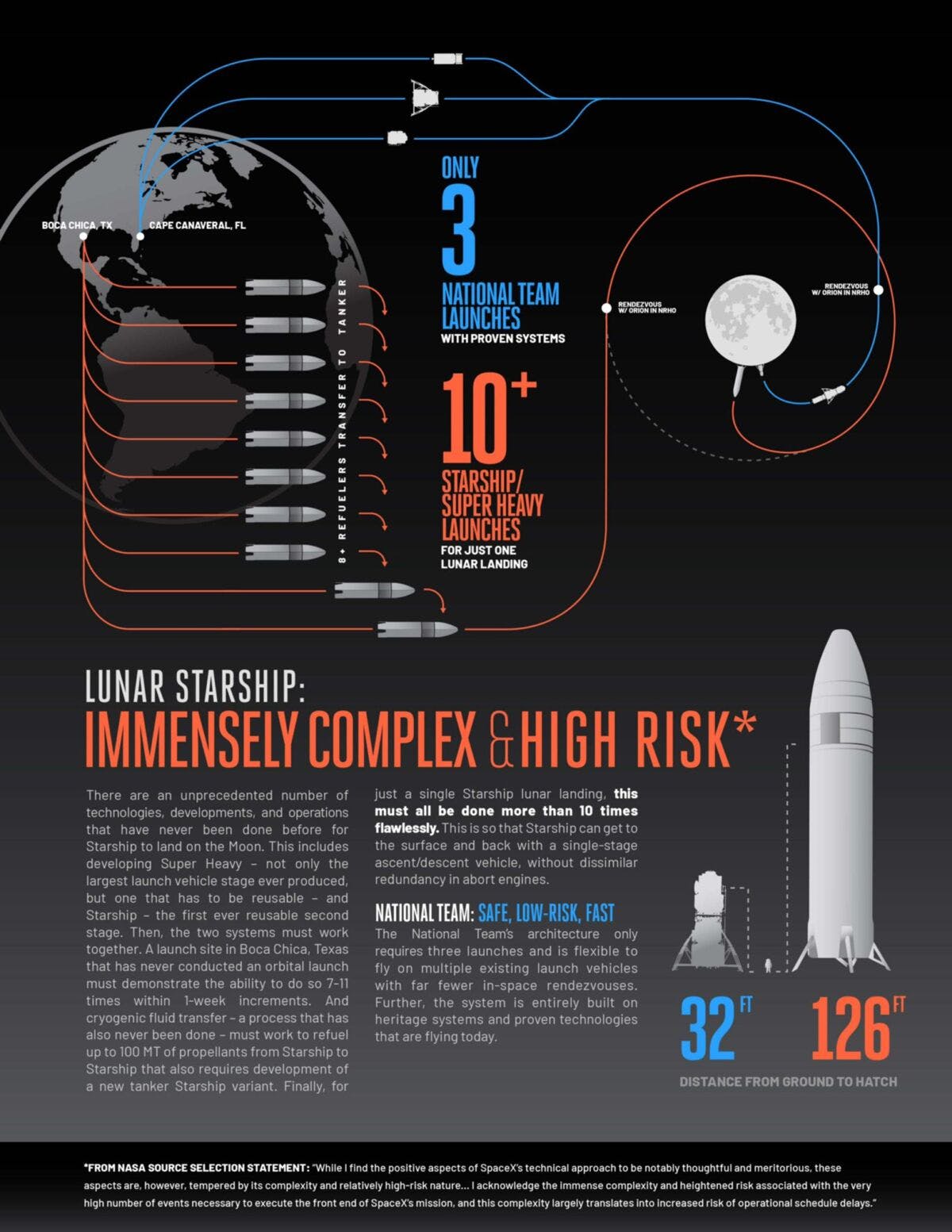 Elon Musk, in response, claimed that SpaceX would only need a “max of 8” launches to accomplish the mission. Tesla's CEO further used the occasion to mock Blue Origin. “The sad thing is that even if Santa Claus suddenly made their hardware real for free, the first thing you’d want to do is cancel it,” he wrote.

In Mexico, Musk had his own struggles with Starlink, the satellite internet constellation operated by SpaceX, facing a legal dispute with StarGroup, which owns the brand name in the country. Musk's company seeks to market its satellite internet under the Starlink name and in 2018 filed a lawsuit with the Mexican Institute of Intellectual Property (IMPI), arguing that the company had not made use of the trademark and that there were inaccuracies in the telecommunications services it offers. However, IMPI denied the request and now it is up to the Specialized Intellectual Property Court of the Federal Court of Administrative Justice (TFJA) to decide who will keep the use of the trademark.