Spotify’s credibility has come into question again. This time, it is about streaming farms. Being among the first numbers on the platform charts is the holy grail for many artists today. The problem comes, however, when other artists do not compete fairly to get there. In recent years, a common practice has increased: the use of bots that artificially increase streaming numbers, known as streaming farms.

The modus operandi of streaming farms is to offer services to artists or record companies to boost their music artificially on platforms like Spotify or Apple Music, playing the same songs or playlists over and over again. According to magazine Rolling Stone, 3 to 4 percent of all streams are faked, equal to US$300 million in lost revenue.

In 2015, Vice was one of the first to report on streaming farms. In 2013, Peter Fillmore, a security consultant, demonstrated automated programs could generate royalties by listening to the same music on a loop. He made around US$1,000 in royalties and reached the top of the Australian charts.

“It was mesmerizing to watch the plays rack up. Unknown albums from minor celebrities I adore suddenly had tens of thousands of hits, when before they had virtually none. With minimal effort, I was generating US$32.26 per day in royalties. Inevitably, my thoughts wandered to greed: how profitable would this music royalty factory be if I turned it on music I owned the rights to?,” said William Bedell, a columnist and engineer who built a botnet to boost records on Spotify as part of an experiment.

This is how he did it: 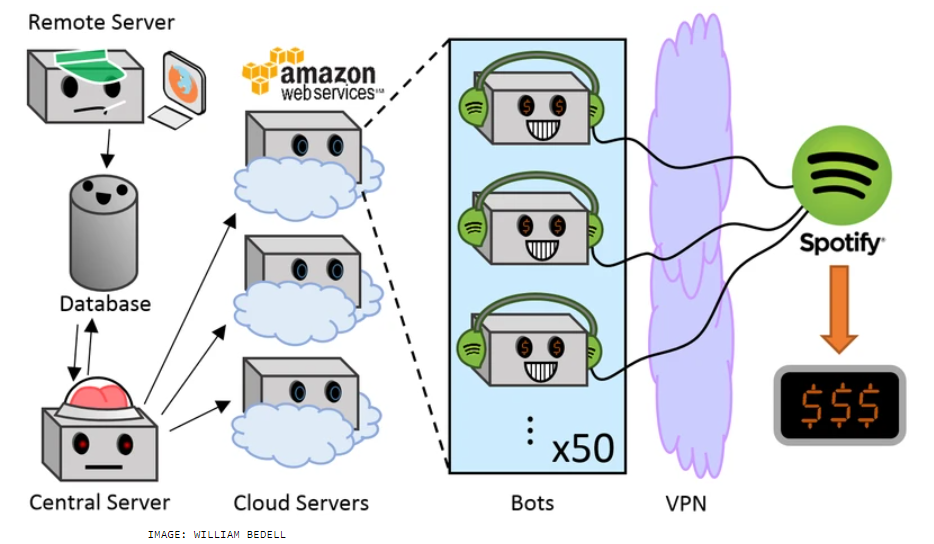 In 2019, Israeli director Itamar Rose launched the documentary 100 million views, where he analyses and explains how videos are made viral on YouTube. In it, one of the software pirates interviewed said in the pop music industry herd behavior is quite relevant. If we notice a song has a hundred million hits, we listen to it instantly. “YouTube sometimes catches fake visits and sometimes not. Fighting too much against fake visits would influence too much the results. Where would YouTube be without the fake visits?” he noted in the film.

The data used in this article was sourced from:
Vice, Rolling Stone
Photo by:   Morning Brew, Unsplash
Tags:
streaming farms
Spotify
Apple music
music industry
100 million views
Share it, if you like it!
Suggest Hashtag