The visions for 2021, 2030 and 2035 in the Middle East are key for understanding some opportunities in the region. This article approaches the visions launched by the countries in the Gulf Cooperation Council (GCC), offering a balance of the most important results achieved along with the opportunities arising for Mexico.

In the Middle East, a well-identified group of countries have introduced a wave of similar initiatives as strategies for developing their economies in the coming years. I am referring to the United Arab Emirates with its vision 2021, Saudi Arabia and Qatar with their vision 2030 and Kuwait with its vision 2035. The visions of these GCC member countries have as a key common aim to move their economies away from the oil sector by achieving domestic economic diversification.

These objectives must be understood in terms of the large oil resources each country owns. Saudi Arabia possesses 18 percent of the world's oil reserves, while the United Arab Emirates and Kuwait each represent 6 percent of the world’s reserves, and Qatar only 2 percent; nevertheless, Qatari natural gas reserves are significant, accounting for 14 percent of worldwide reserves. Despite being a sector with attractive capital flows, it is also a volatile sector. The collapse of world oil prices in 2014 was proof of such volatility, which, together with demographic growth, led these countries to face economic challenges and increased the need for reform plans for economic diversification to prepare for a post-oil future.

Starting with Saudi Arabia's Vision 2030, and focusing only on the economic ambitions, we can identify as key points in its agenda the creation of an environment that enhances business opportunities, the diversification of the economy by investing in sectors that will enable the country’s competitiveness and the creation of more jobs.

The UAE’s vision 2021, aims to make the country an economic, tourism and trade capital, promoting key sectors and boosting high value-adding sectors. With this goal, the UAE seeks a better business environment to increase its global competitiveness and attractiveness.

For Kuwait’s Vision 2035, the objectives are nearly identical to those defined by its regional neighbors; at the core of this is to become a financial and commercial reference, improving the country’s business environment and increasing local productivity. Developing non-oil economic sectors is also among its fundamental pillars. As for Qatar, its Vision 2030, places among its objectives to develop a competitive and diversified national economy ensuring a high standard of living for its population for the present and the future.

In all cases, the private sector is seen as an important driver in achieving competitiveness, development, and diversification in this group of countries.

As the target date for achieving their visions gets closer, it is interesting to analyze some indicators that show up-to-date progress of the reform initiative programs, follow-up on which offers an interesting scenario for Mexican businessmen interested in exploring the regional markets. 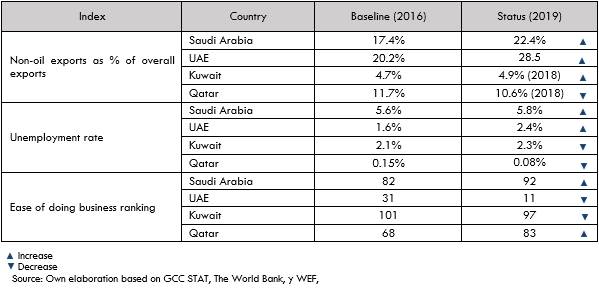 Diversifying the economy in these countries has been a dynamic process. On one hand, we see Saudi Arabia and the United Arab Emirates with great progress in their non-oil production, with 28.7 percent and 11.8 percent growth rates, while in Kuwait there was a 4.2 percent growth rate. Qatar continues to implement diversification strategies in the face of the challenges of recent years.

It is interesting to highlight that in the Saudi and Emirati markets, the activities of the petrochemical industry, iron and steel manufacturing, electrical appliances production and the aerospace industry played a key role in the diversification efforts. To boost these sectors, the countries have launched a broad portfolio of construction and infrastructure projects as simultaneous strategies. It is worth noting at this point that this scheme to stimulate domestic production continues to provide an opportunity for imports of a wide variety of supplies, resulting in great opportunities to make inroads into these markets.

Looking at the unemployment rate and the friendly, productive environment for its population, we find Qatar’s stocks to be among the best performers in recent years. The low unemployment rate has contributed to the expatriate migration to the country, making it a cosmopolitan country. The presence of diversity at the population level in the markets of these countries allows the demand for many products in the food and beverage sector. Thus, besides this major step toward the goals of their vision with a healthy job environment, it opens an opportunity for other countries to enter the market, as food security is still an area of dependence overseas.

Meanwhile, the United Arab Emirates is notable for its progress in ease of doing business, placing it in 11th position and making the country a global and regional reference. The UAE government’s moves to improve legislation, procedures, the cost and time of doing business, and its visa flexibility have been an important step toward its 2021 vision, leading to greater private sector performance, attracting foreign investors and creating more jobs.

The other countries analyzed continue to launch initiatives to position themselves as business hubs. It is worth mentioning the government incentives in Saudi Arabia to encourage international companies to establish their regional headquarters in the Saudi capital of Riyadh. In Qatar, the financial technology development with the Qatar Fintech Hub project to attract international digital companies to the capital to launch in the global market, and in Kuwait the exemptions initiatives in fees and custom tax on trade activities.

With just under a year to go to achieve the goals set by the United Arab Emirates, its progress in diversification and its position as a trade and business hub stands out at the regional level. Saudi Arabia, Kuwait and Qatar have taken significant steps forward and continue with major initiatives and projects ongoing.

Undoubtedly, the overview of the different initiatives in the GCC countries opens an important window of opportunity for Mexican entrepreneurs interested in the region’s market. We are facing governments that are investing an enormous amount of effort and resources to achieve their goals. Mexico has to look at the healthy business environment that the Arab countries are moving toward, offering opportunities not only for their own economies but for business with international companies that can take advantage of the sectorial complementarity facing these new emerging trends