When it comes to water, the common refrain across the country is simple, don’t drink it. This is good advice yet the deeper issue may be rooted in a lack of infrastructure and a dwindling resource that leaves many without proper access to the resource. As the government battles to fix a dilemma that affects everyone, it believes the private sector may hold the answer. In response to Mexico’s leaky water system, the government has introduced constitutional reforms with the approved 2015 General Water Act, which seeks to promote the participation of the private sector in water management services. The general public, wary that this means privatization, higher prices and adverse impacts on communities, has not welcomed the plan. But the financial resources that private companies can grant might be the extra boost the country’s punctured infrastructure needs, as long as it is coupled with proper regulation and follow-up to guarantee access and viability.

The regulatory changes are significant considering the released economic package for 2017 will have a much smaller budget than expected at the beginning of President Enrique Peña Nieto’s administration in 2012. “CONAGUA was one of the federal entities most affected by the public budget adjustment and this has seriously affected the amount of investment in the country’s hydraulic infrastructure,” says Emilio Soler, Director of Latin America at Aqualia. The Water Commission estimates that infrastructure projects require around MX$306 billion (US$16.1 billion) to sustainably meet the country’s water demand by 2030, a steep mountain to climb considering the weaker economic landscape. The Bank of Mexico in late August lowered its growth outlook for 2016 to between 1.7 and 2.5 percent from 2-3 percent, which would be the lowest in decades.

Either way, something must be done soon as the water supply could be running out, says Jeremy Josephs, a contributor to Water and Wastewater International. He believes Mexico City’s pipe system loses 11 cubic meters of water per second to leaks. The metropolis is also unsustainable as it extracts “water from its aquifers at a rate that is more than twice as fast as they are replenished,” he says. “A wholesale review of the city’s approach to water management is required – and fast.”

The World Bank says 95 percent of the Mexican population has access to an improved water source, which are structures that adequately protect water suppliers such as piped water, protected springs and rainwater from outside contamination. By comparison, Latin America and the Caribbean have an average 91 percent. In sanitation, 81 percent of Mexico’s population has access to improved facilities, such as toilets, a piped sewer system, septic tanks and latrines. But data from the National Water Program for 2014-2019 tells a slightly different story. Of 34 states surveyed, 13 were classified as having deficient global access to basic water services. Guerrero, Oaxaca and Chiapas notched the lowest scores while Aguascalientes and Mexico City were out front with “adequate” services.

Ramón Aguirre, Director General of Mexico City Water Systems (SACMEX), says the country’s consumption levels are 50 percent above the average rate of European and Latin American cities. “Bogota satisfies its demand with 29m3 every two months per household, while Mexico City uses 32m3,” he says. “The water supply system will slowly start to deteriorate if we cannot lower consumption.” Considering the data, it is no surprise the Guardian newspaper has labeled Mexico City the biggest consumer of water in the world.

The context of Mexico’s water system also has a secondary impact. Not only is the country one of the largest consumers of bottled water in the world, research from UNAM showed Mexico City ranks first in the world for gastrointestinal infections from water consumption, mostly due to pipe leaks that permit the entrance of deadly bacteria. “The administration of water resources falls on the shoulders of each municipality in Mexico,” says Santiago Ortiz, Director General of GBM Infraestructura. “Often, these municipalities lack the necessary economic or technical resources to manage these systems efficiently.” To address the problem, the government has decided to tap into private sector expertise, a move that does not sit well with the country’s population.

In March 2015, waves rippled across the nation with the approval of the constitutional reforms that included the amendment of the National Water Act. The amendments established the responsibilities between CONAGUA and the Basin Agencies, organizations that manage the country’s groundwater. Combined with the 38 initiatives and 32 programs of the 2030 Water Agenda, the result is a national effort to reduce the country’s water shortage. The mission of the National Water Act is to improve Mexico’s drainage system, provide for clean sources of freshwater and protect the nation from natural disasters and floods.

CONAGUA has a special interest in promoting the participation of the private sector in municipalities that have over 50,000 inhabitants as it believes these areas would benefit the most from the participation of the private sector, as mentioned in its guide to PPPs. The focus on larger municipalities has caught the eye of environmental and human rights organizations that worry the new projects will ignore smaller, more impoverished communities. The Mexican Center for Environmental Rights (CEMDA) says almost 9 million people in Mexico lack access to potable water and of this number, 5 million are in rural areas. The biggest challenge the government faces on its path toward closing the water availability breach and in complying with its promises on water infrastructure improvements is finding the financial resources and obtaining community approval. This is where the controversial PPPs can help bridge the gap between projects and investment.

Considering the government had to create deep changes in Mexico’s system, many fear that the National Water Act implies the complete privatization of the country’s water. CONAGUA created a guideline for the private sector’s participation in water and sanitation facilities that explains the details of the mechanism. It clarifies the distinction between privatization and private participation. The former implies the sale of assets and the latter involves collaboration with the public sector to provide services in water and sanitation that are based on agreements and set time periods. The Water Commission allows private participation specifically through service delivery contracts and concessions. Privatization is allowed in the mechanism as a type of concession through the sale of assets but it is one of several types of participation the authorities permit.

The inclusion of the private sector is highly misunderstood by the general public as seen by protests and a declaration from an group of civil society organizations that are concerned about the impact of the National Water Act. The Wharton Business School of the University of Pennsylvania has added its voice, saying that as long as private participation is coupled with a commitment from the authorities to regulate outcomes, assure accessibility and viability and promote the inclusion of surrounding communities, advances can be made.

Not surprisingly, such investments benefit the bottom lines of private companies. The WHO estimated in 2012 that investment return rates around the world for sanitation facilities stood at US$5.5 per dollar invested. For potable water it was US$2 per dollar. The Wharton Business School of the University of Pennsylvania suggests reducing legislative barriers to continue attracting private investors, the promotion of projects that go above and beyond to improve the efficiency of services in the community and the country, and lastly, the inclusion of affected neighborhoods and indigenous groups to assuage their fears of being shortchanged. A cultural transformation could be emphasized as well to avoid an irreversible water scarcity conflict and create an ecological consciousness among new generations. Most importantly, authorities could ensure the improvements created by PPPs improve water availability not just for the wealthy but also for communities. A positive relationship between the private and public sector and social spheres are the key to facing Mexico’s white elephant. 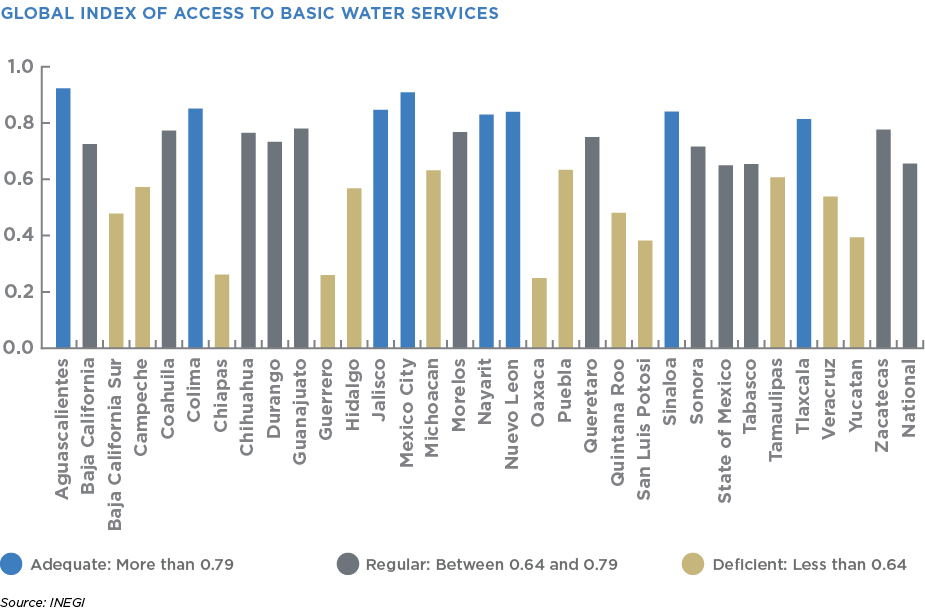