The Case for Gold, and Gold Miners

At a time of unprecedented monetary expansion and inevitable currency debasement, it is surprising to note that gold miners, despite their very high margins and cash flows, happen to trade at all-time low valuations, and in many cases, all-time low share prices. The investment case becomes even more compelling when one considers that the world is running out of gold reserves, which means that miners with attractive assets are more valuable than ever. Indeed, Coast Capital believes that gold miners present the most attractive opportunity set for investors, whether they follow a macro, deep-value, event-driven, momentum, or specialist investment philosophy. Whether the price of gold goes up or down, small and midtier miners are extraordinarily well poised to deliver returns for investors.

Demand for gold is at an all-time high and increasing, driven by growing middle classes in countries such as China and India and central banks in emerging markets. The latter hold only 5 percent of their reserves in gold, compared with 15 percent or more for their Western counterparts. As emerging market central banks catch up with their Western counterparts, they could account for the entirety of the world’s gold production for the next 20 years.

Given the explosion in monetary supply, investors have become larger buyers of gold, as can been seen through the record ETF inflows in 2020.  It has become clear that the nearly $20 trillion in global negative yielding debt has removed the barrier to entry, or opportunity cost of holding gold as investors look to rethink and rebalance a typical 60/40 portfolio. 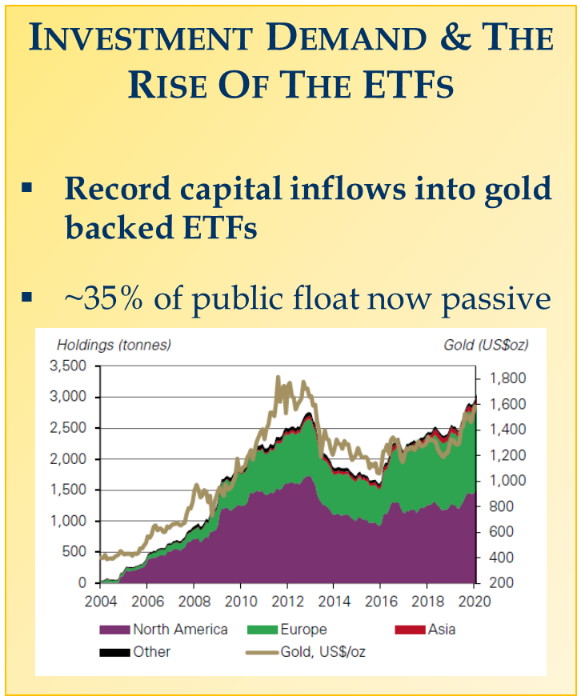 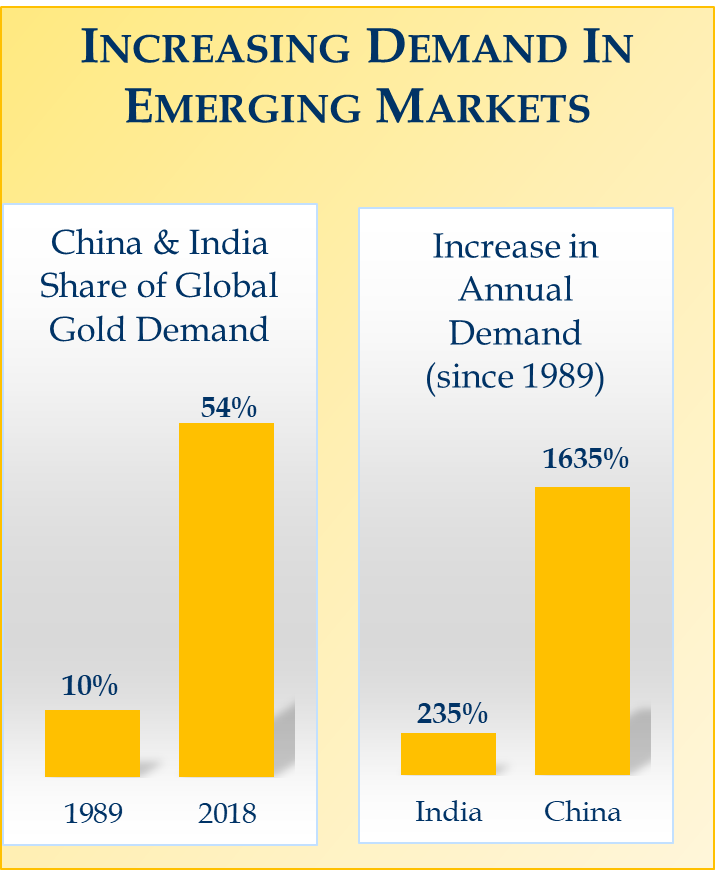 Supply of gold, on the other hand, is declining, due to dwindling new discoveries. While the pace of exploration has increased 200 percent over the past 20 years, the amount of gold discovered has declined by 95 percent and the quality of the gold discovered is often exceptionally low. This means that for the first time in history, we have entered a period of ad-infinitum declining production – 10 years from now, the world will produce 50 percent less gold than it does today. Even if we made notable new discoveries, it can take 15-plus years from discovery to production.

The unprecedented demand/supply imbalance and the declining production beginning in 2020 are accentuated by the explosion in monetary supply, which inevitably leads to higher gold prices over time. In the financial crash of 2008-2009, the US Treasury minted $1.5 trillion new dollars, which led to a near tripling in the price of gold within three years. Note that yearly gold production was increasing 12 years ago, and central banks had not joined the ranks of gold buyers. This time around, the US Treasury has already expanded our money supply by over $3 trillion since March 2020 – more than twice as much as in the prior recession. Like a bucket of water that has been placed on high heat, we expect the price of real assets that are in finite quantity, like gold, to heat up in the coming years. Meanwhile, we are likely to see another $1.5 to $3 trillion increase in money supply in the coming months. This has breathtakingly positive implications for the price of gold, and gold miners.

The Case for Gold Miners

Coast Capital’s focus on gold miners is not at all driven by the generationally powerful macro backdrop. Indeed, we believe that our investments in the space are well placed to perform, whether the price of gold increases or declines from current levels. This is due to several oddities about gold miners, which are among the least invested companies in the world.

Gold mining is the most profitable industry in the world and began the year with 20 percent operating margins. Since then, margins have more than doubled, due to an increase in the price of gold as well as a decline in production costs, which consist mainly of energy, raw materials, and labor in local currency. The average gold miner is currently four times as profitable as the average S&P company, yet it only has 1/3 the valuation. Coast Capital believes that there is no more attractive industry to invest into.

The paradox of low valuations (and in many cases, all-time low share prices) and all-time high margins is a symptom of the lack of capital invested in the sector. There are very few active investors in the gold mining industry, which can be an extremely complicated industry to invest into. Indeed, Thomas Edison once remarked that people fail to recognize opportunity because it goes around dressed like hard work. Doubly so for gold miners. Investors in the space need to have a detailed understanding of geology, mine engineering, jurisdiction risk, and general management in order to consistently identify great companies in the space. Most investors lazily allocate capital through ETFs, which are heavily overweight the largest miners in the sector. As a result, the largest miners trade at twice the valuations of their smaller peers, even as the same major miners face declining reserves and production rates.

Coast Capital, in contrast, has assembled a first-class team with a distinguished track record of performance as some of the industry’s leading geologists, mine engineers, and CEOs. These individuals help Coast Capital to identify and operationally due diligence the most attractive investment opportunities in the space (in many cases through direct investments). We are particularly focused on companies with attractive assets, as we believe that the industry has entered a transformative period of consolidation, during which the major miners purchase the small and midtier miners in order to maintain production rates. We expect to continue to be rewarded for investing in the extraordinarily under-valued, increasingly scarce, and hyper-profitable gold miners, and are well-placed as event-driven investors to drive consolidation and value creation. Our investment process is designed to generate returns regardless of the price of gold. Indeed, our diversified gold investments appreciated by more than 41 percent in 2019, and by 200 percent YTD (as of October 2020). The Midas Fund, which we launched in September 2020, appreciated by 14 percent in its first two months, during which the price of gold declined by 5 percent. Currently, we are buying into companies at 1.5 times cash flows!

Finance
Bitcoin Is an Ecological Disaster That Happens To Be Worth … Zero
Mining
The Case for Gold, and Gold Miners