More and more, the international mining community is starting to pay attention to Mexico as an important gold producer. Though it was gold that originally brought the Spanish colonizers to Latin America in the 15th century, it is silver that has been the protagonist in Mexico’s mining history, with gold being produced in much lower quantities and generally as a by-product of other mining operations. However, times are now changing and Mexico is emerging as a major gold producer in its own right. Between 2008 and 2011 the level of gold production in Mexico increased by 55%. The dramatic increase in gold production continued again in 2012, with production 15.96% higher than it had been in 2011. This represents a faster growth rate than overall mining production in Mexico, which grew at a rate of 12% in the same year.

This increase comes in large part as a result of the sustained upwards trend in metal prices, which saw the price of gold reach US$1,688 at the beginning of 2013 before it declined to US$1,320 by September. It is also the natural result of the favorable conditions for gold mining that exist in Mexico, which combines good gold deposits, favorable conditions for the preferred extraction technique of heap leaching, and a historical and stable mining culture.

The rise of Mexico as a destination for gold mining comes at a time when modern technology is improving the options available to mining companies for the exploitation of lower grade deposits at affordable prices, and this is something that a number of mining giants are doing successfully in Mexico today. One of the great appeals of gold mining in Mexico is the amenability of its gold deposits to heap leaching techniques. In fact, nine of the top 10 producing gold mines in Mexico use heap leaching techniques in their production processes. Heap leaching is a hydrometallurgical process that is used mainly on lowgrade deposits to separate the ore from the accessory minerals. The technique is relatively new, but generally favored because it is one of the most economical production methods in gold mining operations. “In Canada, due to the formation of the deposits and the environment there are not too many possibilities for heap leaching. The deposits in Mexico are much more likely to be oxidized, making heap leaching processes more probable,” says Tom Burkhart, Vice President of Exploration at Argonaut Gold.

According to Camimex, 102.8 tonnes of gold were extracted in Mexico in 2012, with the states that produced the majority of that gold being Sonora (29%), Zacatecas (21.1%) and Chihuahua (19.2%). The Sonora Gold Belt is currently the leading gold producing region, however the Guerrero Gold Belt is also emerging as a major contributor to Mexico’s gold production, with over 21 million ounces of known gold resources, and only an estimated 0.5% of the state’s land having been explored. Mexico’s first and second gold producing mines, Peñasquito in Zacatecas and Los Filos in Guerrero, both belong to Goldcorp, positioning the company as Mexico’s biggest gold producer, accounting for 26% of gold production in the country in 2012. With large gold mines such as Chesapeake Gold’s Metates in Durango and Goldcorp’s Camino Rojo in Zacatecas currently in development, which between them have over 20 million ounces of proven and probable gold resources, gold production in Mexico is on course to continue growing in the coming years. “In the last two years the production of gold in Mexico has increased by more than 4.1 million ounces The country will remain the number one producer of silver, but will also become an even more important player in the gold market,” says Rafael Alexandri Rionda, former Director General of the Mexican Geological Survey (SGM). 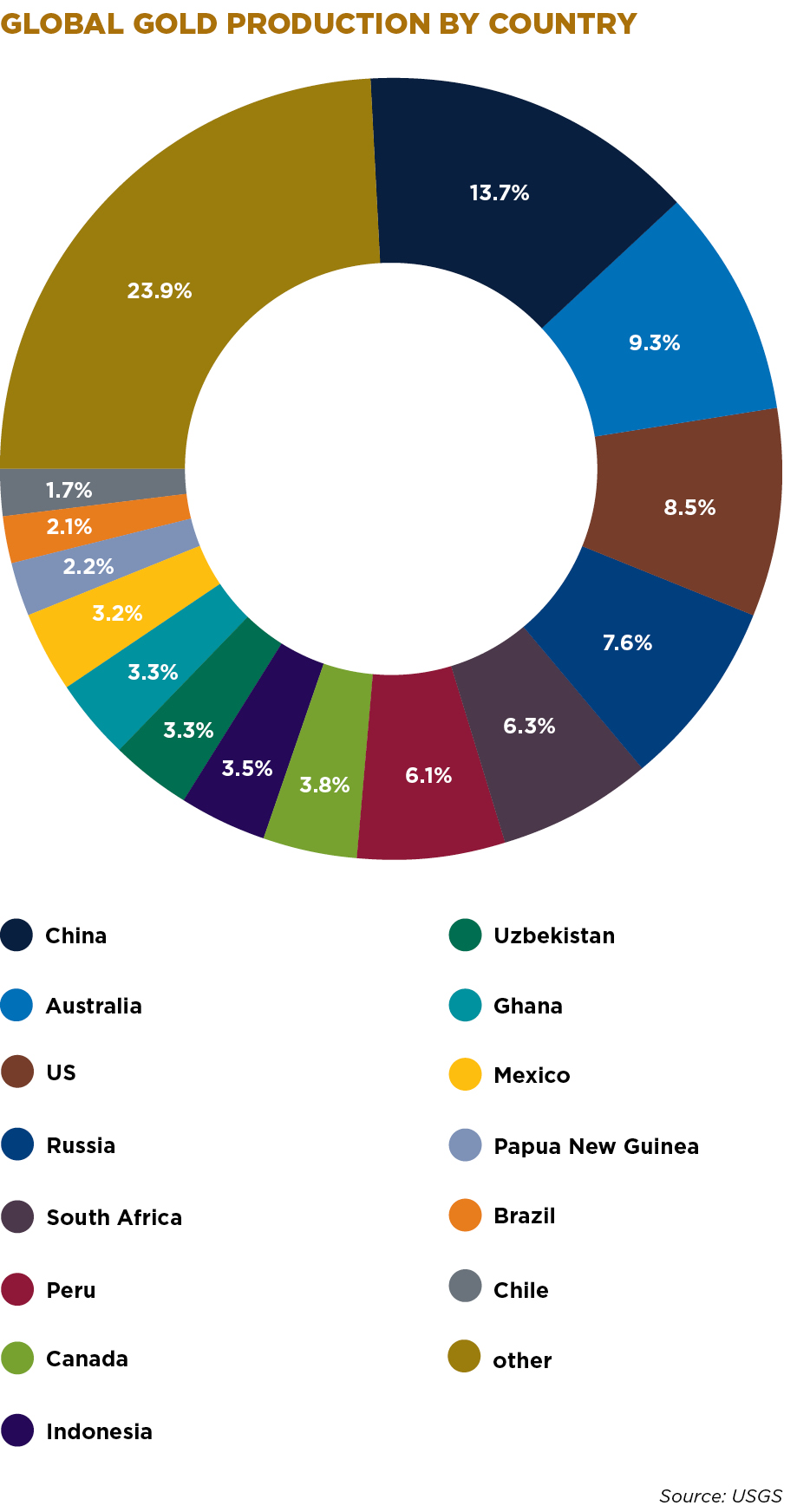