Mexico’s oil production reached 98.9% of the annual target for 2013, falling short of the target by 27,900b/d. Average crude oil production reached 2.522 million b/d, a drop of 25,800b/d over the previous year. This 1% reduction was mainly the result of an increase in the fractional flow of water and decreased production at Litoral de Tabasco, Cantarell, and Samaria-Luna. This was not fully offset by the production increases coming from the development and operational startup of new fields. Heavy-oil production amounted to 1.365 million b/d, a 1.4% decrease from 2012. This was mainly due to a fall in production at the Akal field in Cantarell, which produced around 30,900b/d less than in 2012, and a 19,700b/d production decrease at the Ku field at Ku-Maloob-Zaap. Overall, 54.1% of Mexico’s produced crude was heavy-oil. Light crude oil production averaged 847,100b/d, a 1.6% increase over the previous year. This was mainly due to new production coming from the Kuil field in Abkatún-Pol-Chuc, which yielded nearly 42,200b/d more than in 2012. Light oil’s share in the country’s total crude production was 33.6%. Superlight oil production reached 310,000b/d, which was a 5.7% drop from 2012. This type of oil represented 12.3% of Mexico’s total production. These were the result of a decrease in superlight crude production in the Sen and Pijije fields of Samaria-Luna, which recorded production decreases of 21,600b/d and 18,200b/d respectively. The Tsimin field in Litoral de Tabasco saw an increase in production by 21,200b/d compared to 2012. 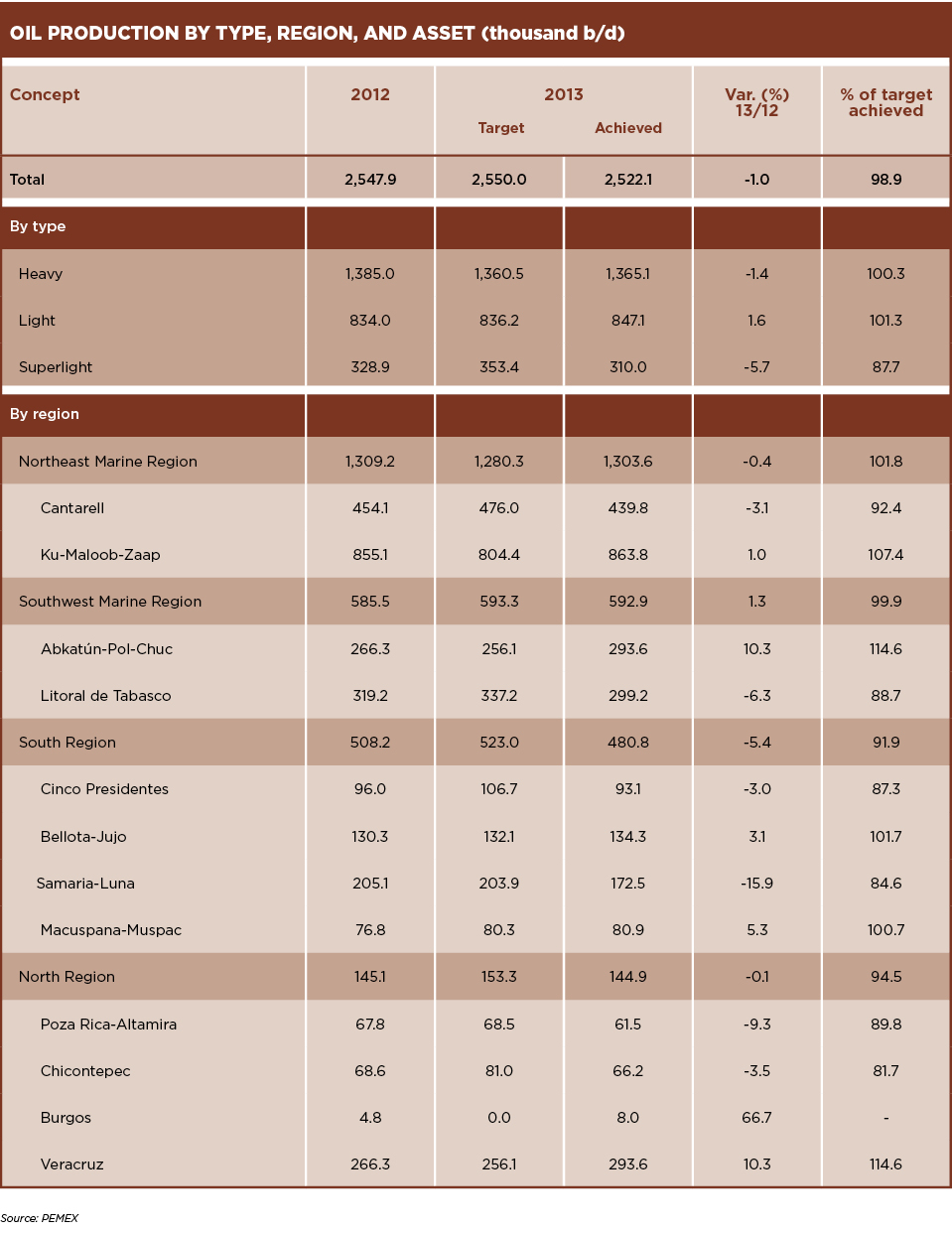 Production in this region reached 1.304 million b/d in 2013, a 0.4% decrease when compared to 2012. This was the result of lower production at Cantarell. However, the annual target for the region was exceeded by 1.8%, mainly due to Ku-Maloob-Zaap surpassing its target by 7.4% due to an increased baseline production and additional outputs coming from better well maintenance procedures.

Crude oil extraction in the region reached 592,200b/d, a 1.3% increase from 2012. This represented 99.9% of the annual target, finishing the year just 400b/d below the established program. This variation was induced by the increase of fractional flow of water, less baseline production than expected, and less overall production due to the completion of several wells in the Crudo Ligero Marino and Yaxché projects of Litoral de Tabasco.

In 2013, around 480,800b/d were produced in the region – 5.4% less than in 2012, mainly due to the natural production decline and increase of the fractional flow of water in fields of the Delta de Grijalva project in Samaria-Luna. The region fell short 8.1% of its annual targets due to less production coming from the Ogarrio-Sánchez Magallanes project in Cinco Presidentes.

Production in the region averaged around 144,900b/d of crude oil, which represented a 0.1% decrease in comparison to 2012. This was induced by the natural decline of production in Poza Rica-Altamira which had a negative impact of 6,300b/d relative to the 2012 figures. The region’s production fell 5.5% short of its annual targets, mainly due to a decrease in production as a result of fewer well completions than initially planned in Chicontepec. 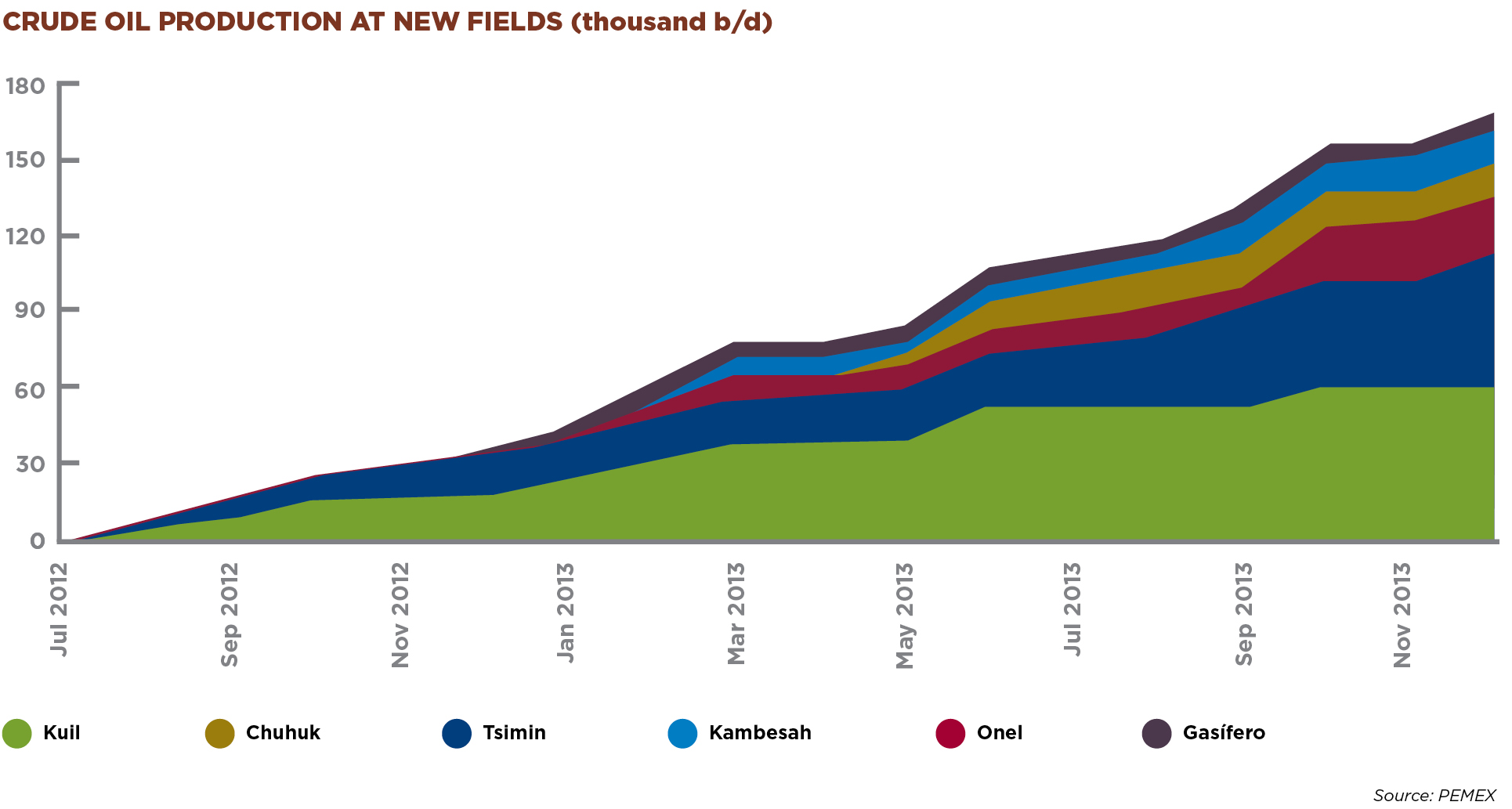