Since the oil price drop, exploration and drilling activity was the first area to suffer as PEMEX reduced its exploration activity. After a modest oil price recovery and with the entry of new players, all signs indicate the beginning of a drilling upturn.

During 2016 PEMEX added 684 million barrels of crude oil equivalent in 3P reserves through exploratory activity, 5 percent more than the 651 million barrels it added in 2015 but leaving the reserves replacement rate at no more than 62 percent.

Three of PEMEX’s six successful exploratory wells that were completed in 2016 were located in shallow waters. Two others were in ultra-deepwaters and one was found in deepwater.

At the beginning of 2017, two more shallow-water exploratory wells were completed by PEMEX, as well as Eni’s Amoca-2 well in late March 2017. This made the Italian oil Major the first IOC in Mexico to strike oil since the Energy Reform was passed.

The three commercially productive shallow-water exploratory wells PEMEX completed in 2016 were the Pokche-1, Uchbal-1 and Teca-1 wells. The Pokche-1 well, off the coast of Tabasco, reached total depths of 6,518m and produced superlight oil and gas. Uchbal-1 was 2,670m deep and produced heavy crude and gas.

Light crude was discovered in the Teca 1 well, located 30km offshore between Veracruz and Tabasco, and with a water depth of 44m. Its 3P reserves are estimated to lie between 50 and 60 million. It reaches depths between 2,750m and 3,400m and could produce around 7,000b/d.

In the first quarter of 2017, PEMEX made two shallowwater discoveries with the completion of the Teekit 1001 and Koban 1 wells. Both were drilled in PEMEX’s Litoral de Tabasco asset in a water depth of 30m and 12m respectively. Teekit 1001 contains oil and gas and has an initial production of 2,472b/d, while Koban 1 contains gas and condensates and initially produced 3,276b/d.

PEMEX’s 2016 exploration successes in deepwater are the Nobilis-1, Doctus-1 and Exploratus-1DL wells; the latter two of which are in ultra-deepwaters. The Nobilis-1 and Doctus-1 wells contain over 300 million barrels of crude oil equivalent and contain light crude oil. The Nobilis field is to be farmed out together with Maximino in PEMEX’s second deepwater farm-out following 2016’s success, when BHP Billiton entered into a joint venture with PEMEX for the Trion field. Nobilis-1, located around 220km from the coast of Tamaulipas, was drilled in a water depth of 3,000m and a total depth of 6,115m. The drilling resulted in the discovery of two crude oil deposits, with a gravity of over 40 API. According to PEMEX, the well’s productive capacity could reach 15,000b/d and contains an estimated 140 to 160 million barrels of 3P reserves.

PEMEX defines its base reserve incorporation goal as 1.1 billion boe at 3P level from 2017 to 2021. CNH Commissioner Alma America Porres believes this is an ambitious goal. “This scenario that assumes that PEMEX will incorporate over 1 billion barrels of oil equivalent, based on the fields and areas assigned to PEMEX during Round One, is optimistic and will need strong support from farm-outs,” she says, adding that based on the first four months of 2017, PEMEX is not on track to achieve it. 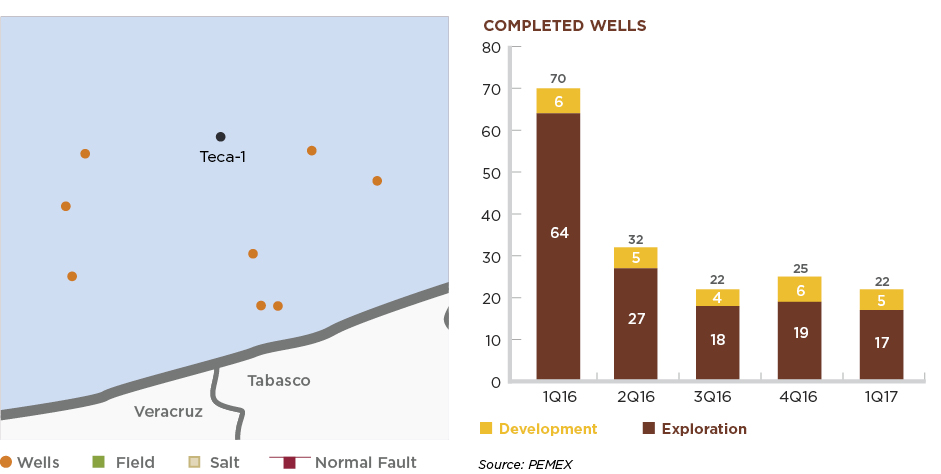 The company plans to drill 30 exploratory wells in 2017, a goal that if reached will result in a total 1 billion boe, in line with the “improved scenario” outlined in PEMEX’s business plan, according to Director of Exploration José Escalera. “With prices of around US$43/b for the Mexican mix, it is a challenge but we know that we can make a go of it,” he says. Short-term exploratory success depends on the NOC’s ability to take advantage of its Round Zero assignments, while new areas won through licensing rounds will help mid to long-term exploration success, Escalera says.

This was due to less activity than planned in the Poza Rica-Altamira, Acete Terciario del Golfo, Cinco Presidentes, Samaria-Luna and Litoral de Tabasco assets, which PEMEX attributes to the budget adjustments made at the beginning of 2016.

There also was a sharp drop in active drilling units after the first quarter of 2016, when the 41 active rigs almost halved, falling to 23 for 2Q16 then reducing quarterly by one for the rest of the year, and again for the first quarter of 2017. This was wholly due to a decrease in development rigs rather than exploratory ones, which actually increased from 1Q16 to 2Q16. The average number of active development rigs for each quarter of 2016 was 19.25, 70 percent less than the quarterly average of 64.75 in 2015.

PEMEX plans to drill 30 exploratory wells in 2017. Ten will be onshore, 12 will be in shallow waters, four will be in deepwater and the remaining four will be drilled in unconventional fields. 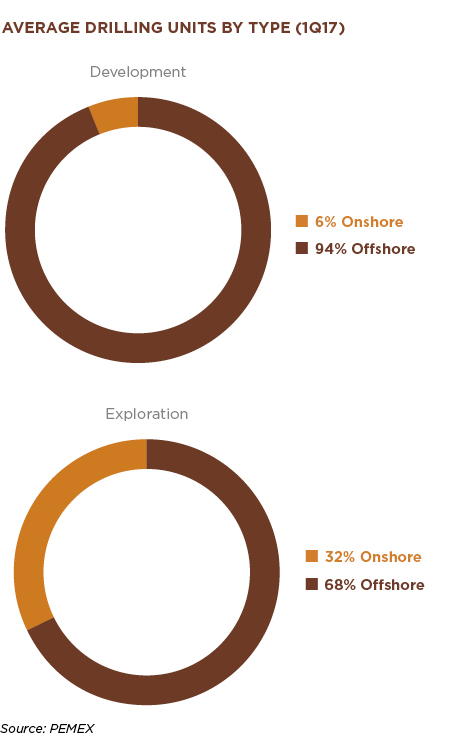