Light-vehicle production in Mexico is set to end 2021 in its lowest level since 2012, following five contractions during the year. JAC’s Hidalgo plant, for example, only manufactured 12 vehicles during November. Meanwhile, the Mexican Ministry of Economy is considering actions against the US if it passes the EV incentives bill.

Mexican vehicle production has not recovered and continues suffering amid the COVID-19 pandemic, global supply chain bottlenecks and semiconductor shortages. For the first time in the year, production accumulated negative figures. With 2.77 million units produced before Dec. 2021, this is set to become the industry’s worst year since 2012.

Production of most light-vehicle OEMs shrank in November. JAC only manufactured 12 vehicles during the last month, a 96.5 percent contraction when compared with October. Mercedes-Benz and General Motors production figures shrank by 69.2 percent and 43.7 percent, respectively.

Mexico Threatens US With Tariffs Over EV Incentives

The Mexican Ministry of Economy is prepared to commercially retaliate against the US if the country passes the fiscal incentives for the purchase of electric vehicles (EV) proposed under US President Joe Biden’s “Build Back Better Act.”

President Andrés Manuel López Obrador announced that “chocolate cars,” those imported illegally into the country, will be also legalized in Michoacan. This measure will only apply to vehicles that entered the country before Dec. 31, 2021.

Volkswagen announced its entrance into three strategic partnerships to strengthen its position in the field of electric batteries. The US$34 billion push by Volkswagen aims to close its gap in the EV competition with Tesla. Volkswagen’s new partners are the material technology group Umicore, the battery specialist 24M Technologies and cleantech company Vulcan Energy Resources.

To observe the International Day of Persons with Disabilities, General Motors Mexico strengthened its corporate efforts to become the world’s most inclusive company by offering employment opportunities to differently-abled individuals.

The two firms are testing 20 robotaxi cars in Shanghai to evaluate their viability for commercial use. The trial is set to expand to a second Chinese city next year, said Momenta. The vehicles are based on SAIC’s Marvel R electric SUV and can be ordered through the homepage of the new version of the SAIC Mobility App, as long as users are within the permitted range of the autonomous driving route. 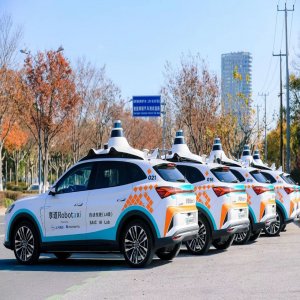