Mexico, a Paradise for Cryptocurrencies

In March 2018, Mexico became one of the first countries to draft a Fintech Law aimed at regulating all financial activities related to new technologies, including cryptocurrency, which experienced exponential growth practically all over the world. However, Banxico indicated that it would only guarantee operations with this type of currency for internal use by already-regulated financial institutions. This legal loophole did not prevent Mexico from becoming, as Statista has pointed out in his last report, the sixth country in the world with the highest adoption level of this type of currency. According to the German statistics company, 12 percent of the Mexican population admitted having used these currencies at least once in their lives.

Mexico’s data joins that from countries in Latin America, the region where this type of payment tool has grown the most worldwide. Of the six countries that lead Statista's ranking, four (Brazil, Colombia, Argentina and Mexico) are Latin American. Turkey tops the list, with 20 percent adoption, followed by Brazil (18 percent), Colombia (18 percent), Argentina (16 percent), South Africa (16 percent) and Mexico (12 percent). The ranking also shows that the use of cryptocurrencies has been more widespread in emerging economies, while more developed countries such as Australia, UK, US, France, Germany and Japan appear at the bottom of the ranking. 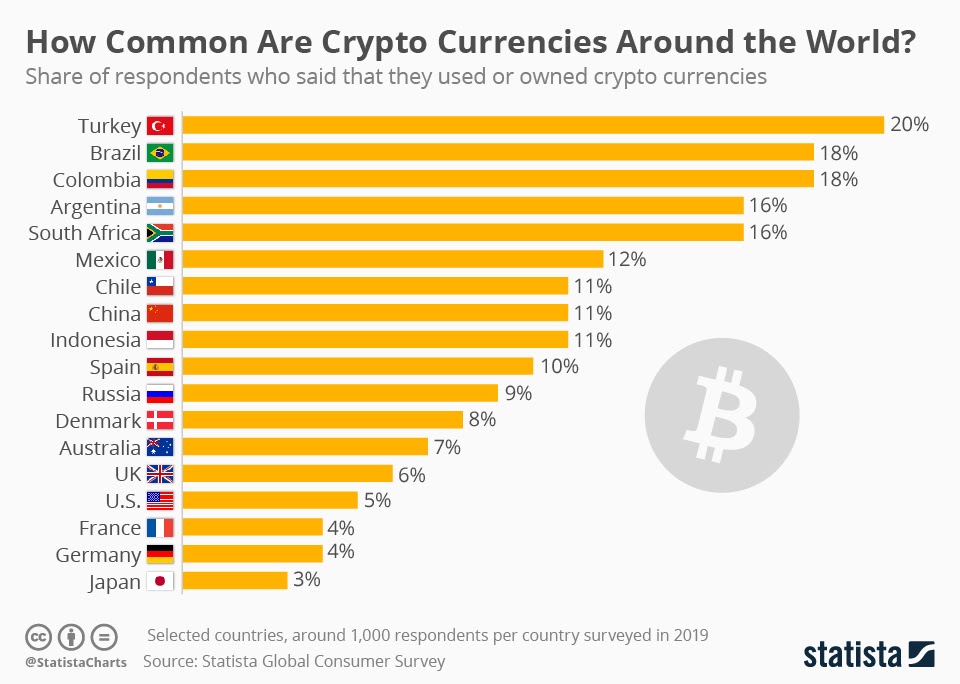 In Mexico, Bitso appears as the pioneer in the use of this type of currency and, as published by El Economista, reached 1 million users a few weeks ago. This led Daniel Vogel, CEO of Bitso, to open operations in Argentina. “Our growth is due to the fact that we believe in the potential of cryptocurrencies to improve the lives of Latin American families,” Vogel told El Economista.

According to the study ‘Cryptometer MX18: the First Study of Cryptcoin in Mexico’, carried out by Psyma Latina, Wisum, Bitso and Fiinlab, 35 percent of Mexicans who have some kind of virtual asset use it to make online purchases, while 15 percent use it to make payments in establishments. Today, a Mexican citizen can use this type of currency to make purchases on e-commerce platforms like Amazon, Expedia or Librerías Gandhi. This is considered a new boost for Mexican e-commerce, which has not stopped growing in 2020 as a result of the COVID-19 pandemic.