The pandemic has changed the way people interact with financial institutions, driving financial technologies as a result. The rise in related apps that make it easier for consumers to do their banking — some for the very first time — is among the factors spurring growth in Mexico and the Latin American region of the fintech ecosystem, including both local and foreign players.

According to a report from AppsFlyer, Mexico saw a 20 percent increase in finance apps between 1Q20 and 1Q21. The number of digital banking apps soared by 45 percent. “Mobile apps are playing a critical role in this transformation around the world and especially in large developing markets that prioritize mobile technology,” reads the report.

“The charm of these solutions has spread thanks to the benefits that respond to today’s reality. These benefits are no longer simply ‘innovative’, ‘disruptive’ or limited to certain types of users. Today, more Mexicans can request a debit card using their cellphone in real-time and receive it at their home. Today, it is also possible to receive up-to-date and accurate information regarding a bank account and to carry out traditional transactions through an app,” Aitor Chinchetru, Founder and Co-CEO of Fintonic, wrote for MBN.

By 2020, 117 foreign fintechs had operations in one or more Latin American countries, according to a study by strategic and transaction consulting firm KoreFusion, which specializes in the financial services and fintech sectors. Fintech as a Service (FaaS) is one of the most competitive categories due to limitations in local infrastructure and services, which demands solutions with more experience and expertise in more developed markets. FaaS companies hold 29 percent of the market, with 28 foreign fintechs against 69 Latin American fintechs.

The remittances and foreign exchange category holds the highest proportion of foreign fintechs, which operate in multiple regions and are global leaders. They hold 31 percent of the market, with 11 foreign fintechs versus 25 Latin American fintechs. The lending and payments segments have low market penetration, due to the high level of tailoring required to comply with local regulation and customer behavior, having only 6 percent and 8 percent of the market, respectively. Currently, Mexico has 91 active foreign fintechs in 12 categories and 28 subcategories, most of them from the US, Spain and the UK, with FDI exceeding US$270 million. 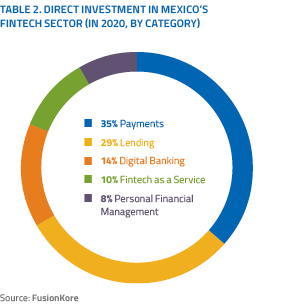 In early April 2021, Kredi was launched, offering a marketplace where Mexicans looking to buy a home can find the financing scheme that fits their needs. The startup, which plans to start investing in Mexico with about US$25 million in mortgages, is part of the growing trend to digitize financial and real estate services to address housing challenges. Likewise, Sonect, which allows users to withdraw cash using their smartphone, hit the Mexican market in mid-March. The Swiss fintech aims to create the largest ATM network in Mexico. According to the company, by providing easy access to financial services from anywhere, banks can reach more customers while businesses that handle cash can increase profits.

Overall, Mexico is the Latin American country with the most participation from foreign fintech companies, followed by Brazil with 67 and Colombia with 50. Despite a large number of companies, the KoreFusion report notes that this is a weakness in the Mexican financial ecosystem because “the high presence of foreign fintechs increases competition between them and dissuades investor interest in local competitors.” The UN Economic Commission for Latin America and the Caribbean (ECLAC), however, is much more positive about fintech developments in Mexico as the country stepped into the regulatory realm of financial technology before others in the region, the organization explained in its “Fintech Panorama” study. 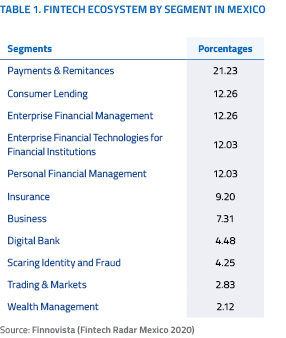 There is still a long way to go in terms of financial inclusion in Latin America. Nearly half of the entire population in the region is unbanked and less than 20 percent of a total population of 625 million reports having credit cards. In Mexico in 2020, 53 percent of adults did not have a bank account and seven out of 10 people did not have access to credit, according to Mexico’s Bank Association (ABM). However, Marcos Sacal, COO of Arcus Financial Intelligence, told MBN the future looks quite promising, with a mix of several factors driving the penetration of financial services.

Industry regulation plays a crucial role in driving the industry forward. Digital banking, contactless payments, debt consolidation, financial management and real-time payments have grown since the introduction of the fintech ecosystem and, in 2018, accelerated in Mexico with the introduction of the Fintech Law, which "has played a big role in regulating industry players and has had a huge positive impact on overall consumer confidence, as well," Sacal said. “As time goes by, more and more companies will apply for a license to operate under the Fintech Law, which will pave the way for a more fluid process and open space for new companies to be born and grow,” he wrote for MBN.

Three years after the creation of the Fintech Law, however, progress has been slow. According to industry experts, the change in government administration led to a drain of specialized talent from the CNVB and the resignation of its director general. In addition, the pandemic has slowed down the processing and authorization of this sector, which is not one of the government's priorities.

Access and adoption are usually used to measure financial inclusion, Héctor Cárdenas, CEO and Founder Conekta, told MBN. To understand if enough is being done to achieve this goal, he proposes a rethinking of how the variables are assessed. “The lack of adoption of a certain product or service can mean that people have no access to it. But it can also mean that the product or service has not become relevant enough for the public. Therefore, when it comes to understanding the adoption of financial tools, we should shift from measuring how much adoption there is among a population, to how well is the specific tool serving the population that it is intended to serve,” he explained.

According to Enrique Suárez, CEO of MountX Real Estate Capital, financial access does not necessarily mean financial inclusion. Opening a bank account or downloading an app is not enough as it does not offer a way to see if the welfare of consumers has improved. There needs to be more financial literacy to create financial inclusion and people need to understand the advantages of a healthy financial profile to advance. “Going forward, we need to build an understanding that the financial inclusion journey does not end at financial access. Rather, until people are actively using and exploiting the tools at their disposal to improve their financial situations and thus creating a society with truly shared prosperity, our job is not done,” Suárez wrote in an article for MBN.