Road for the Transformation of the Healthcare System

With an estimated 16% of Mexican citizens who still cannot access medical care, PWC Partner and Leader of Healthcare Practice José Alarcón Irigoyen believes that the system could be on the brink of a collapse, which could provoke reform and a complete overhaul of the system. Alarcón believes change must be accelerated through collaboration between the public and private healthcare sectors. Alarcón cites five mega trends that are changing the face of medical cover, not only in Mexico but globally. The first trend is changing demographics driven by a rapidly expanding middle class and an ageing population. By 2030, it is predicted that spending on the middle classes will reach US$55.7 trillion, an increase of over 250% compared with US$21.3 trillion in 2009. By 2050, 21% of the world population will be 60 years old or above. Alarcón also believes that the evolution of Mexico’s population will be very different to that of other demographics, such as Asia and Europe.

The second trend explored by Alarcón is the change in economic power. The E7 countries will increase their combined GDP to US$138.2 trillion by 2050, eclipsing the UD$69.3 trillion which will be held by G7 countries the USA, Japan, Germany, the UK, France, Italy, and Canada. The implication of a growing GDP, says Alarcón, will be a growing demand for healthcare. Healthcare will also be impacted by accelerated urbanization, with most of the population of the Americas becoming urbanized by 2030. By 2020, it is estimated that four out of every 100 people in the world will be Hispano-Americans, developing the role of the Latin-American community within the international healthcare system. In turn, urbanization impacts intrinsic

behavior, with sedentary lifestyles causing obesity, which in turn could increase medical costs by 30%. Deaths from chronic degenerative illnesses are expected to increase by 15% in the next decade. Moreover, climate change and resource scarcity will have a massive impact on healthcare, as by 2050 it is estimated that 50% more energy, 40% more water and 35% more food will be required in order to satisfy the expanding population. The implication of the need for more resources will be huge if the Seguro Popular system attempts to remain operating under the current system.

One of the most significant trends of this generation is the speed of technological advancement. In 2003, a global population of 6.3 billion people was using 500 million connected devices. By 2020, with a predicted population of 7.6 billion, there are expected to be 50 billion connected devices, which equates to roughly 6.5 devices per person. Technology, according to Alarcón, has the potential in the medical field to transmit more complex services to more remote regions and the evaluation of new technologies will be imperative in the fight to reduce costs. New generations are also looking to access medical care through new channels and patients are increasingly looking for a customer experience from their health providers, such as they would experience from any other industry. In order to account for these changes, Alarcón believes that they have to be faced on three levels. The first is on a country- wide scale, through measures to ensure efficiency and effectiveness. This will be the responsibility of public, private and industrial sectors, as well as continents and regions and will ensure political and macroeconomic stability, balance, intra-industrial competitiveness, human infrastructure, and effective legislation. The second measure will be within specific sectors and will focus on transparency, with oversight by suppliers, providers, lenders and regulators. This sector will take into account research and development, investments, and regulation of healthcare. The third level will be the responsibility of the individual entity with a focus on compliance and regulated by legal bodies and companies. The responsibility of this, segment will be the monitoring of controls, information and communication and risk assessment.

If nothing changes, Alarcón believes, the cost of the public healthcare industry will increase to breaking point. At the same time, the shortage of qualified healthcare professionals is expected to increase from 7.2 million in 2013 to 12.9 million by 2035. As a result, qualified healthcare professionals will be moving from developing to developed countries, meaning that educated healthcare professionals are becoming scarce in developing populations. At the current rate, the world will require 2.2 million hospital beds, two million extra doctors and six million extra nurses by 2034. With appropriate measures in place, a saving of US$90 trillion could be made. Mexico would be required to spend an additional 1.5% of its GDP in addition to the current 6.2% spent on healthcare in order to meet demand.

According to Alarcón, sharing resources between the public and the private sectors could be an effective way to alleviate the pressure on Seguro Popular. With the access and quality offered by the public sector, as well as the efficiency and innovation that the private sector contributes, the system could be remodeled using a combination of five accelerators. The first accelerator proposed by Alarcón is comprehensive funding for synergy between the public and private sectors, which can be done in a number of ways. Firstly, with competitive a Seguro Popular, the government can sub-contract certain non-essential services to private institutions. Another method would be increasing efficiency in a small number of specialized areas by working with private institutions. A more comprehensive option would be for the government to subcontract privatized healthcare for the 90 million Mexicans who do not have access to medical cover, dividing the costs of those who are able to pay and those who are not. Finally, certain procedures that are oversubscribed in the Seguro Popular system, such as dialysis, could be contracted to private insurance companies.

The second accelerator would be the implementation of networks in order to better proportion the type of medical attention given to patients. For example, at the moment, substantial resources are focused on hospitalization, emergency rooms and diagnostics. However, shifting the focus onto areas like preventive and primary care and specialized healthcare would mean more effective use of the budget due to early detection of illnesses and therefore less pressure on the public healthcare system. With this multichannel approach that is already implemented in places like the Basque Country and the UK using call centers and technology, the private sector could provide the infrastructure and charge according to use. Another accelerator discussed by Alarcón in which the public and private healthcare sectors could work cohesively is through strategic purchasing. The public sector would offer contracts to the private sector in certain areas, for example buying medical supplies in bulk. In effect, all of the medical supply companies would enter into bidding wars for large public contracts and therefore more competitive prices would be available for the public sector.

Accelerator four would provide private companies with payment based on results delivered. In this way, a shift in priorities would be required from targeting monetary input to focusing on outputs. Spending on medical staff and equipment would obviously still be needed, but rather than trying to stem the spiraling health problem, preventive care and early detection would be incentivized, and this in turn would result in better outcomes for the patient, therefore relieving the strain of reactionary healthcare.

The final accelerator would maximize technology use. Using mHealth, better connections can be made with patients in rural areas and the quality of care could be improved allowing medical staff to optimize time. Using this technology, Alarcón estimates that the total healthcare costs could be reduced by US$3.8 billion, freeing up 10% of the current healthcare spending for reinvestment in research and development projects. The system could also provide an additional 2.3 million patients with access to healthcare. In the Monica Pretelini Hospital in Toluca, robots have already been introduced to support physicians, facilitate medical education in hard to reach areas, reduce travel costs and increase operating room response times, with encouraging results.

In Mexico, a major problem facing the healthcare system is the focus on reactionary care rather than preventive care. Although in the short term, implementation of preventive care may be costly for the public health system, the private sector could support this process by implementing the five accelerators and over the long term, public healthcare costs could be reduced significantly. This system could not only save the government a considerable amount of money, and result in a healthier workforce, allowing the country to prosper further. 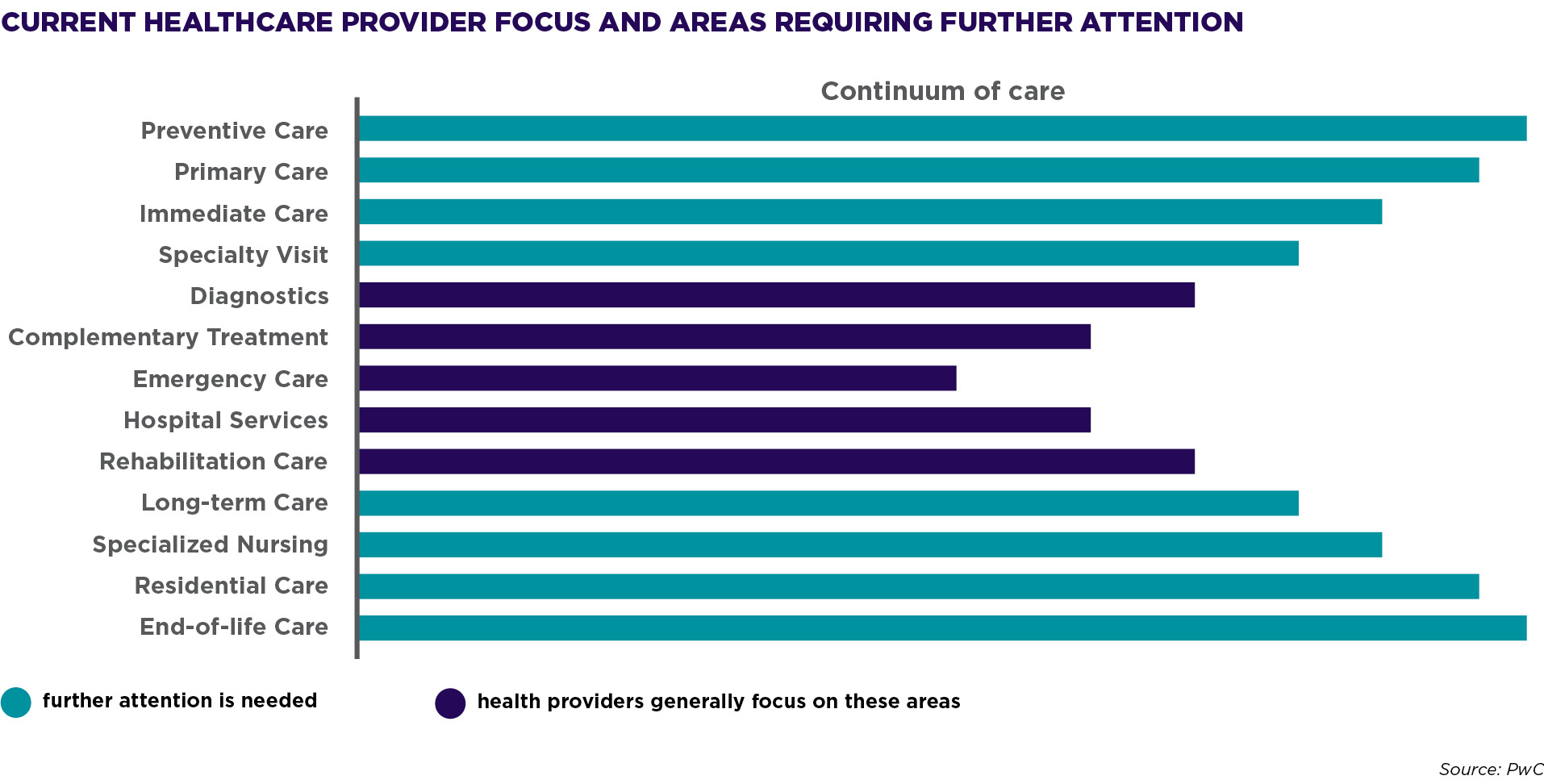