Cities have been classified, depending on their personality and particular traits, as smart, happy, digital, rebellious, creative or fast. In the end, what they all are is complex.

The theme of the 21st century, as stated by Stephen Hawking, is complexity. For Shlomo Angel, City Planning Professor at the connoted New York University’s Marron Institute, this century is itself a "planet of cities."[1]

Complexity, then, is installed through "systems, with a multidisciplinary point of view for the understanding and management of non-linear processes in nature and society"[2].

Philip Kotler expresses it clearly in regard to our theme: "a city has to develop not only an alternative social life, but also an economic life and a solid future. Each city has its own Gross Domestic Product (GDP) and the assumption is that, if the GDP is growing dynamically, the city is generating new jobs, and its citizens are prospering.[3]"

Cities have a higher growth rate than their respective countries. Increasingly, countries are the beneficiaries of city growth. Between 2010 and 2015, the average GDP growth in cities was 90 percent and it is estimated that between 2015 and 2025, growth will be 56 percent. In terms of countries, in those same years, the average growth rates are 24 percent, with an expectation for 36 percent by 2025.

The following infographic shows the components that converge, organize and are self-organized in a city – as cities are a dynamic and simultaneous system where intrinsic, contextual and extrinsic elements are managed. 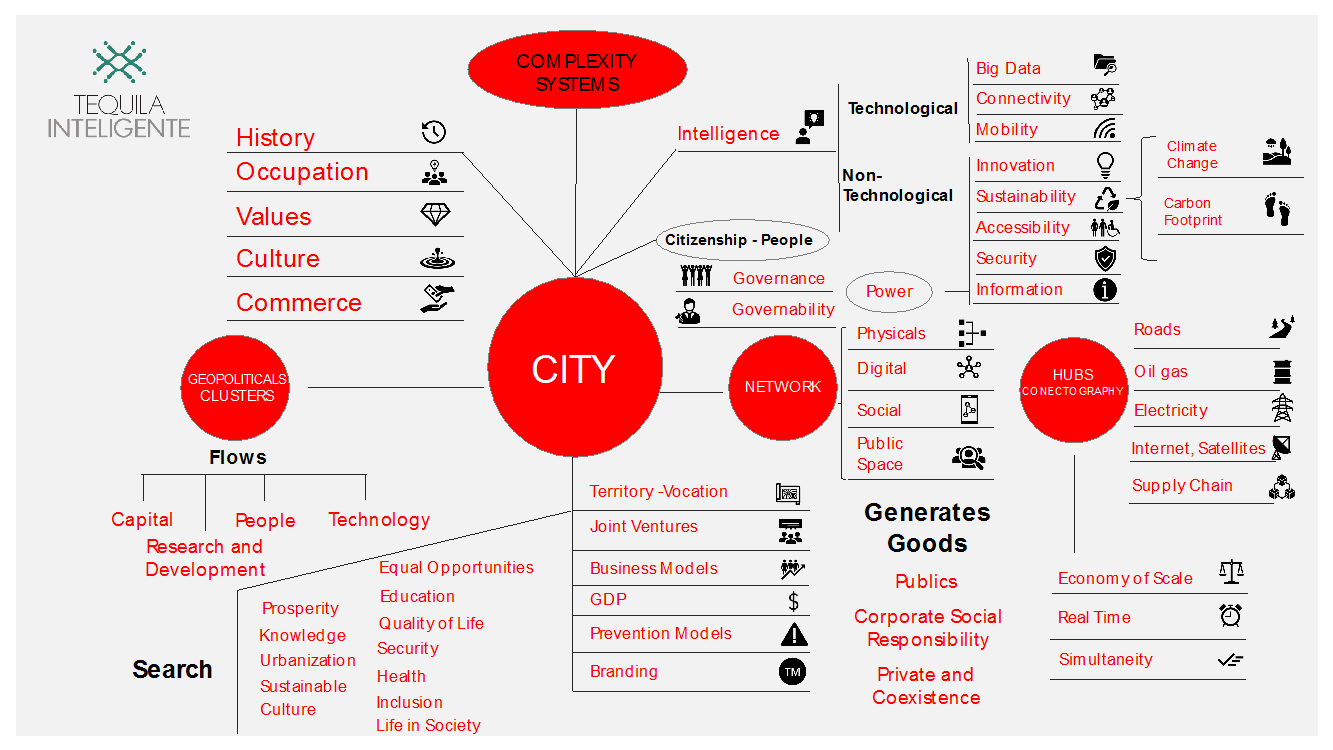 A city is a network and a hub; it has a vocation, a physical and a digital infrastructure. It generates economies of scale and is a space of coexistence. It is part of a cluster that manages technological and non-technological intelligence, has a carbon footprint and is sustainable. It is in a territory, and is also a place where flows of capital, technology and people converge, where power and governance are exercised. It is immersed in a culture, and has a brand. In a city, prosperity, life in society, knowledge, security and equal opportunities are sought. And by its very systemic nature, it generates different positive and negative impacts, according to its management.

One example: the city of Tequila. As a Smart Tourism Destination, Tequila has conceptualized its strategy based on complexity. It has promoted governance, big data, traceability, mobility, connectivity, territorial planning and sustainability simultaneously, allowing for its differential maturation and achieving significant results and a variety of impacts, year after year.

If anything has been made clear by this pandemic, it is that we do not know how to manage complexity, and that interrelated problems with different impacts are not only dissimilar from their components, but another animal altogether. As the author Matthew E. May states, "Asians saw a jungle that happened to have an elephant in it. But Americans saw an elephant without taking much notice of the jungle (…) we have to focus on the jungle that happens to have elephants in it, as opposed to examining elephants of any particular kind."[1]

We were not prepared, in a linear and sequential world of certainties and the pursuit of progress on a safe planet, for the challenges that we were about to face. The approach, now, needs to be completely different in a context of climate change, simultaneity, exponentiality, sustainability and social responsibility. In short: in a context of complexity.

There is no longer an Ariadne's thread to get us out of the problem.

Instead, there are more and more unforeseen minotaurs jumping at us at every turn.