Highlights of the World Silver Survey 2022

Physical silver investment (sales of silver coins and bars) leaped by 36 percent to 278.7 Moz, its highest level since 2015, as retail investors in North America and Europe, motivated by safe-haven and inflationary concerns, took advantage of periodically lower silver prices to purchase coins and bars.

Of note, last year, the silver market experienced its first deficit since 2015, at 51.8 Moz, its most significant shortage since 2010.

All categories of silver demand strengthened last year, taking the annual total to 1.05 Boz, an impressive 19 percent gain over 2020. Industrial fabrication rose by 9 percent to 508.2 Moz despite global logistical challenges. This increase reflected the effects of a resumption of industrial operations and the re-opening of businesses as economies began to recover from COVID. Other supportive factors included the demands of the home-working economy, strong consumer electronics demand, 5G infrastructure investment, inventory build along the supply pipeline, and rising silver consumption in the green economy, chiefly in photovoltaics. There was also little pressure from substitution and thrifting, primarily as silver prices were viewed favorably.

Silver’s use in photovoltaics increased 13 percent to 113.7 Moz as global solar installations grew, while electronic and electrical demand overall rose by 9 percent to 330 Moz. Last year, silver also saw rising end-use in the defense and aerospace sectors. Brazing and alloys accounted for 47.7 Moz, representing a 6 percent gain over 2020. 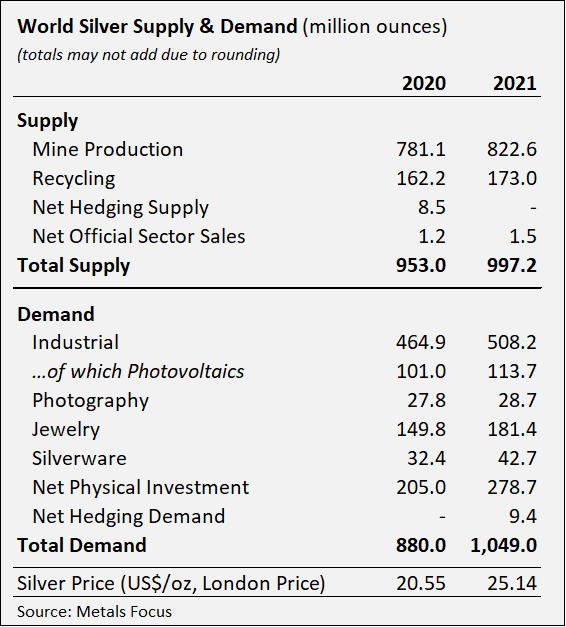 Silver’s use in photography grew in 2021 by 3 percent to 28.7 Moz, bucking the long-term trend of decline. Last year, some demand recovery came from the medical sector, which battled to work through the backlog of delayed X-rays built up when hospitals were overwhelmed by COVID.

Silver jewelry fabrication jumped by 21 percent in 2021 to 181.4 Moz. On top of soaring consumption, fabricators also benefited from rebuilding stocks, which had fallen in 2020. India paved the way for silver jewelry demand, with a 45 percent jump to 58.7 Moz, while Thailand posted 24.8 Moz, followed by Italy at 20.4 Moz and the United States with 13.2 Moz. Coming off a somewhat disappointing 2020, silverware demand recovered by 32 percent in 2021 to reach 42.7 Moz. India led the world in silverware offtake at 24.4 Moz, Nepal at 4.8 Moz and China at 2.7 Moz.

Physical silver investment grew 36 percent to 278.7 Moz, the highest level since 2015. Against a backdrop of uncertain economic growth, increasing inflationary concerns, and stubbornly negative real rates, retail investors in North America and Europe took advantage of lower prices to purchase silver coins and bars. In India, sales of silver bars and coins more than tripled, with much of the growth emerging in the second half of last year.

2021 was another year of net annual inflows into silver-backed exchange-traded products (ETPs.) With a rise of 65 Moz, combined ETP holdings rose to another record high of 1.13 Boz. Gains were concentrated early in 2021, benefiting from the social media focus on silver. Notably, there was little sign of liquidations during late 2021, which typified the institutional investment market.

Global mined silver production grew by 5.3 percent in 2021, reaching 822.6 Moz. This increase was the most significant annual growth in mined silver supply since 2013 and was driven by the recovery in output following COVID-19-related disruption in 2020. Silver production from primary silver mines increased by 10.2 percent, as they are concentrated in countries where mining was heavily impacted by COVID restrictions in 2020. The recovery from pandemic-related disruption also led to higher silver output from gold and lead-zinc mines, by 5.8 percent and 5.1 percent, respectively. Mexico was the number one silver producer in 2021, followed by China, Peru, Australia, and Poland.

Led by a jump in industrial scrap supply, global silver recycling climbed by almost 7 percent in 2021, to an eight-year high of 173 Moz.

Primary silver mining total cash costs (TCC) and all-in sustaining costs (AISC) fell for the second consecutive year. TCC dropped to US$3.88, an 18 percent decline over 2021, and AISC dipped to US$10.88, a 3 percent decrease over last year.

Geopolitical and economic issues, including the Russian invasion of Ukraine, multi-decade-high inflation, lower global growth projections, and increasing interest rates, present challenges to forecasting precious metals this year. Nevertheless, Metals Focus forecasts a 5 percent rise in global silver demand due to further structural advancements in industrial fabrication, which is expected to achieve another record high in 2022. Jewelry and silverware demand should continue their post-pandemic recovery this year. On the supply side, higher mine production is also expected due to project ramp-ups and some gains in established mines’ output, coupled with a rise in industrial recycling, to drive a 3 percent increase in global supply in 2022.

Physical silver investment is likely to be broadly flat this year, as a modest fall in western investment will be offset by further gains in India. Investment in ETPs is forecast to increase by 25 Moz for a fourth consecutive annual rise. The average yearly silver price is forecast at US$23.90, which, if realized, would represent the second-highest yearly average since 2011.