For the mining industry, 2016 was a year of two halves. A recovery in metals prices motivated the industry to believe an upswing was finally on the way. But even with global geopolitics causing a strain, miners believe they have reason to celebrate.

For the global mining industry, 2016 was a year of two halves. A recovery in metals prices motivated the industry to believe an upswing was finally on the way. But even with global geopolitical events causing a strain, many miners believe they have reason to celebrate.

Metal prices recovered strongly during the first six months after a painful, four-year downturn. In June, gold rose to US$1,361/oz, its highest price since 2013. But the latter part of the year was dominated by the political shockwaves of Brexit and the US presidential election result; gold fell by 15 percent and silver by 19 percent during 2H16 as investors sat back, scratched their heads, and wondered “What next?” But prices rebounded during the first half of 2017, a result of improved economic performance in China and a depreciation of the US dollar. The industry may have finally turned the corner.

In Mexico, the creation of the Undersecretariat of Mining at the Ministry of Economy was announced in December 2016 in what felt like a seminal moment for the industry. Despite its geological potential, total investment in the Mexican mining sector fell 20.9 percent in 2016. The challenge facing the new Undersecretary for Mining, Mario Alfonso Cantú, is to rejuvenate a traditional sector still struggling to fulfill its potential in the modern age.

“The Undersecretariat was created as an acknowledgement of the importance of mining as a strategic activity,” says Cantú. “It was a response to the industry’s expansion and the need for regulation, promotion and development.”

In the context of Mexico’s sluggish growth in 2016 – an expansion of just 2.3 percent compared to the global average of 3.1 percent – there were encouraging signs of recovery for the local mining sector. After FDI crashed in 2015 to just US$370 million – a byproduct of controversial fiscal reforms implemented the previous year – foreign investment bounced back in 2016 to US$718 million, a jump of 94 percent. This is still some way off the US$2.1 billion that foreign investors poured into the sector in 2014 but a positive sign of returning confidence nonetheless.

The green shoots of recovery were also present on the production side. Mexico’s total value of metal and mineral production in 2016 surged to a record high of MX$234.3 billion, 9 percent more than the MX$213.3 billion output the previous year. Once again, gold made the largest contribution to the total value with 37.4 percent, followed by copper (19 percent) and silver (18 percent). According to IMSS, the sector generated 9,790 new jobs in 2016, more than twice the number of new jobs in 2015. The industry now employs over 354,000 people in Mexico.

Like many commodities, gold suffered a volatile 2016 as unprecedented political shifts took their toll. After a strong start to the year, rising 25 percent to US$1,361/oz by June 27, bullion prices began to fall off in July and continued to falter in the build up to, and aftermath of, the US presidential election that put Donald Trump in the White House. Between Oct. 24 and Dec. 25, the price of an ounce of gold fell 13 percent to US$1,133/oz from US$1,304/oz. The “Trump Bump” was more of a “Trump Slump” for precious metal investors. But the commodity rebounded in 1H17, rising steadily to reach a sixmonth high of US$1,293/oz in July as uncertainty continued to roil international marketplaces.

Annual gold production for the year fell by 0.2 percent to 99.7 million ounces worldwide. For the second year running, Mexico placed eighth on the global list of gold output, second in Latin America behind Peru, with a total of 4.26 million ounces. On the corporate side, Fresnillo overtook Goldcorp as the country’s top gold producer after churning out over 935,000 ounces of bullion, a 22 percent YOY improvement. Goldcorp’s fall into second place was a result of its commitment to stripping its portfolio of noncore assets, a strategy that resulted in the sales of the Los Filos, Camino Rojo and San Nicolas projects during 1H17.

Fresnillo’s La Herradura asset was the most productive gold mine in the country, ahead of Goldcorp’s Peñasquito, with 520,400 ounces. Then, in 2017, Fresnillo outlined a new US$110 million investment plan for La Herradura.

After falling for five consecutive years from 2011, the silver price finally turned a corner in 2016 and continued the upward curve in 2017, never dropping below the US$15/ oz mark during the first half of the year. With strong demand from solar energy and electronics, the price was underpinned by falling supply. According to figures compiled by The Silver Institute, global mine production of silver fell by 0.6 percent to 885.8 million ounces in 2016, the first yearly drop since 2002, while scrap supply also fell for the fourth consecutive year.

Mexico comfortably retained its place at the top of the silver production tree, producing 173.9 million ounces and contributing 21 percent to global output, according to INEGI. Peru was second with 16.7 percent, followed by China (12.7 percent) and Chile (5.4 percent). Fresnillo was once again the top producer in Mexico (and the world), with 45.7 million ounces, followed by Goldcorp and Industrias Peñoles. With 21 million ounces of silver produced, Fresnillo’s Saucito was the most productive silver mine in Mexico, followed by Peñasquito and the Fresnillo mine.

Fresnillo’s strong performance continued into 2017, reporting 1H17 silver production of 28 million ounces, up 11.2 percent against 2H16. The company is aiming for 65 million oz/y silver output by 2018. With its entire producing portfolio in Mexico, the fundamentals for the national silver industry look strong.

After reaching a low of US$4,310/t in January 2016, many believed the outlook was bleak for copper. But prices shot up in October and finished the year on the London Metals Exchange (LME) trading at US$5,500/t. Then, thanks to a more solid forecast in Chinese economic growth and a possible scrap metal ban in the country, in July 2017 copper reached US$6,292/t, its highest level in two years. According to Reuters, China accounts for 45 percent of global demand for the brown metal.

Mexico remained in 10th position on the list of global copper producers, contributing 766,000 tons – or 3.2 percent – to the total copper output, which amounted to 19.4 million tons. But this hides a spectacular YOY rise of 28.9 percent in national production by year-end 2016, buoyed mainly by the significant expansion at Grupo México’s Buenavista del Cobre mine, which produced 316,000 tons. 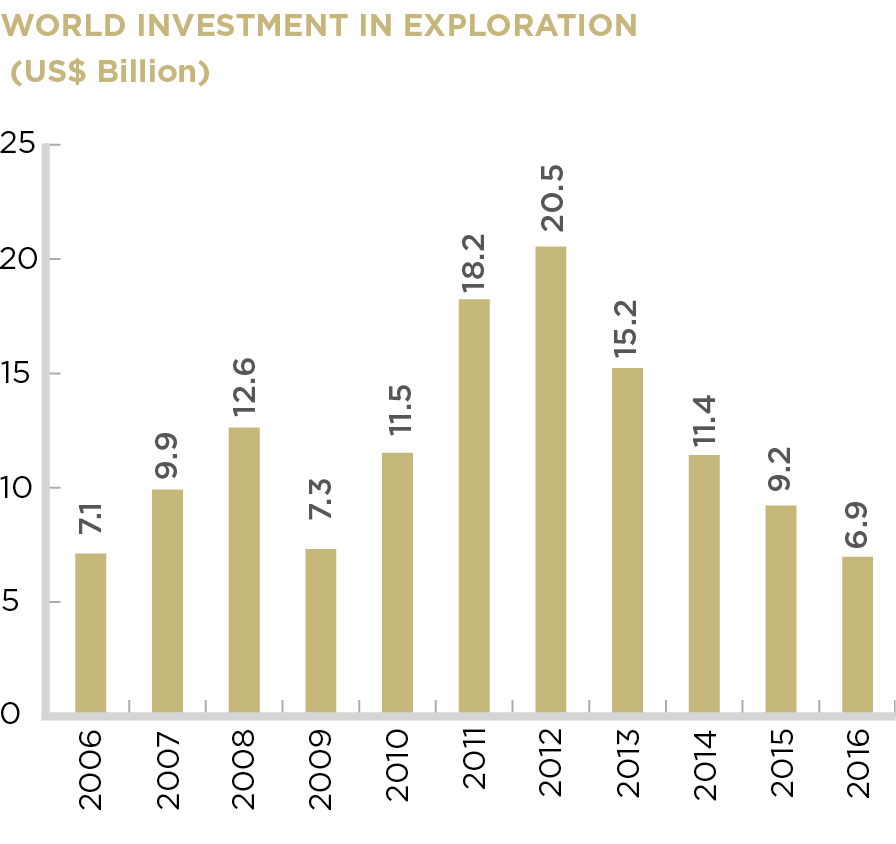 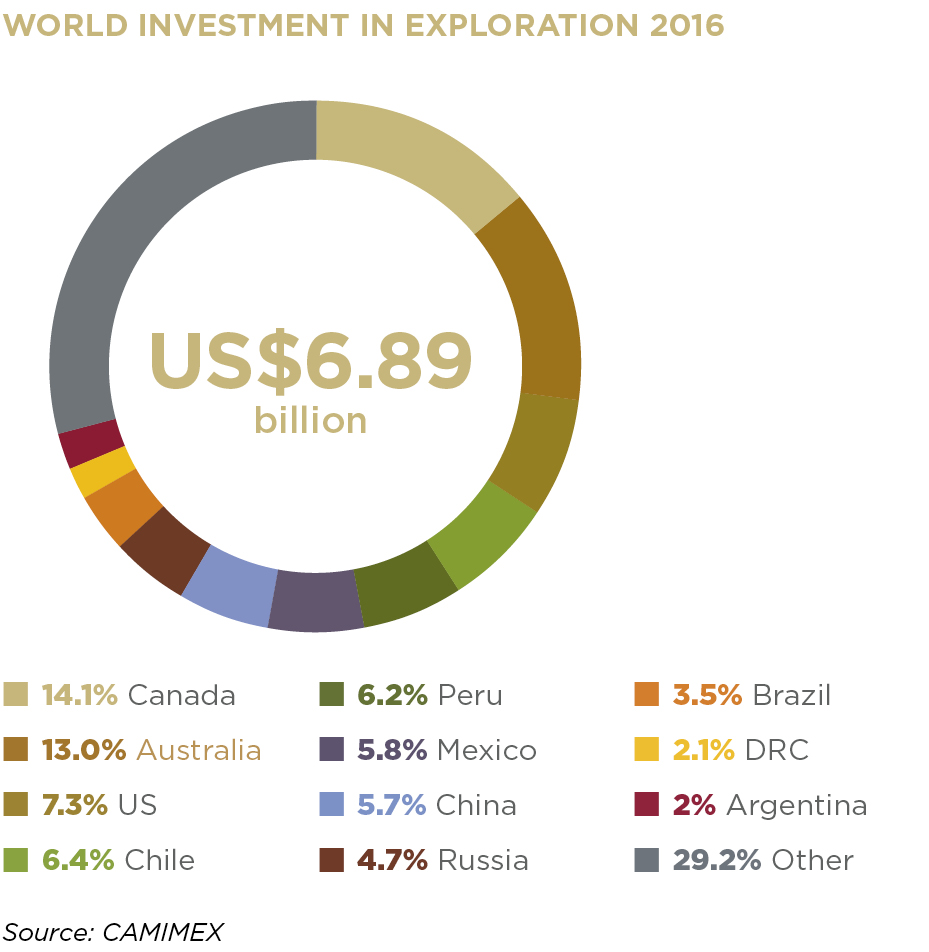 EXPLORATION COMES BACK TO LIFE

As the lifeblood of mining, spending on exploration is always an important indicator of the current state of the industry. According to S&P Global Market Intelligence, world investment in exploration fell YOY by 28 percent to US$6.9 billion, the fourth consecutive yearly fall, suggesting that investors are yet to be entirely convinced of the longevity of the price recovery.

The situation in Mexico is complex. Following the 2015 fiscal reforms, companies are no longer able to deduct exploration expenses after a project’s first year; they now must wait 10 years to be reimbursed. The ruling provides a significant financial obstacle for cash-short junior exploration companies. But after falling to seventh place on the list of recipients for global exploration expenditures in 2015, Mexico climbed up one place to sixth in 2016 after attracting US$400.9 million in total. Canada is still first on the list, ahead of Australia, the US, Chile and Peru.

The positive trend is also reflected in the number of new exploration projects in Mexico. In 2016, mining companies started work on a total of 55 new projects, with a total value of US$130 million. This is compared to 44 projects with a total value of US$103 million in 2015. Buoyed by the improved price environment, a number of exciting development projects, including Timmins Gold’s Ana Paula, Fresnillo’s Juanicipio, and Industrias Peñoles’ Rey de Plata, have advanced well and should be coming online during 2018, underpinning Mexico’s future production profile.

Despite the signs pointing to a bright future, the mining sector in Mexico still faces several challenges. Most pressing is the ongoing standoff between the public and private sector on a number of tax-related issues. In early 2017, the Federal Chief of Governmental Audit released a report claiming that 59 mining companies had not met their financial obligations to the Mining Trust Fund -- allegations the companies deny. In June, Reuters reported that the federal tax agency SAT owes Canadian miners a total of US$360 million in back taxes.

Then there are the infamous “Ecological Taxes” announced by the State Government of Zacatecas, a proposal that infuriated and alienated companies working in the region. The issue is being considered by the Supreme Court of the Nation (SCJN); if the tax is deemed constitutional and implemented, it would set a dangerous precedent for other states. Against this backdrop, the 8 percent tax slapped onto precious metal production in 2014 continues to rile operators. If the corporations and the government cannot resolve their differences, the sector is certainly in danger.

There are other issues. Mining companies regularly run into conflict with local communities and ejidos over land use. More could still be made of the opportunities afforded by the digital revolution. And the industry at large is still struggling to correct its image as a reckless exploiter of natural resources.

The global mining sector is moving forward. Mining companies are not immune to the insecurity and inconsistency affecting global financial markets but metal prices nevertheless rose steadily during 2016 and 1H17. Considering the strong demand fundamentals provided by the blossoming electric car, solar energy and electronics industries, coupled with the ever-improving technology making mining operations more productive and cost-efficient, this trend can be expected to continue. With many of the world’s largest mines running out of steam and resources, mining companies must now renew the industry’s faith by investing more in exploration to prepare the global production pipeline for the demands of a digital, environmentally responsible world.

The priorities for Mexico are clear. The country has enormous mineral potential, a fact reflected in the increased exploration activity in 2016, but it is not the only country in Latin America to be blessed with abundant natural resources. To woo international investors, the government – and particularly the Undersecretariat of Mining – must provide the basic regulatory and financial framework to make the mining sector attractive. With presidential elections on the agenda in 2018, the incoming administration must also remember that miners appreciate operational stability and consistency above all else.

But co-operation is a two-way street; mining companies working in Mexico have to show willingness to work alongside the public sector and, if necessary, challenge new legislation according to legal protocol. If the entire mining community can use its respective strengths as a collective, the sector can expect to thrive.