A Standardized Future for Licensing Rounds

Speed and transparency have characterized the licensing rounds, with the industry particularly pleased that regulators are listening to their concerns. Expectations are high for the coming three stages of Round Two.

In just under three years since the Energy Reform was approved by Mexico’s congress, making amendments and additions to articles 25, 27 and 28 of the Mexican constitution, regulator CNH has awarded 38 contractual areas to a range of participants through Round One. As well as the 13 license contracts and 25 production sharing agreements involved in Round One, PEMEX’s first ever farm-out was completed together with deepwater Round 1.4, while a second shallowwater farm-out is planned for October 2017. Another 41 are up for auction through the first three stages of Round Two in mid-2017, with a deepwater and unconventional resources round to be announced shortly.

“I do not know how one cannot admire what has been happening in Mexico in the last two years. Very few countries have pulled it off in this fashion, at this rate, building this much momentum,” says Jorge Leis, Partner and Lead at Bain & Company’s Oil and Gas Practice in the Americas. Indeed, he rounds so far have been praised for their transparency, swiftness and responsiveness to industry concerns. Mexico’s regulators are now speeding ahead with the standardization of the process, as announced in the Ministry of Energy’s updated Five-Year Plan published in March 2017. Following the original version published in 2015, Mexico’s Ministry of Energy released this latest document outlining modifications to the original “Five-Year Plan for Exploration and Production of Oil and Gas 2015 – 2019.” Citing the demands of an evolving industry, the document outlined a number of pivotal additions and adaptations that are set to optimize the way oil and gas licensing rounds are planned, designed and held in Mexico.

Three main elements were highlighted. First is the goal to standardize the bidding process, from the size of the blocks to the prequalification process and the calendars for each round. Secondly, the industry will now be allowed to nominate the blocks they wish to see appear in future licensing rounds, subject to sound technical studies and approval by Mexico’s Ministry of Energy. Finally, a record of prequalified bidders will be kept and constantly assessed in a bid to simplify the administrative processes.

The news that operators can have their say in the blocks chosen for auction is music to the ears of Kevin Smith, Vice President of Business Development at Renaissance Oil Corp, winner of three onshore blocks during Round 1.3. “The FiveYear Plan clearly reflects feedback given by operators to make the bidding system more flexible. We are the guinea pigs but we are happy to accept the challenge because we can see our feedback shaping the industry,” he says.

While the Ministry of Energy sets Mexico’s energy policy, industry regulator CNH is editing the contractual terms of each bidding round at every stage of the process. During the four stages of Round One, the contracts were redrafted a total of 16 times. This flexible approach extended to the Trion farm-out terms, which were gradually loosened as the government took on the suggestions of the private sector. Changes included allowing operators to bid on Trion as individuals rather than groups as previously demanded and cutting PEMEX’s stake in the joint venture to 40 percent from the original 45 percent. In the end, BHP Billiton snatched the opportunity to partner with PEMEX, beating BP, which also bid individually. This shows the importance of the changes CNH implemented just three months before Round 1.4 was due.

The success of the Trion farm-out wrapped up Round One and came on the back of Mexico’s first deepwater licensing round, during which eight of 10 contractual areas were awarded to a range of national and international bidders.

The positive result matched the previous onshore Round 1.3, when 100 percent of the 25 blocks were awarded.

The overwhelming success of the final two stages of Round One offset its more sobering start. Round 1.1 and 1.2 respectively, saw just five out of the 19 contractual areas available awarded. One notable difference between the first two and the final two stages was a change in contractual structure. Round 1.1 and 1.2 involved production sharing agreements, whereas the final two involved license contracts. As well, the industry reacted favorably to the evolution of CNH’s contractual terms, upping the ante in terms of participation and competition.

The 14 blocks offered in Round 1.1 were purely exploratory, increasing the risks faced by potential operators, whose bids were also facing the uncertainty associated with the first bidding round in Mexican history. Round 1.3’s onshore blocks were viewed as more accessible for first-time operators and less risky than more expensive offshore ventures. In comparison, Round 1.4 showed operators bravely betting on Mexico’s oil and gas market despite the high financial and operational risks involved in deepwater activity.

Hopes are high for Round One’s positive streak to continue into the first three stages of Round Two. This round comprises one shallow-water and two onshore stages, which will be held on the same day. No less than 27 companies, including a who’s who of the international oil and gas industry, have started the prequalification process for the first stage of Round Two. They will be assessing 15 shallow-water exploration and production blocks to be auctioned in the stage, with the final results announced on June 19, 2017. Ten of the 15 fields, spread out along the coast of Veracruz, Tabasco and Campeche, contain crude oil and gas reserves, while the remaining five contain gas reserves only. They range in area from 466km2 to 972km2, with an average size of 595km2.

The second leg of Round Two includes 12 onshore exploration and production blocks to be auctioned off on July 12, 2017. Nine of the blocks are located in the northeast regions of Tamaulipas and Nuevo Leon, known as the Burgos Basin, and contain exclusively gas reserves. The remaining three are in the southeast regions of Chiapas and Tabasco and contain superlight and light crude oil reserves. They are all similar in surface area, ranging from 360km2 to 479km2, with an average area of 396km2. “We are definitely interested in the second set of bidding rounds,” says Carlos Morales, Director General of PetroBAL. “Our final decision will be based on the conditions of each block and we will come to reasonable offers once we determine how attractive each one is.” Nine companies had started the prequalification process by the end of April.

Round 2.3 also has an onshore focus and will take place on July 12, 2017, the same day as Round 2.2. According to CNH, nine companies had started the prequalification process for this round by the end of April, which includes 14 onshore exploration and production blocks spanning the Burgos, Tampico-Misantla, Veracruz and Southeast Basin areas. By the end of April, 35 companies had shown interest in this round, including a number of winners from Round 1.2 and 1.3, and 22 had started the prequalification process. 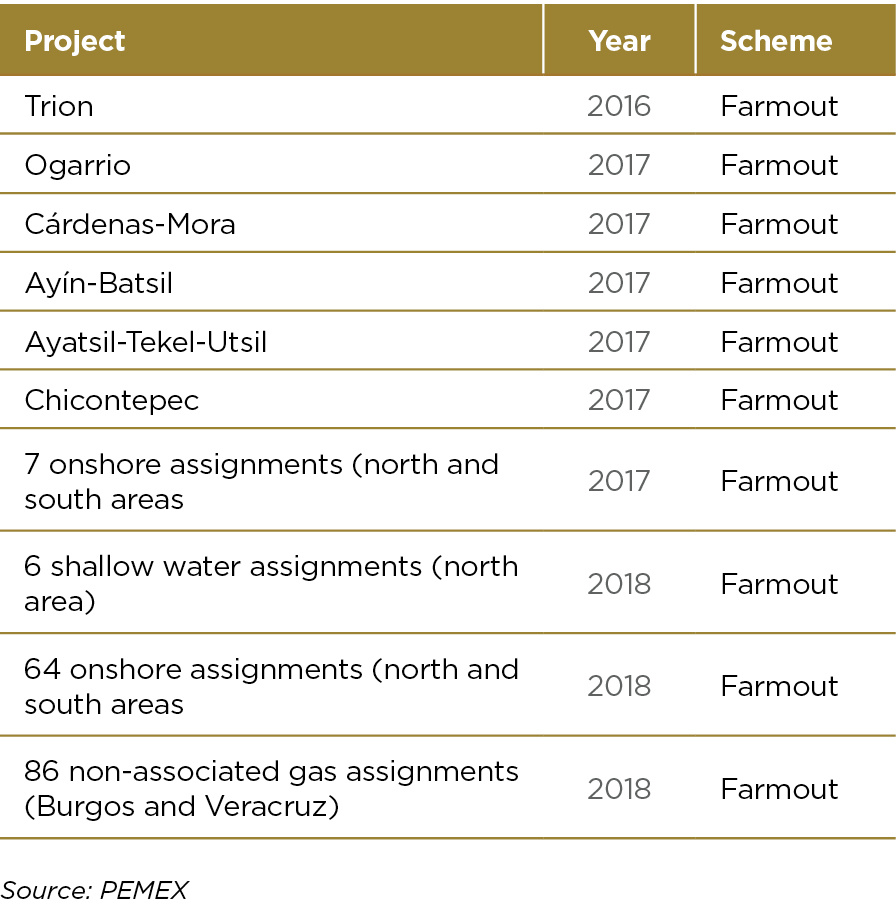 Farm-outs were highlighted in PEMEX’s 2017-2021 business plan together with operational efficiency and effectiveness and a focus on strategic activities as way in which the company will seize the historic opportunity created by the Energy Reform. The proof is in the pudding; BHP will contribute US$1.19 billion on behalf of PEMEX in the Trion farm-out it won in December 2016, says Gustavo Hernández, Director of Prospective Resources, Reserves and E&P Partnerships of PEMEX.

According to Hernández, while December 2016’s Trion farm-out attracted two of the biggest names in oil and gas; winners BHP and second-place BP, onshore farmouts Ogarrio and Cárdenas-Mora are drawing the interest of more mid-sized and Mexican firms.

“They vary from deepwater farm-outs in the sense that these fields are currently productive, with an output of around 7,000 b/d each,” Hernández says. The maturity of the blocks and nearby infrastructure are factors that increase certainty for vying companies and thus facilitates the participation of smaller firms, as well as lower required investment quantities.

In addition to the land-based Ogarrio and Cárdenas-Mora farm-outs, a share in PEMEX’s shallow-water Ayin-Batsil field will also be up for auction in 2017. The block is located in the Campeche Sound, 70km from Cantarell and KuMaloob-Zaap.