The onshore Samaria Luna asset is located 20km northwest of Villahermosa, Tabasco. It was discovered in 1960 and holds mostly heavy and extra-heavy oil reserves in the mature fi elds of Samaria, Íride, Carrizo, and Patatal, as well as the other 11 fi elds. The total 3P reserves in its 15 fi elds account for 259 million bbl of oil, with a current recovery factor of 20%, and 38 bcf of gas, with a recovery factor of 3%, while 1P reserves for the fi eld tally 63 million bbl of oil and 21 bcf of gas. The fi rst producing well drilled in the complex was Samaria-2, which produced only 96 b/d of 14°API oil. After drilling 110 wells in total and having 70 currently operating wells – of which 59 produce heavy oil and 11 produce extra-heavy oil – total production fi gures accumulate 205,128 b/d of oil and 695.9 mcf/d of gas.

The Samaria fi eld delivers around 40,000 b /d of oil, which makes up for just over one fi fth of the asset’s total daily oil production, and 52.5 mcf/d, which represents only 7.5% of the total daily gas production in the fi eld. The fi eld is composed of a 4.4km2 heavy oil area and a 7.9km2 extraheavy oil area. The porosity found within the fi eld is around 20-40% PHI, while the water saturation varies from 10-20% Sw in the extra-heavy oil zone and 10-30% Sw in the heavy oil zone. Rock permeability also changes from zone to zone; while it deviates from 3,000 to 5,000 milidarcys in the extra-heavy oil areas, it goes from 400 to 4,000 milidarcys in the heavy oil areas. The density of the extra-heavy oil found there varies from 5-10° API. The heavy oil found, on the other side, has an API of 12-18°. The Samaria fi eld has undergone four di erent stages in its production life cycle. The fi rst stage, from 1964 to 1976, saw Samaria undergoing its development stage and early production phase. During this stage, 20 development wells were initially drilled, and production topped o at a fi gure of 2,800 b/d. The second stage consisted of three di· cult years from 1977 to 1979, during which the major highlight was the discovery of oil within the Mesozoic formation. After the discovery, Samaria had to be closed due to maintenance problems. This led to the fi eld’s third stage. Maintenance and repair services had to be performed on the wells within Samaria to get it back to optimal production, and Samaria’s production peaked at 2,900 b/d.

The fi eld was reactivated in August 2007, starting the fourth stage of its productive cycle. Since then, 71 wells were drilled and 74 major revamps were performed. Enterprise resource planning (ERP) software SAP was installed and the working units within the fi eld pushed for fl ow improvement, resulting in better production results. Since 2009, tertiary recovery techniques were used in the fi eld to enhance production in the form of cyclic steam injection. This technique was applied using both cold steam and hot steam; eight wells were drilled with cold steam, with a 100% success factor at the di erent geometries (four vertical, three horizontal, and one directional), while an additional 11 wells were drilled with hot steam, and two injection cycles per well, with a success factor of 65%. The objective of the project was to reduce the viscosity of oil by injecting steam into the reservoir. This would allow an increase the oil mobility and maximize the production of the well. In the same time, cold water injection was to be experimented with to see the results it could bring. Extra-heavy oil was extracted from cold steam injection, with a cost oil of 70 b/d in vertical wells and 300 b/d in horizontal wells. This confi rmed that cold water injection was viable in the fi eld. On the other side, with hot steam injection, the cost of oil went up from 70 b/d to 1,200 b/d but the technique managed to improve the hydrocarbon fl ow in the wells.

The fi eld is divided in two areas: one reservoir of 3.2 km2 containing heavy oil and a 4.3 km2 reservoir with extra heavy oil. Porosity ranges from 18-22% PHI in its heavy oil and is consistent at a 24% fi gure in extra-heavy oil. Water saturation within the fi eld is of 35% Sw and the density of the heavy oil most recently found varied from 18-24° API. The Carrizo fi eld was awarded to Schlumberger in the fi rst round of integrated service contracts. 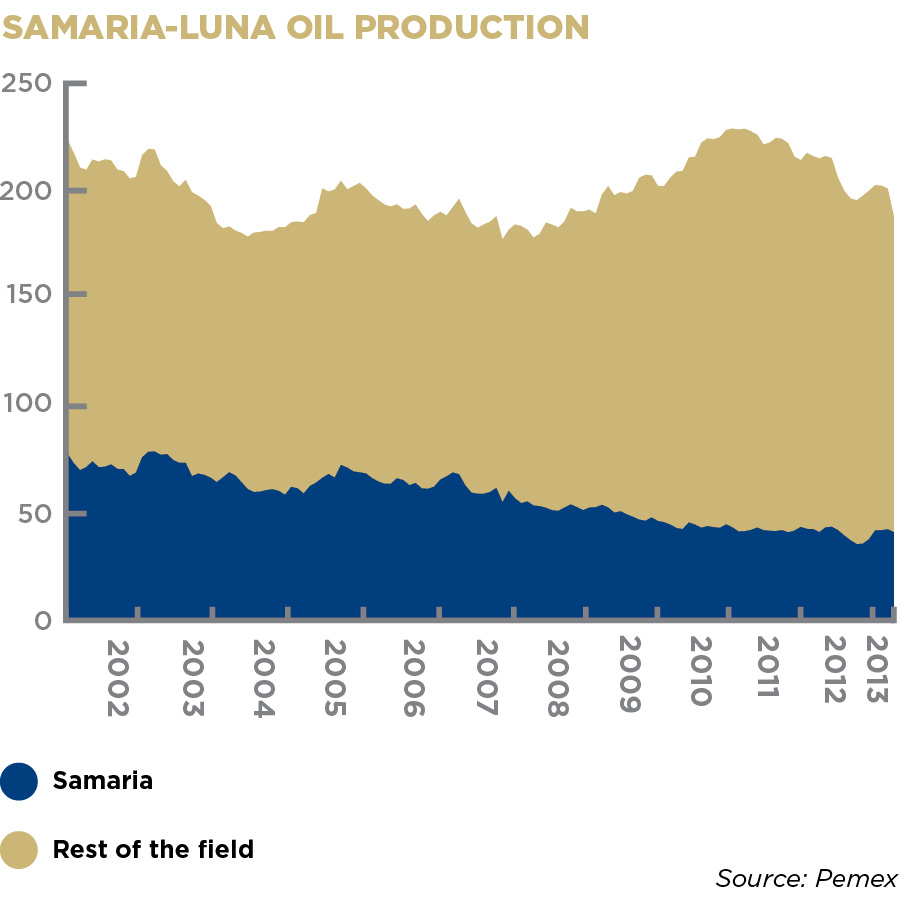