The US has agreed to allocate resources for the creation and implementation of the Sowing Opportunities program (Sembrando Vida), which seeks to benefit Central American countries by reducing migration and addressing its main causes. The decision to fund the program was part of the agreements reached at the North American Leaders Summit.

At the trilateral meeting between President López Obrador, US President Joe Biden and Canadian Prime Minister Justin Trudeau, it was decided that the US would invest in the Sowing Opportunities program, which was previously proposed by López Obrador to improve the quality of life in Central America and southern Mexico. The new program is expected to benefit around 540,000 people in the region and reduce migration to the US.

"We will be working with US agencies in the coming days. It is very important to us that there has been a response to what President López Obrador has been proposing in relation to migration," said the Foreign Minister, Marcelo Ebrard.

For months, the Mexican government has pushed the Biden government to consider implementing the Sowing Life and Youth Building the Future programs in Guatemala, Honduras and El Salvador, as they could address the main migration problems in the region. The proposal was well received during the Summit by the governments of the US and Canada, and more talks are expected to begin soon aimed to develop a  concrete plan, Ebrad said.

In addition, it was decided at the Summit that vaccines would be donated to other Caribbean and Latin American countries to help them rapidly increase their vaccination rates. Mexico reported that it will donate around 2 million doses to various countries in the coming months. "It was agreed that the three countries would support Caribbean and other Latin American countries that have not had the possibility of accessing the number of vaccines needed," said Ebrard.

The program Sowing Life seeks to create jobs and reactivate Central America and southern Mexico´s local economies by addressing the region's two main problems: rural poverty and environmental degradation. However, according to experts, this is a long-term plan and is not designed to address many of today's problems.

In addition, three years after the program began its implementation in Mexico, it has been classified as low quality in design and in compliance by the Federal Public Programs Performance Index (INDEP) 2021 elaborated by the non-governmental organization Government Social Cooperation and Management (GESOC). GESOC explained that the program aimed to benefit 1.8 million people in the country´s 32 states. However, it has only benefited 415,692 people in 20 entities. 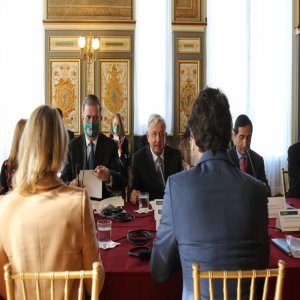