Is there a link between internet fraud and inflation? At Bayonet, the company I co-founded, we protect digital businesses from fraud. As a result, we've tracked internet fraud attempts for over six and a half years. I looked at a dataset from Bayonet, comprising more than 20 million online transactions spanning around five years and totaling more than US$800 million in online sales, to investigate the thesis that headlines this article.

Inflation. It is a fuzzy concept for many. Yet, it plays an important role in modern society. But what is it? Inflation refers to a general increase in the prices of goods and services in an economy. What causes such an increase? A reduction in the purchasing power of money. Why does the purchasing power of money decreases? Because of persistent excessive growth in the money supply. Who says this? Wikipedia

Every day, most of us go to work to earn money. Unless you live off the grid and cultivate and hunt your own food (I salute you if so). Money, and the conditions of the money supply influence our lives whether we like it or not.

Every new dollar (or Peso or Euro) introduced to the economy depreciates the value of the existing ones. The price of something is typically related to its scarcity. As a result, as something becomes less scarce, its value decreases.

Look at this graph from the Federal Reserve's website showing the US dollar money supply, which refers to the number of dollars in circulation and held by the public:

Something worth our attention:

I can’t help but wonder about the long-term implications of all that money printing. And about how radically high inflation correlates to the number or online frauds attempts companies using Bayonet’s service have got in the last couple of years: 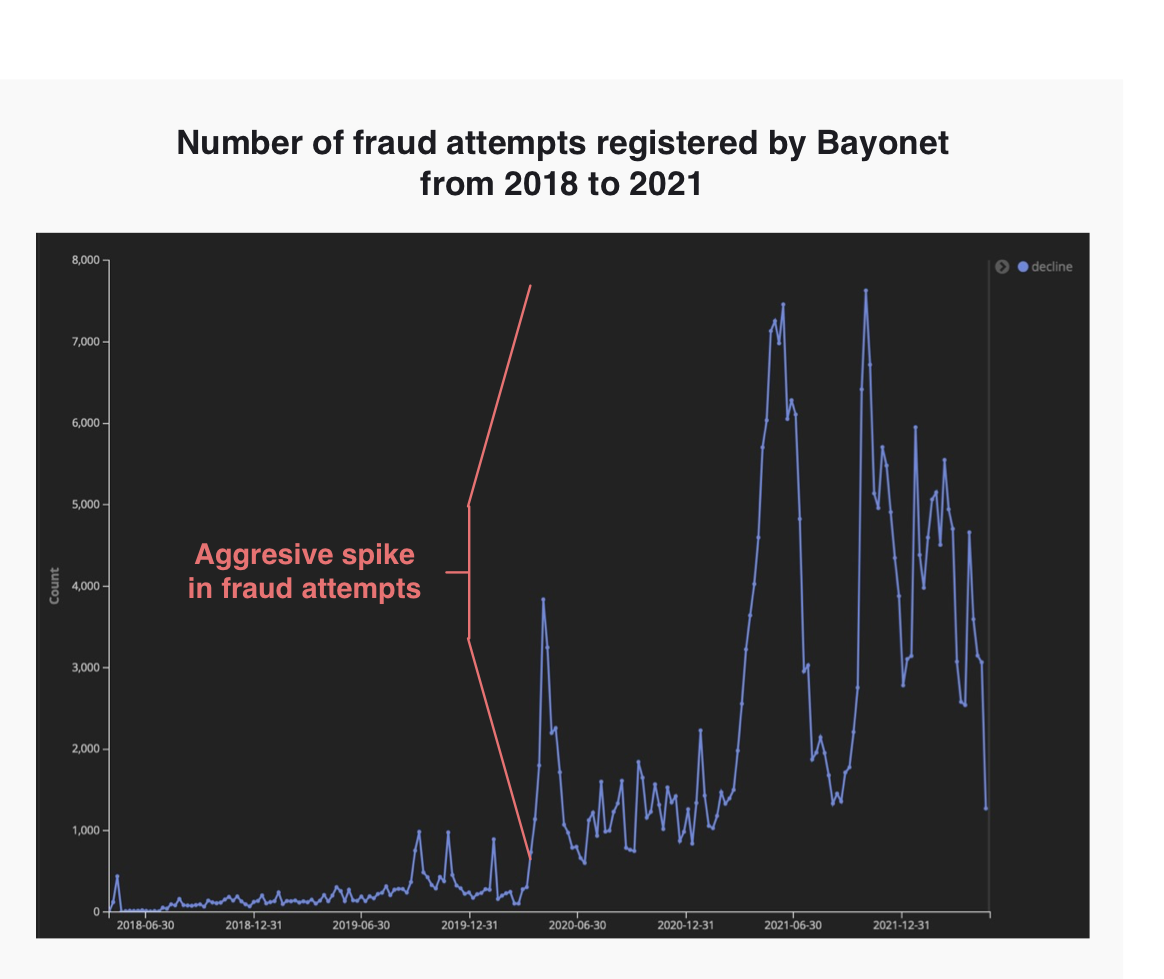 Let’s look at these facts:

Now, are these two graphs correlated?

Option A - Yes, because as the money supply grows, people lose purchasing power and economic activity slows, making it more difficult to earn a good living. As a result, more people turn to crime. Regardless of any global health crisis.

Option B - No, because online fraud increased due to a global health crisis, where unfavorable economic conditions corner people to crime. Or online fraud simply grew because the online economy did…

I lean towards option A because regardless of any pandemic, it doesn’t make sense to me for central banks to keep printing money indefinitely. Money started as a token to exchange goods or services. Trading an item -e.g., a car- for a different one -e.g., an avocado- is difficult.

Money is a token to make barters practical. Naturally, money should be pegged to the existing resources on earth, not growing four-fold in 2 years.

As a country’s money supply is increased, money becomes more affordable, consumers and companies obtain loans at lower interest rates, and more is spent in general. Then come big busts. Nature has cycles of boom and bust everywhere. Yes. But I believe, when it comes to economies, messing with the money supply creates messier boom and bust cycles. Like sugar rushes in humans, where spikes are high, and lows are lower.

These cycles of boom and bust come every 10 years or so. This chart from the United States Federal Reserve’s money supply chart from 1960 to 2022 shows recessions in gray shaded areas. 2008’s crisis came earlier and hit hard. 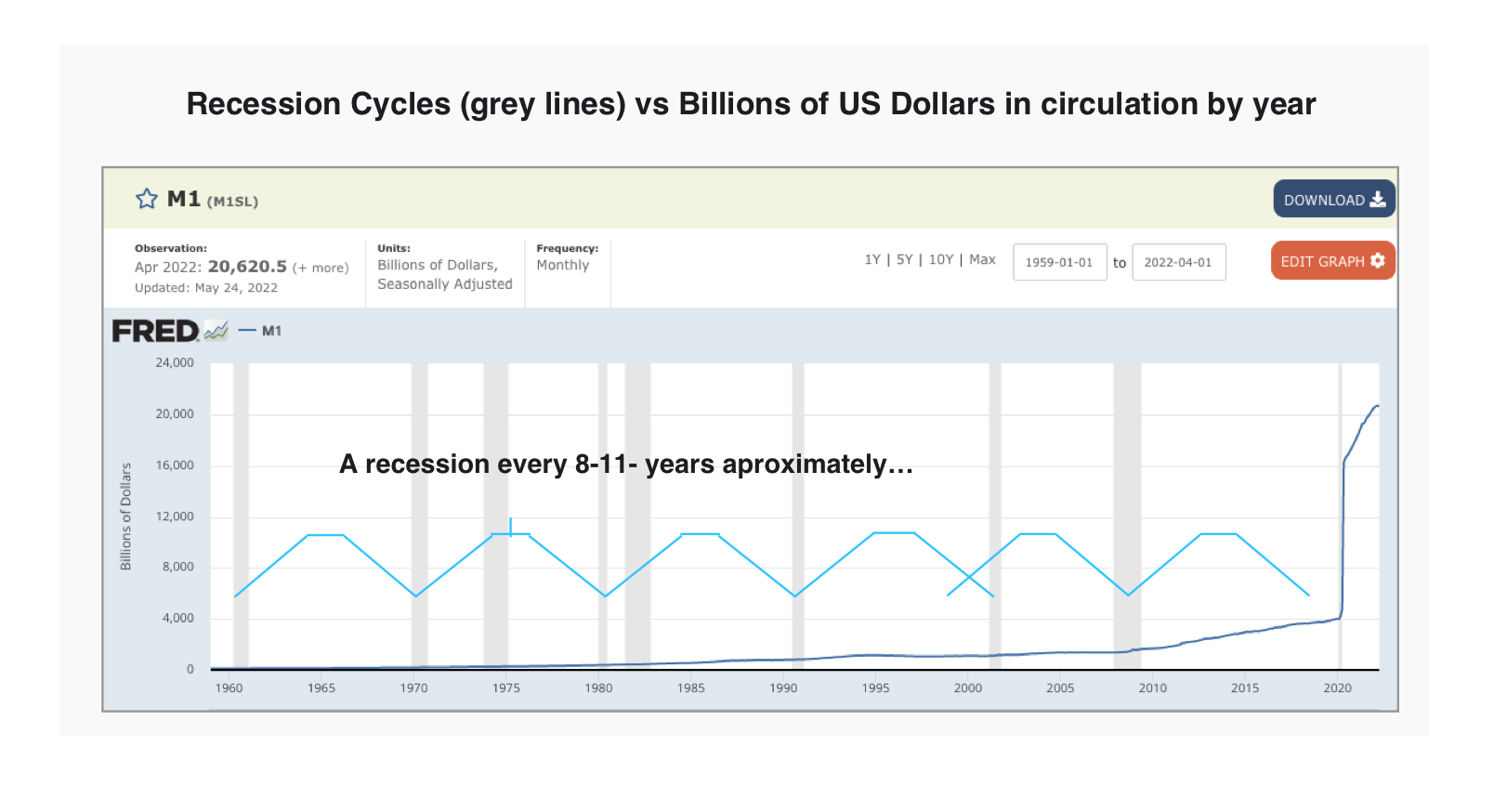 I think fraud and inflation spikes are correlated.

As inflation gets disproportionately high, economies follow unpleasant patterns where conditions are not favorable to people and leads higher fraud rates.

That’s why we’ve seen big spikes in fraud attempts at Bayonet that are aggressively higher compared to the growth in the online economy.

I’m curious to hear your thoughts about this at jose@bayonet.io