Over 30 years of experience shows that energy efficiency is the most abundant, cheapest and fastest approach to reducing greenhouse gases today. There is widespread access to the technology required to implement energy efficiency on a number of different scales, from households and cars to large office buildings and industrial facilities. An analysis of the cost of implementing energy efficiency measures, compared to clean energy sources, shows that most measures are cheaper and bring a faster return on investment. The goal of energy efficiency measures is to use less energy while allowing operations to continue unabated. The concept is often confused with energy conservation, in which the use of a particular service is reduced or suspended. Individuals, organizations, industries and businesses often engage in energy efficient practices to promote economic and environmental sustainability, in essence maximizing efficiency and minimizing costs.

The energy saving potential of energy efficiency solutions is vast, and ranges from individual domestic energy use to transportation systems for a wide range of industries. The energy sector itself also offers great potential for reducing energy transmission losses and fuel consumption in trucks, as well as energy losses during power generation processes, refining processes and hydrocarbon exploration and production. The International Organization for Standardization has created ISO 50001, a rating system that helps organizations reduce their energy consumption. Through this standard, companies can identify areas of opportunity for increasing efficiency, boosting competitiveness and improving their public image. However, because reducing these costs requires an initial investment that not everyone is willing to make, the power of public image provides an additional strategic incentive to persuade private and public entities to adopt energy efficient practices. It is also important to note that, in most cases, energy efficiency measures will pay for themselves over time in the form of lower energy bills. This is another element that can and should be used to persuade industries and businesses to pursue greater energy efficiency in their operations.

Energy efficiency policies led to a 1.7% annual decrease in global energy intensity between 1973 and 2009. It is estimated that the current energy demand would be 50% higher if these policies had not been implemented. Other projections claim that energy intensity will decrease 70% by 2035 if efficiency measures continue to develop and grow. This would also allow for a potential 69% decrease in CO2 emissions over the same period. These numbers were influential in the creation of Mexico’s National Energy Strategy (NES), which highlights the need to incorporate energy efficiency mechanisms that will foster economic growth, reduce energy losses throughout the production chain and enable users to choose more efficient utility services with less environmental impact.

Mexico has made significant advancements in fields such as lighting and electrical appliances, although an integrated transportation policy is still pending. Increased energy efficiency could have a substantial impact on the transportation sector because of fuel consumption levels and the prevalence of outdated equipment. An initial step would be to make a comparative assessment of transportation options that takes both efficiency and social benefits into account. The NES does set goals for this sector, aspiring to total energy savings of 280TWh per year, including 197.4TWh from gasoline and diesel in transportation and a reduction of 8% in the electricity loss rate. 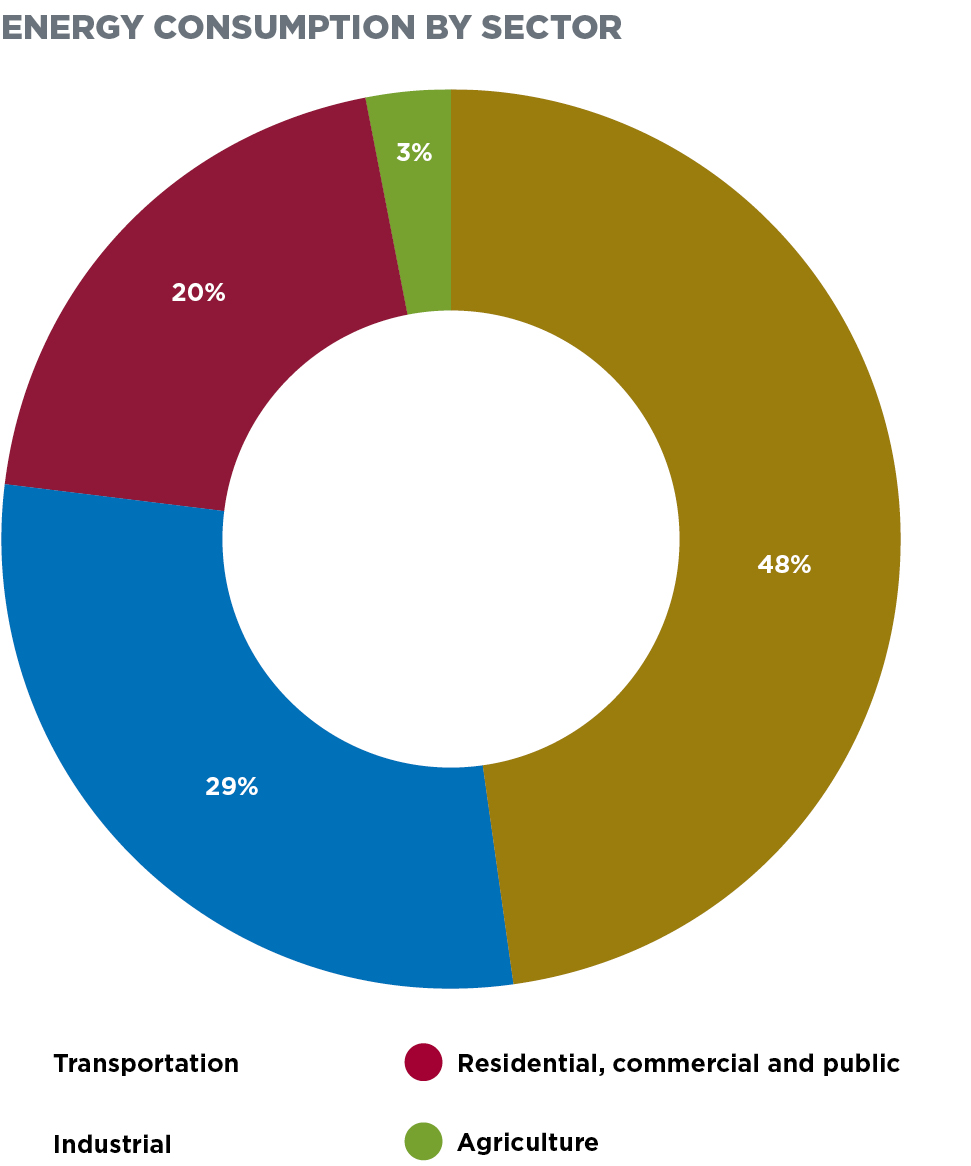 Professor Tim Green, of Imperial College in London, carried out a study on grid efficiency and concluded that losses in the grid during generation can account for between 45% and 55% of the total electricity generated, depending on the technology used. The negative impact non-technical energy losses have on utility companies is alarming. The NES traces most non-technical losses in Mexico back to illicit use, particularly in the low tension grid. These consequences are further aggravated by electricity theft, debt evasion, poor planning in household construction, irregular settlements, the expansion of the informal commercial sector and institutional deficiencies. The Mexican energy industry needs to mitigate this situation by increasing energy efficiency and availability, as well as improving the reliability of transmission and distribution systems. According to the NES, smart grid technology offers a solution for achieving these objectives, although critics point to the high costs of such technology.

The NES and the General Climate Change Law are influential components in overcoming structural barriers that hinder energy efficient practices, such as market and policy flaws. Regarding the former, poor or nonexistent standards contribute to irresponsible utility use. Similarly, insufficient financing schemes deter people and companies from adopting energy efficient technologies. Most public and corporate policies are aimed at expanding energy supply and increasing installed capacity instead of properly managing demand. Subsidies can also be detrimental, as they promote the inefficient use of power sources and ignore environmental consequences, in addition to benefiting privileged parties. In 2011, MX$87 billion (US$6.5 billion) was spent on electricity subsidies for the Mexican domestic sector, according to the Mario Molina Center. Needless to say, this economic burden could be eased by establishing promotional policies for energy efficiency. The optimal scenario would include the coordination of energy efficiency with increased production, to increase the efficiency and competitiveness of the electricity system and the country

Since 2008, the Mexican government has passed many norms that promote the implementation of energy management tools that are similar to ISO 50001. These are intended to seize energy saving opportunities in the largest electricity consuming sectors. The Mexican government heads this list, accounting for 38% of national energy consumption. Because energy efficiency is a fundamental component of sustainable economic development, the NES addresses topics that go beyond encouraging responsible energy use or implementing efficient technologies in houses and offices. Some of its goals include expanding and unifying national transportation networks and fuel storage facilities, as well as improving electricity distribution. 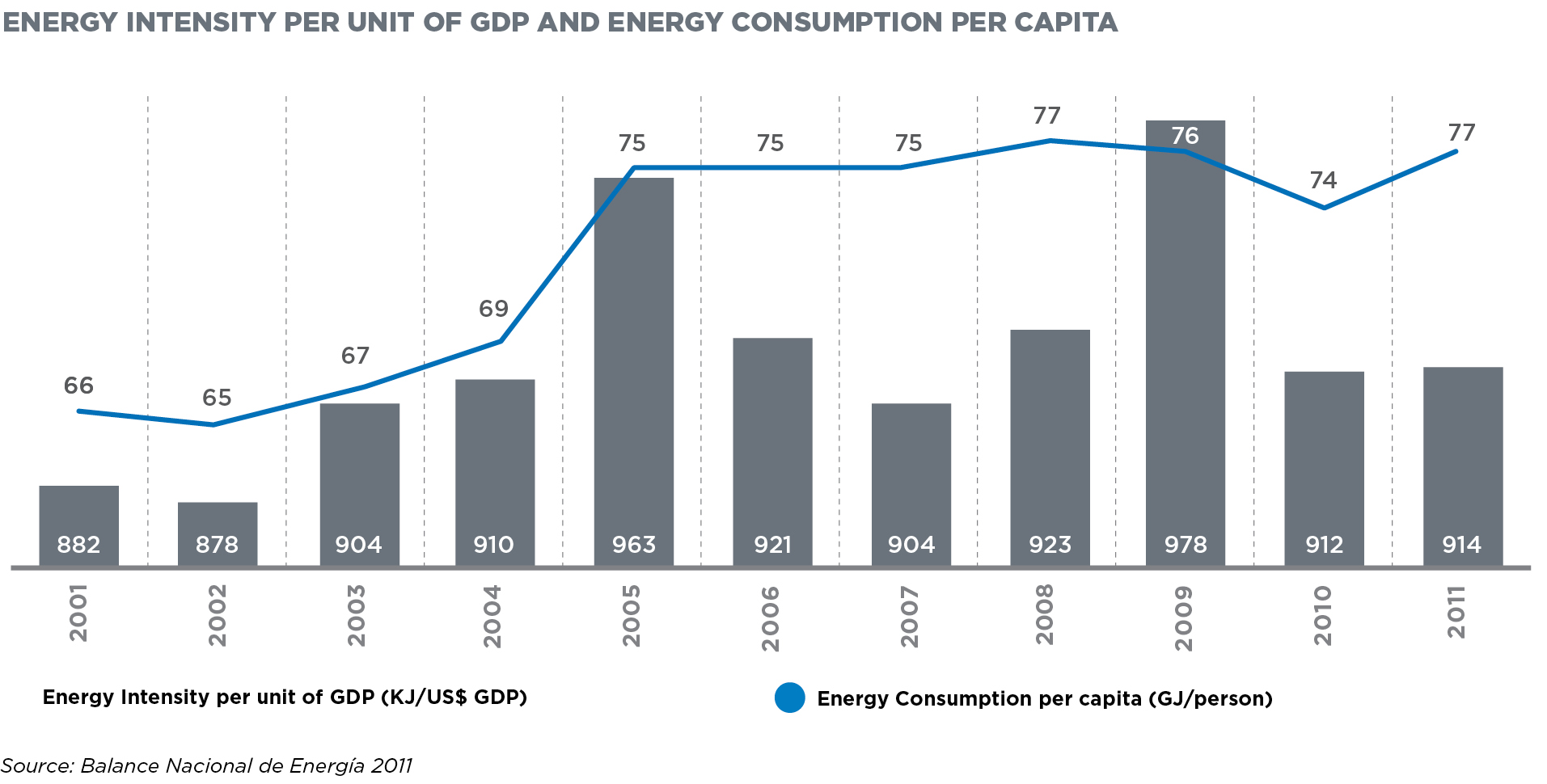