The Energy Reform has profoundly transformed the Mexican electricity industry, reshaping the way power will be generated, transmitted, distributed and sold in the coming decades. There is no turning back. “The changes made in the electricity sector are irreversible at this point,” says César Hernández, Deputy Minister of Electricity. “The process is so advanced that it would be more difficult to stop it than to go forward.”

The new mechanisms introduced by the reform along with the technological changes that have lowered solar and wind energy prices to record lows are likely to boost clean energy production in Mexico beyond pre-reform forecasts. The first two long-term power auctions held by CENACE were qualified as a success by major international and local players and the Ministry of Energy has announced a third auction to take place most probably in the first half of 2017. The third auction has not only triggered great expectations among power producers but also from qualified suppliers as the Ministry of Energy revealed that private companies can participate as purchasers.

In the PRODESEN 2016-2030, the government forecasts that solar technologies – PV and thermal – will account for 4 percent of the country’s total installed capacity in 2021 and 6 percent in 2030. The estimations, however, might be considered conservative as the industry expects solar costs to continue decreasing toward 2030, mainly driven by falling BoP costs and economies of scale in addition to Mexico’s solar irradiation, which is among the most attractive in the world. By 2014 solar energy accounted for only 0.07 percent of the total capacity installed.

Wind energy stayed out of the spotlight throughout 2016 but it continues to be the second largest renewable energy source in the country, just after hydropower and, judging by PRODESEN 2016-2030, the government expects it to hold its position, accounting for 14 percent of the total installed capacity in the country in 2030. Even though falling wind energy costs will not be as impressive as in solar technologies, it will still be favorable for furthering wind power development in the future. According to a report from Bloomberg New Energy Finance, installation costs for wind farms are expected to drop to MX$22.4 million/MW from MX$30.5 million/MW in the next 15 years.

Mexico also is ranked among the six largest producers of geothermal energy in the world, accounting for 7.1 percent of the total capacity installed globally. The awarding of the first exploration permits to private companies in 2015 and 2016 together with the creation of a risk mitigation fund to support geothermal projects is likely to increase the number of these power plants in the country. But the high capital costs and risks involved in the first stages of development continue to be a constraint for the further growth of this resource. With this in mind, the Mexican government expects geothermal to keep contributing around 2 percent of the total electricity generated in the country.

The sleeping giant of 2016 was hydropower, with little movement observed in this segment. Hydropower plants, nonetheless, hold the crown as the largest renewable energy source in Mexico, accounting for 18 percent of the total capacity installed in 2015. Although some growth is expected in the next 15 years, the sector will continue to move more slowly than its solar and wind counterparts, closing the gap to 2 percent between the amount of wind and hydropower capacity installed in 2030.

Together with rising renewable energy capacity, natural gas-based facilities are also projected to bloom within the national energy system. Mexico’s reliance on natural gas has its foundations on a cheap cost environment and the fact that natural gas is far less a pollutant than fuel oil and coal, both formerly widespread power generation fuels. But some industry players wonder how long natural gas costs will remain low. The US Energy Information Administration has projected an increase in the Henry Hub natural gas spot price, which is expected to rise from an average of US$2.49/MMBtu in 2016 to US$3.27/MMBtu, underpinned by growing demand in the US and higher exports to Mexico.

Around 70 percent of Mexico’s natural gas imports comes from its northern neighbor. It is not surprising then that Mexico became the top destination for US natural gas in 2015 as it imported 1,054,271mcf, surpassing Canada’s numbers. Due to the close relationship between the markets, the political changes taking place in the US will have strong repercussions in natural gas-based industries, which include manufacturers, PEMEX, CFE and other power producers. The support of US President Donald Trump for the domestic hydrocarbons industry will likely result in increased production, dragging prices down. But the president’s protectionist strategy also raises fears about new trading barriers on exports to Mexico.

“Both countries have deeply interconnected markets and decisions on one side of the Rio Bravo might have a huge impact on the other,” says José Prado, Partner at Holland & Knight. “The new US administration has, for instance, demonstrated low support in terms of renewable energies, preferring to empower the local oil and gas industries. This might lead US renewable energy companies to look south and to try to enter Mexico's market more aggressively. Another big question is how much this new political scenario will impact on oil and natural gas prices, a fuel the Mexican government has promoted in the energy sector.”

Under this uncertain scenario, some in the industry worry about losing US natural gas supply – the cheapest fuel in the world – while others worry about losing some of their best clients. Time, however, will show which way the wind blows.

TALENT SHORTAGE ON THE HORIZON

With all the changes expected to take place in the country’s energy industry, one of the major questions is whether or not the national market has enough prepared professionals to implement them. Mexico has a population of over 120 million people, half of whom are 27 years old or less. Moreover, around 100,000 engineers and technicians graduate every year from Mexican institutions. So, why worry?

The electricity industry has not faced a real talent gap problem yet, but that is expected to change as more companies enter the Mexican market and new projects take place as a result of the shifting dynamics. In 2015, demand for hiring specialized engineers grew 30 percent in the industrial sector according to Michael Page, a specialized consultancy in human resources, and the power segment is not the only industry driving this trend. Electricity companies have to strengthening their strategies to attract and retain talent because they have to compete against the country’s other buoyant industries such as the automotive and the oil and gas sectors.

A share of the experienced workforce in the electricity industry is also reaching retirement age and companies are finding fewer young engineers with the capabilities and skills needed to tackle the industry’s challenges. According to Juan Vargas, Senior Manager at Deloitte, part of the problem is that “the educational offerings of Mexico’s most important universities are generic and have not considered programs on new trends and specific abilities needed in the energy industry.” Mexican institutions are urged to reshape their programs so students are better prepared to meet the needs of a dynamic industry that will require 16,230 new employees just in the power generation sector.

The government’s efforts to ensure the gap is filled quickly include an ambitious scholarship program for energyrelated studies offered by CONACYT and the Ministry of Energy as well as an initiative to widen the reach of the Energy Reform to professionals in other sectors, including a set of Massive Online Open Courses (MOOCs) developed by the Tecnológico de Monterrey, a flagship Mexican university for technological studies.

Other important areas where Mexico needs to double its efforts are R&D and entrepreneurship. The country ranks low in both indicators compared with other OECD countries. It has already mastered the maquiladora business and several sources agree that becoming an innovation hub might be the next step in Mexico’s growth from an emerging to a developed economy. Renewable energies are considered innovative by nature and Mexico has already taken great steps toward boosting local technological development in this area by creating five Mexican Centers of Innovation (CEMIEs) focusing on solar, wind, biomass, geothermal and maritime energy, plus one in smart grid development. The six CEMIEs received a total of MX$3.726 billion from public and private funds and are expected to serve as a bridge between academia, the industry and the government. 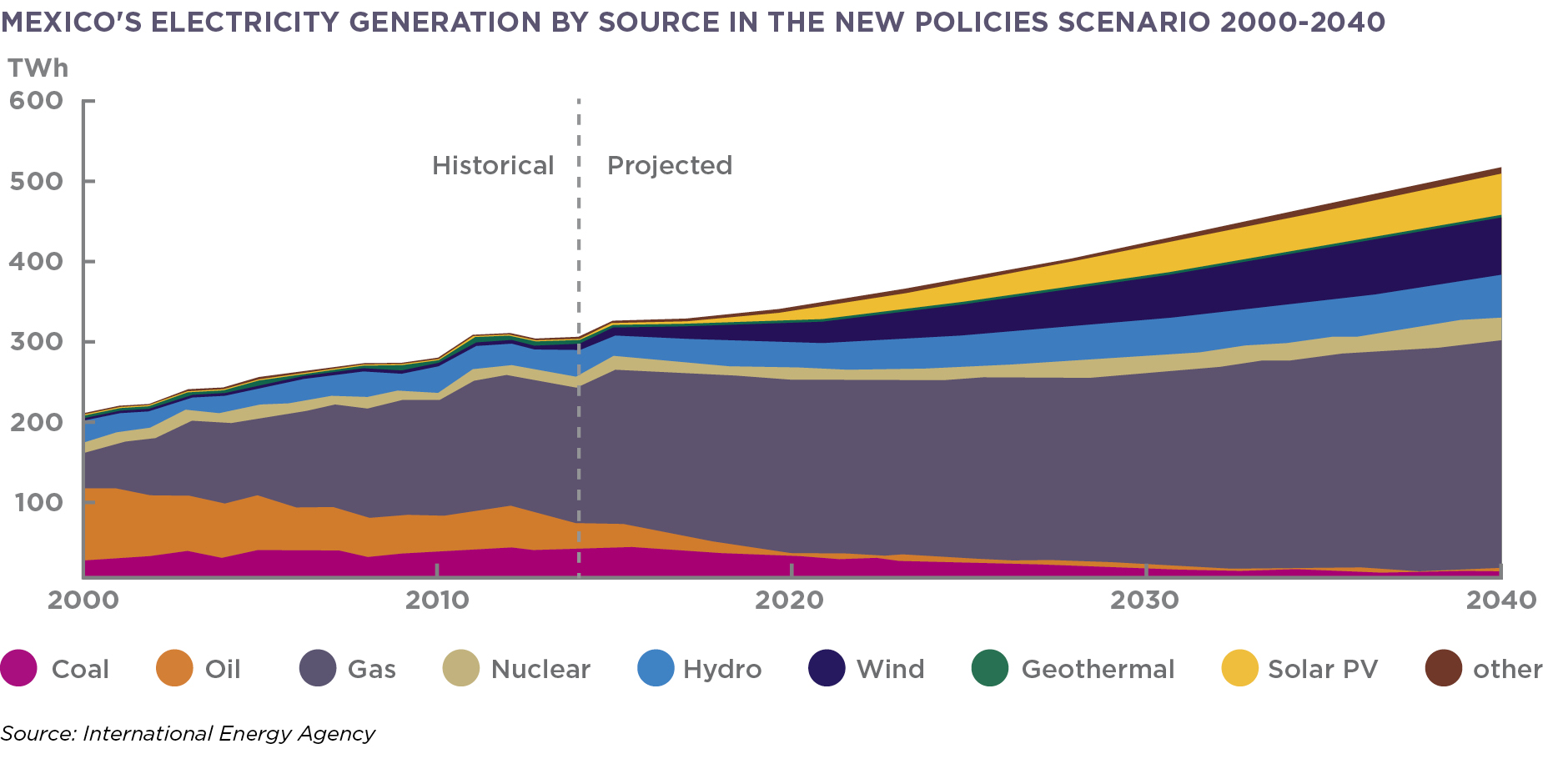