A Leading Global Position in the Cosmetic Market

Complementing the mainstream healthcare sector both in terms of production and generation of employment, the beauty industry encompasses cosmetics, personal care, and OTC products. There are, however, notable differences in the barriers to entry for each sector. The cosmetics sector is subject to fewer regulations than the traditional pharmaceutical industry, and consequently it is easier for companies based in Mexico to represent foreign brands. This has resulted in a thriving market. In 2014, Mexican exports of cosmetics and personal care products totaled US$3.8 billion while imports amounted to approximately US$1.9 billion. Mexico is the largest exporter of such products in Latin America, and currently exports more than the rest of the region combined. The value of the Mexican market for beauty products is estimated to be US$10 billion, positioning the industry in 10th place globally. Mexico has a competitive advantage in certain areas of the market over countries that do not benefit from the same proximity to the US. The cosmetic surgery and dermocosmetics industries have grown rapidly, especially in Mexico’s northern states, and both offer attractive business opportunities from an investment perspective. For example, in contrast to ten years ago, all the major players for dermal fillers now have a presence in Mexico. Besides Mexico’s proximity to the US, two significant global trends have been catalysts for growth. An increased consumer awareness of the impact of sun exposure has resulted in a 50% rise in sales of solar protection between 2008 and 2013, and the masculine personal care segment has registered a 36% growth over five years. Carlos Berzunza, Director General of CANIPEC, a not for profit organization joining the National Chamber of the Cosmetics Products Industry, and the National Association of Personal Care and Home Products Industry, emphasizes the male cosmetic market as a significant growth opportunity, especially in countries like Mexico with large populations. The entry of more women into the Mexican labor force is resulting in a general rise in income per household. In 2013, the skin-care and hair-care segments grew 8%, while dermatological products grew 6% reaching MX$4.4 billion. This growth rate exceeded the growth of the overall pharmaceutical market, but dropped in 2014 with consumers restraining their spending on beauty products and other markets due to increased taxes on some food products and beverages. 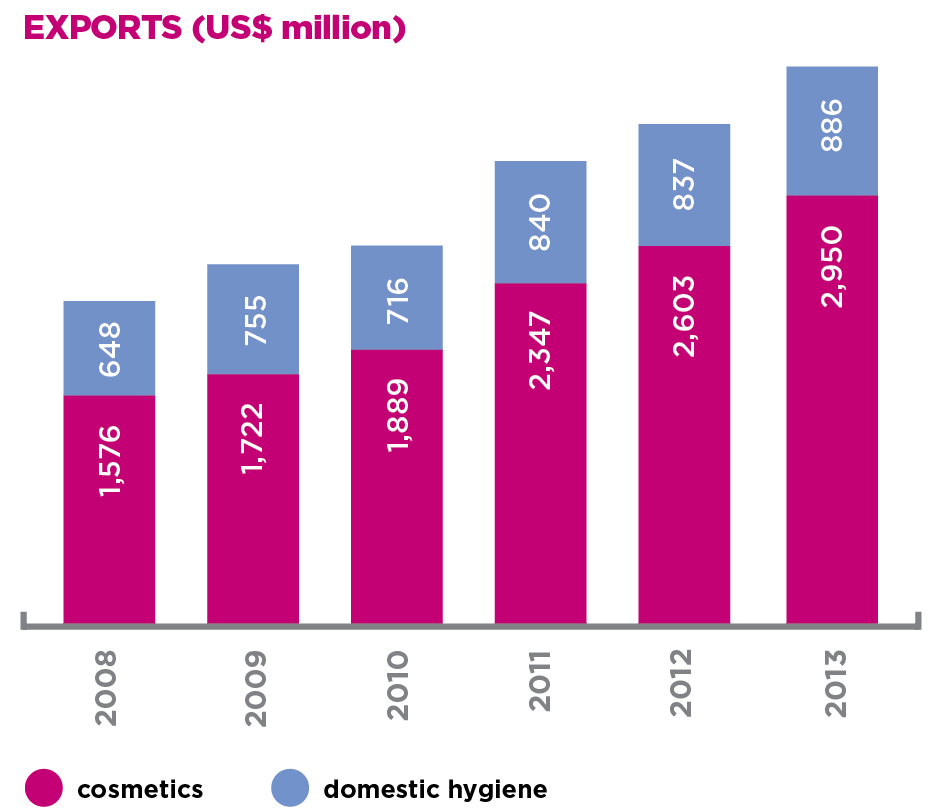 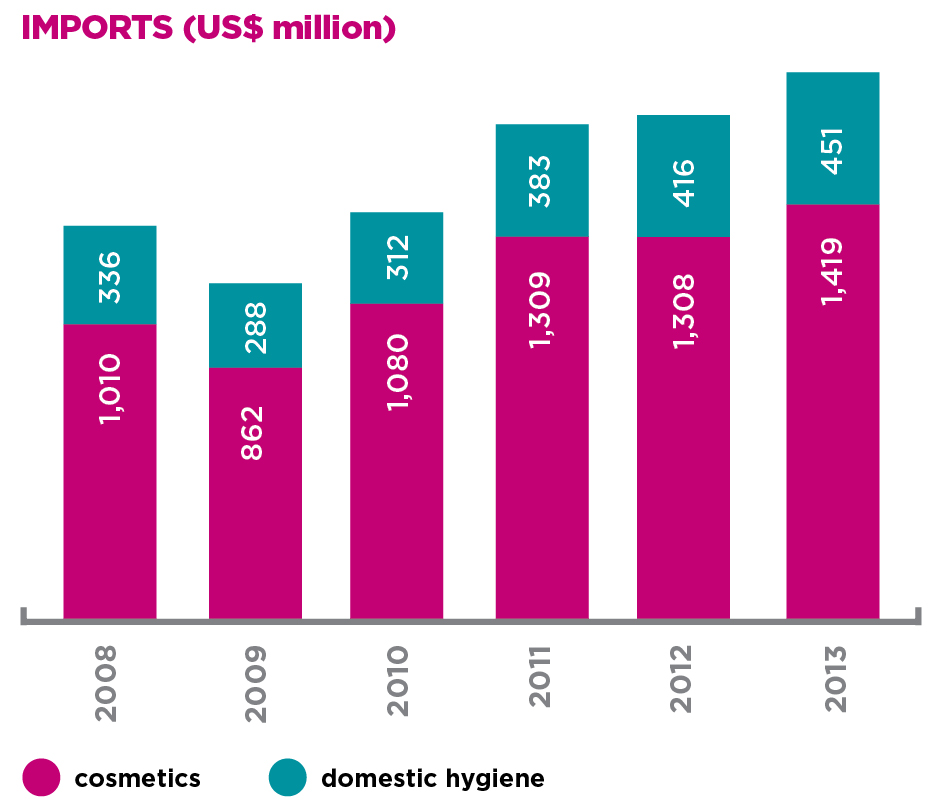 CANIPEC represents 80% of the companies in the formal national market, which are estimated to generate more than 300,000 direct and indirect jobs, contributing 1.2% to national GDP in 2014 and this percentage is increasing, seeing 14% growth over five years. Most CANIPEC affiliates produce personal care or home care products, but the organization also works with companies that provide raw materials, assembly plants, traders, and manufacturers of own label goods. Despite the challenging economic conditions experienced in 2009, CANIPEC reported stability in the cosmetic sector. Investments made during this year led to an increase in production capacity, mainly for exports, meaning Mexico continued to offer attractive investment opportunities. Foreign direct investment in the cosmetics industry over the last nine years averaged US$300 million per year.

As for aesthetic and cosmetic procedures, Mexico had 1,550 plastic surgeons in 2014 providing 706,072 procedures, including nonsurgical treatments like botulinum toxin and hyaluronic acid injections, and surgical ones such as liposuction, rhinoplasty, among many others, as reported by the International Society of Aesthetic Plastic Surgery (ISAPS). Companies that form part of CANIPEC follow a Code of Self-Regulation and Advertising Ethics for Cosmetic Products and Homecare Products (COSMEP) which incorporates 19 principles such as legality, veracity, honesty, fair competition, respect, dignity and comparative advertising.

An area in which some experts have identified key opportunities are those specialties where differentiated solutions can be introduced, particularly in the field of therapeutic cosmetics. Ricardo Spinola, CEO of Farmapiel, a local dermatological company, is focusing on this area for that very reason. “We see clinical dermatology as our key segment, including the provision of products that are required by physicians, dermatologists, and specialists. Plastic surgeons and medical professionals are a good example of our key customer base,” explains Spinola. In response to some of the main general trends in the industry, Farmapiel is focusing on suncare lines and affiliated products as well as therapeutic treatments for scarring.

The use of phytochemicals as active ingredients within dermatological lines is also on the rise, and while European consumers have set the precedent for consumption of products containing these ingredients, Mexico has a preColumbian tradition of using plants as medicine. Many research centers in Mexican Universities are interested in this field and companies like Pierre Fabre are importing lines to Mexico. The ingredients derived from plants used by researchers are the result of combining chemistry, chemical taxonomy, epidemiology, high-throughput screening, as well as original observations or proposals from external partners, and require specialist knowledge, which the Mexican labor force is able to offer. “There are many excellent products in the market place that have a natural source, including aspirin, and these products should not be disregarded or minimized because of their origins. When it comes to phytopharmaceuticals, they must have and prove the highest standards of manufacture and quality processes,” explains Pierre Fabre’s Director General for Mexico and Central America Karel Fucikovsky. 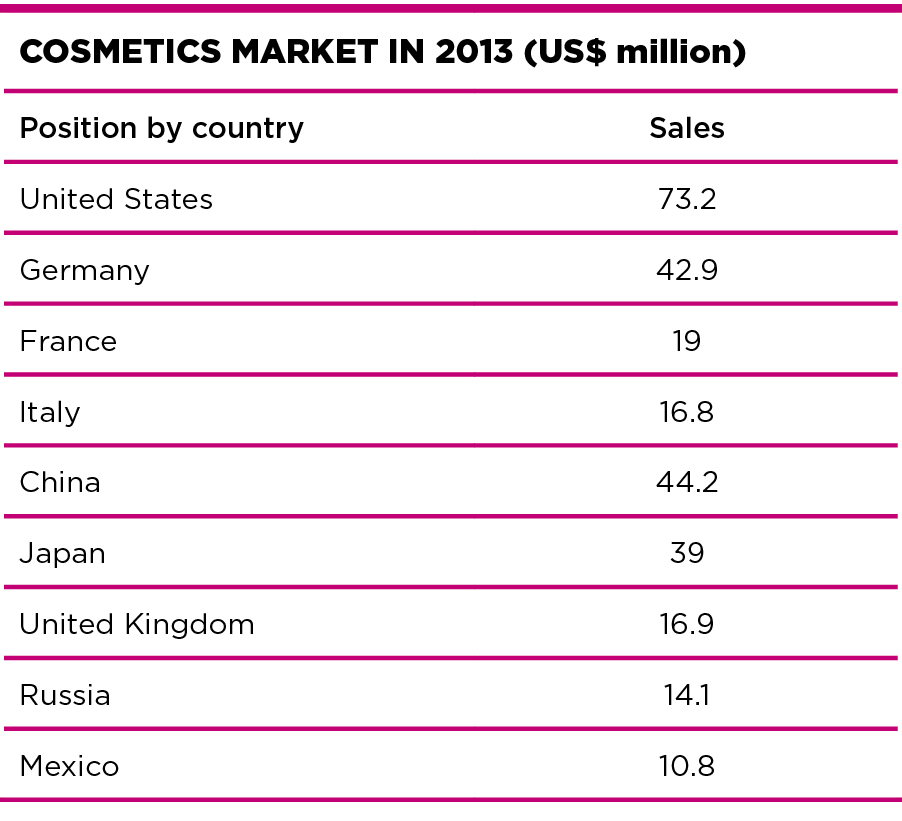