Out of some 1,000 prospects, on average only one will become a mine, according to CAMIMEX. Considering the risks and capital involved, mining jurisdictions are competing for investors and companies to guarantee the future of the industry.

The future of the mining industry is largely regarded as exploration. But a collection of factors in recent years have combined to create the perfect storm and Mexico is no longer regarded as the attractive destination for investment it once was. CAMIMEX reports that, by the end of 2016, there were 25,652 active mining concessions in Mexico, representing a total of 22.1 million ha, compared to the 26,002 active concessions in 2013, equaling 29.8 million hectares.

This reduction in allocations can be explained by a number of factors. Firstly, the 2014 fiscal reforms introduced a clause whereby pre-operative exploration expenses are no longer deductible in the same year they are made; instead operators must wait 10 years before they can reclaim these expenses. Another contributory factor that coincided with the reforms was the fall in metals prices. Exploration budgets were the first expenses to be slashed.

But one of the industry’s biggest complaints is about the delay in obtaining the mining concessions required to carry out exploration work. As metals prices slowly work their way upward, appetite for investment is returning, but with the significant delays involved in obtaining the property rights, many explorers are beginning to set their sights abroad.

According to Sergio Almazán, Director General of Mexican mining chamber CAMIMEX, with a lack of exploration, “there will be less investment in the country, which will mean there are fewer mining operations that begin production. This in turn will mean fewer jobs and less money in taxes. There will be a cycle whereby the negative impacts will continue worsening.” is greatly slowing down the development of exploration. “The country needs a more organized system,” he says. “If land claims were more accessible and transparent, there would be many points of interests toward which Millrock Resources would gladly direct exploration capital.”

James McDonald, CEO of Kootenay Silver, adds that the company is running into significant problems with the process of application and granting of mining concessions by the government. He attributes this in part to the Energy Reform, which has also drawn stark comparisons between the importance placed on the hydrocarbons and mining industries, despite the latter’s 3.9 percent contribution to national GDP. “The new energy law placed a priority on hydrocarbons in Mexico over all other assets,” McDonald says. “This has created a barrier to mining in large areas across Mexico and significant parts of the country that are not being tested or utilized and because claim applications are not being granted, the government is missing out on taxes for these concessions.”

Mining concession holders have three main duties: pay fees, royalties and taxes accordingly, produce and file periodic reports and perform certain works on the mining concessions. Otherwise, the mining concession are at risk of cancelation. When this happens, according to Alain Charest, Exploration Vice President of Evrim Resources, the concessions effectively default and become tangled in a long bureaucratic process, remaining dormant until the respective authorities free them and offer them to the public.

“Today, there are thousands of canceled mineral concessions that have accumulated over the past 25 years or so, an outrageous amount of mineral property that has not been made available for acquisition by the public,” says Charest. “Many of our exploration target areas are discarded or put on hold because of the non-availability of mineral concessions.” Federal Auditor ASF states that between 2001 and 2015, out of 33,791 concessions that were registered since the year 1900, 8,462 were canceled.

into other jurisdictions, such as Brazil. “We are driven by passion but sometimes the challenges feel insurmountable,” says John Mark Staude, President and CEO of exploration company Riverside Resources. He says the lack of liberation of claims caused an outflow of foreign capital from Mexico, which led Riverside to lose two-thirds of its partners, US$11 million in potential alliance money and over US$200 million in potential JV money in the last four years. “We had the money lined up and the commitment in place but the pace of permitting, granting titles and liberations meant that, as the market decelerated, the money went elsewhere,” says Staude.

The government is well aware of the unrest related to mining concession delays, and operators even admit that the General Coordination of Mining was overwhelmed and understaffed for too long. But many hope that with the creation of the new mining Undersecretariat in December 2016, the sector is finally receiving the resources it desperately needs to keep abreast of the concessioning process.

The Undersecretary himself, Mario Alfonso Cantú, acknowledges the shortcomings of the system and has announced he will prioritize allocation of mining concessions in the remaining year of the administration. “In accordance with one of the primary objectives of the Mining Development Program, we have been working to implement technological tools to reduce costs, streamline service procedures and provide a more efficient service to users,” he says. “We are working on modernizing our technological platform and digitalizing all the concession process and cartography, meaning we will be able to reduce the number of days taken to issue a concession title.” The Digital Government Integrated Platform will allow the government to accelerate procedures through faster digital reception of requests.

Ildefonso Guajardo Villarreal, Mexico's Minister of Economy, adds that the Undersecretariat is equally prioritizing key areas to promote the acceleration of concessions. These include the strengthening of human resources within his department, the re-engagement of Mexican Geological Survey (SGM) resources toward exploration activities and the reinforcement of the Inter-Institutional Mining Group, made up of federal government agencies involved in regulating the sector to modernize the country’s industry.

Mining jurisdictions around the world, and in Latin America especially, are actively competing to attract global capital. The mining cycle is finally beginning to take a turn for the better, and if Mexico is to remain competitive and take advantage of the upturn, companies must be able to replenish their mining portfolios with new exploration projects in Mexico through the acquisition of mining concessions. The context is particularly urgent considering the global deficit in mining projects and the growing demand of a projected global population of 9 billion by 2050.

Despite the situation, companies like Millrock Resources consider Mexico to have many areas of opportunities in terms of exploration and are eager to see the results of their investments. “Early stage exploration may have the highest risk but it also has the highest potential,” states Beischer. And Mexico in particular holds great promise for several explorers. According to Ben Whiting, Vice President of Exploration at Orex Minerals, “Mexico is in the top 10 in the world when it comes to the competitiveness of its mining sector.”

Mexico’s exploration investment dropped significantly to US$401 million in 2016, down US$90 million from 2015 and US$831 million less than in 2012. Now, it seems that the government is taking steps to solve policy issues that are seen contributing to the country’s reduced attractiveness. “The mining law in Mexico is good, albeit a little outdated, but the most important thing is that we have committed, experienced public officials who are passionate about the industry,” says Alberto Vazquez, Senior Partner at VHG Abogados. 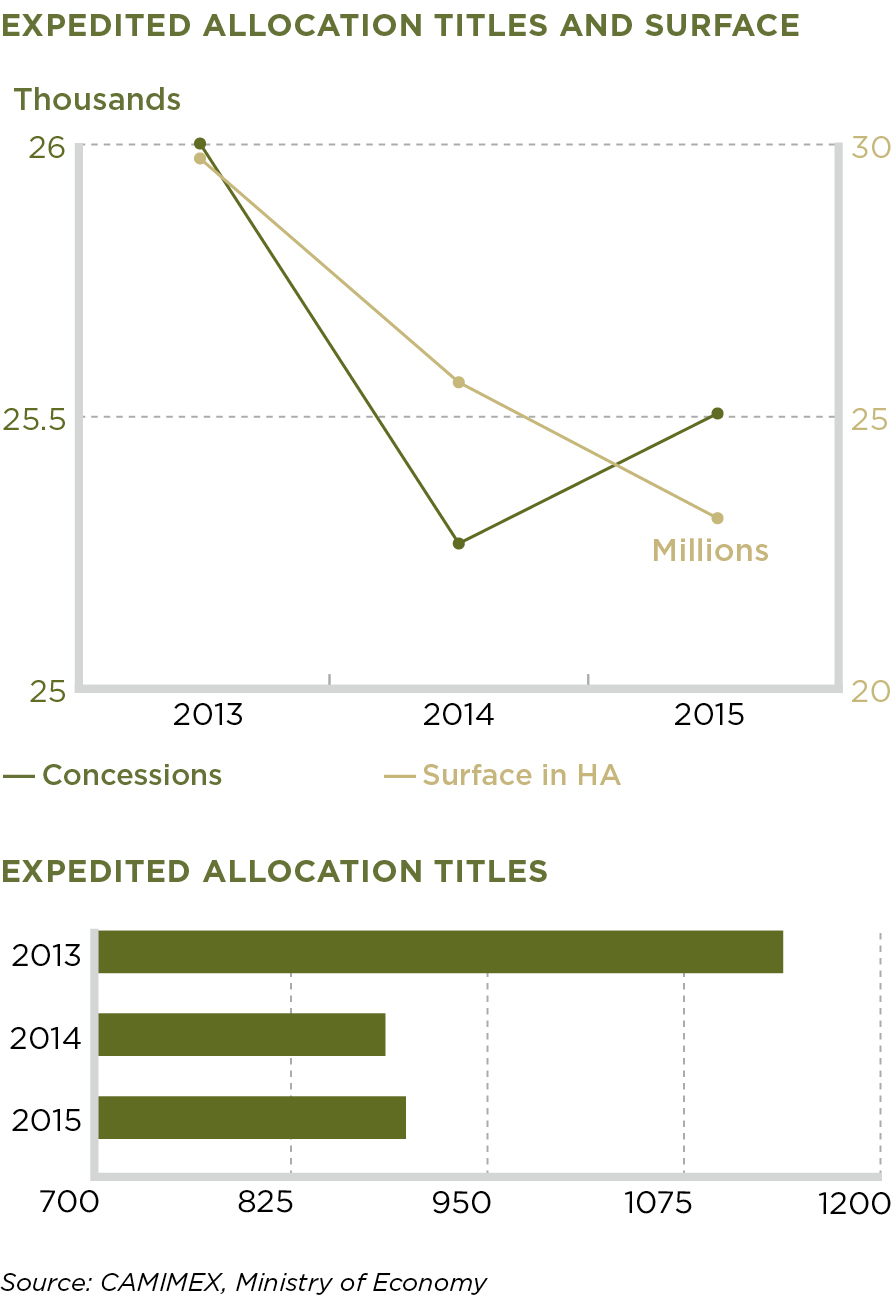