Mexico’s low-cost manufacturing approach has prevented the industry from identifying the country with strong technology-development capabilities. But localized efforts, fueled by relationships between the government, private companies and academia, are helping change this perception. The ITESM Toluca's Research Center for Automotive Mechatronics (CIMA) is proof of Mexico’s deep desire to participate in R&D, and to contribute to shaping the automotive industry’s future.

Located in the State of Mexico, CIMA has a strong relationship with the region’s automotive companies. MACIMEX was among the companies that sought the center’s collaboration when developing its technological capabilities for rapid prototyping solutions. The relationship has gone one step further and now CIMA is helping MACIMEX embrace Industry 4.0. “CIMA has evolved past its purely mechanical approach and we are now integrating its Industrial Engineering and Information Technologies departments in our projects. Our most recent development is focused on Big Data applications,” says Alejandro Rojo, Director of CIMA. “Thanks to our previous ventures with the MACIMEX team, we have generated enormous amounts of data that we now have to analyze to improve its manufacturing process and to make prototyping projects more efficient.”

Jesús González, Director General of the Industrial Engineering and Development Center (CIDESI), says the federal Innovation Stimuli Program (PEI) was cut by 30 percent in 2017, which Rojo says has dented the project’s funding. But he expects to receive new funds from the Treasury to support MACIMEX’s new initiative. The center’s reach is growing within the Automotive Cluster of the State of Mexico and it is now developing Sypris’ technology center, while training teachers and graduate students on the Toyota Production System (TPS) concept for lean manufacturing applications. “We want to become experts and help companies improve their processes by implementing TPS,” explains Rojo.

A flagship initiative began in 2015, when CIMA collaborated with the National Center of Research and Technological Development (CENIDET), the San Luis Potosi Institute of Scientific Investigation and Technology (IPICYT) and the University of San Luis Potosi to develop a fuel-cell commercial vehicle. The initiative aimed to show that the government and academia could work together to deliver a functional advanced-technology project. The project was finalized in 2016 and CIMA’s interest was piqued. Drawing from this previous experience, the center’s team saw an opportunity to delve into the world of electric vehicles, focusing on the design of powertrain and chassis improvements, as well as on the development of powertrain, batteries and electric motors performance- testing processes.

CIMA already had experience testing internal combustion engines but electric systems were new territory. To understand how big companies performed their own motor characterization, the center established a relationship with Tesla that also evolved into a more advantageous exchange. Starting in 2017, many students of ITESM’s undergraduate and graduate programs are now participating in academic exchanges directly in Tesla’s laboratories. “Students are becoming more interested in Automotive Design Engineering, partly because we involve them in real industry projects,” says Rojo.

Although Mexico seemed a long way from being able to participate in the electric vehicle race, CIMA’s developments and recent industry news changed the playing field.

Bread-making company Bimbo’s subsidiary Moldex had already worked on adapting some of its own vehicles to use electric technology, in collaboration with Giant Motors Latinoamérica. “The company had the technology to turn their trucks into electric vehicles but it was still using lead-acid batteries,” Rojo says. “Having started with our characterization project, we suggested Moldex use lithium-ion batteries and design trucks based on the company’s needs, with powertrains suited to routes and power requirements, rather than just replacing the engine and transmission.”

Arturo García, Director of Technical Development at Moldex, had already expressed the company’s goal to become one of the transport industry’s biggest electric vehicle suppliers in the long term. But the opportunity presented itself sooner than he thought. After the double No-Drive Day restrictions in Mexico City in 2016, the government launched an invitation for Mexican companies to become the first national electric vehicle manufacturers for taxi applications. Moldex announced its ambitions to participate in the tender. Together with CIMA, the company presented one of the three proposals that were analyzed by the federal government.

“We won the tender and now have to present three prototypes by October 2017,” says Rojo. “CIMA is designing the powertrain for these prototypes, choosing the best motor-battery configuration for a utility vehicle (taxi). We analyzed driving patterns and conditions of existing taxis, CIMA's laboratory in ITESM Toluca which showed us the size of the engine we need and the energy capacity it requires.”

CIMA’s efforts are constantly expanding and branching out to the automotive industry’s most advanced trends. In 2015, CIMA participated in an autonomous personal rapid transit project with ModuTram in Jalisco, on ModuTram’s development of the chassis, powertrain and coupling system for the monorail system. The center’s participation ended in 2016 once the project moved into the control and data communication phase. Today, the center is researching the development of high-energy density ultra-capacitors with the National Institute of Nuclear Research (ININ). ININ is using carbon nanotubes that will boost the components’ energy-storage capacity. The goal is to have a product that can be commercialized by 2019.

The center is knee-deep in electric technology research and Rojo believes it could promote Mexico to the next level in the industry. “Our analyses are crucial to developing electric-motor technology and designing complete powertrain systems in Mexico without depending on foreign companies or importers,” he says. Once electric vehicle production becomes a reality in Giant Motors’ production facility in Ciudad Sahagun, Hidalgo, demand for motors will surge for the 10,000 taxis that must be delivered by 2020. “This will also attract more suppliers that are focused on electric-vehicle technology and it will strengthen Mexico’s position as an automotive manufacturer,” Rojo says. 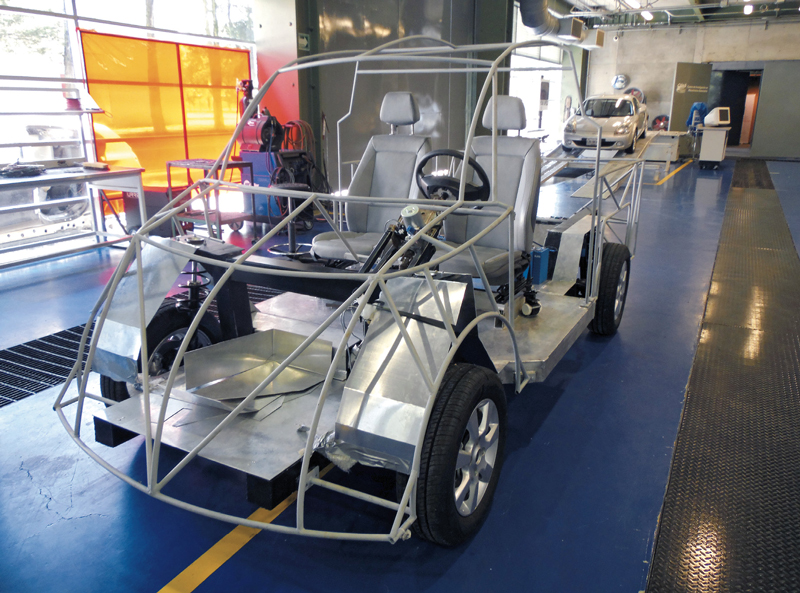