CENAGAS’ Five Year Plan includes more than 5,150km of pipelines related to projects mentioned in the National Infrastructure Plan. These are divided in three categories. The pipelines that transport natural gas from the north of the country to the central region are La LagunaAguascalientes, Los Ramones-Cempoala, Southern TexasTuxpan. The project is aimed at increasing supply capacity for the central region to compensate for fluctuations resulting from demand in the southeast, while providing redundancy to branches in this route.

The second category comprises pipelines that connect the Gulf and the western regions, which will alleviate congestion in ducts supplying the central and western regions, as well as providing redundancy in the supply for places with significant populations and economic activity. These include Tuxpan-Tula, Tula-Villa de Reyes, Villa de Reyes-Aguascalientes-Guadalajara.

The third class, pipelines that connect the system with new demand hubs, are meant to expand the system’s coverage in order to detonate new markets and contribute to their economic development. The projects included are Lázaro Cárdenas-Acapulco, Jáltipan-Salina Cruz, and Salina Cruz-Tapachula. The last set of projects will cover high-demand regions in Northern Mexico. The pipelines in this class are San Isidro-Samalayuca, Colombia-Escobedo, Salamayuca-Sásabe, and Eherenberg-Algodones-San Luis Rio Colorado.

The Ministry of Energy determined that the Lázaro Cárdenas-Acapulco and Salina Cruz-Tapachula pipelines are projects of social importance, and their development depends of the Ministry of Finance’s favorable opinion. It also deemed the following projects as strategic: ColombiaEscobedo, Jáltipan-Salina Cruz, Southern Texas-Tuxpan, Tuxpan-Tula, Tula-Villa de Reyes, Samalayuca-Sásabe, Los Ramones-Cempoala, Villa de Reyes-AguascalientesGuadalajara, and La Laguna-Aguascalientes. Finally, the Ministry of Energy has instructed PEMEX and CFE to launch tenders for the Colombia-Escobedo, Tuxpan-Tula, Samalayuca-Sásabe, and Jáltipan-Salina Cruz pipelines.

In order to determine the feasibility of the projects that CENAGAS proposed to address natural gas supply needs in its Five Year Plan, the technical system operator relied on CRE’s assistance to create a model that assessed the impact of the interconnection of those projects. The flow model considers the current state of the National Natural Gas Pipeline System as well as existing privately owned ducts that have an impact on the system’s conduction capacity. The effect of pressure and velocity variations in certain segments of the pipeline system have been simulated in the model, enabling the regulators to determine potential congestion points. 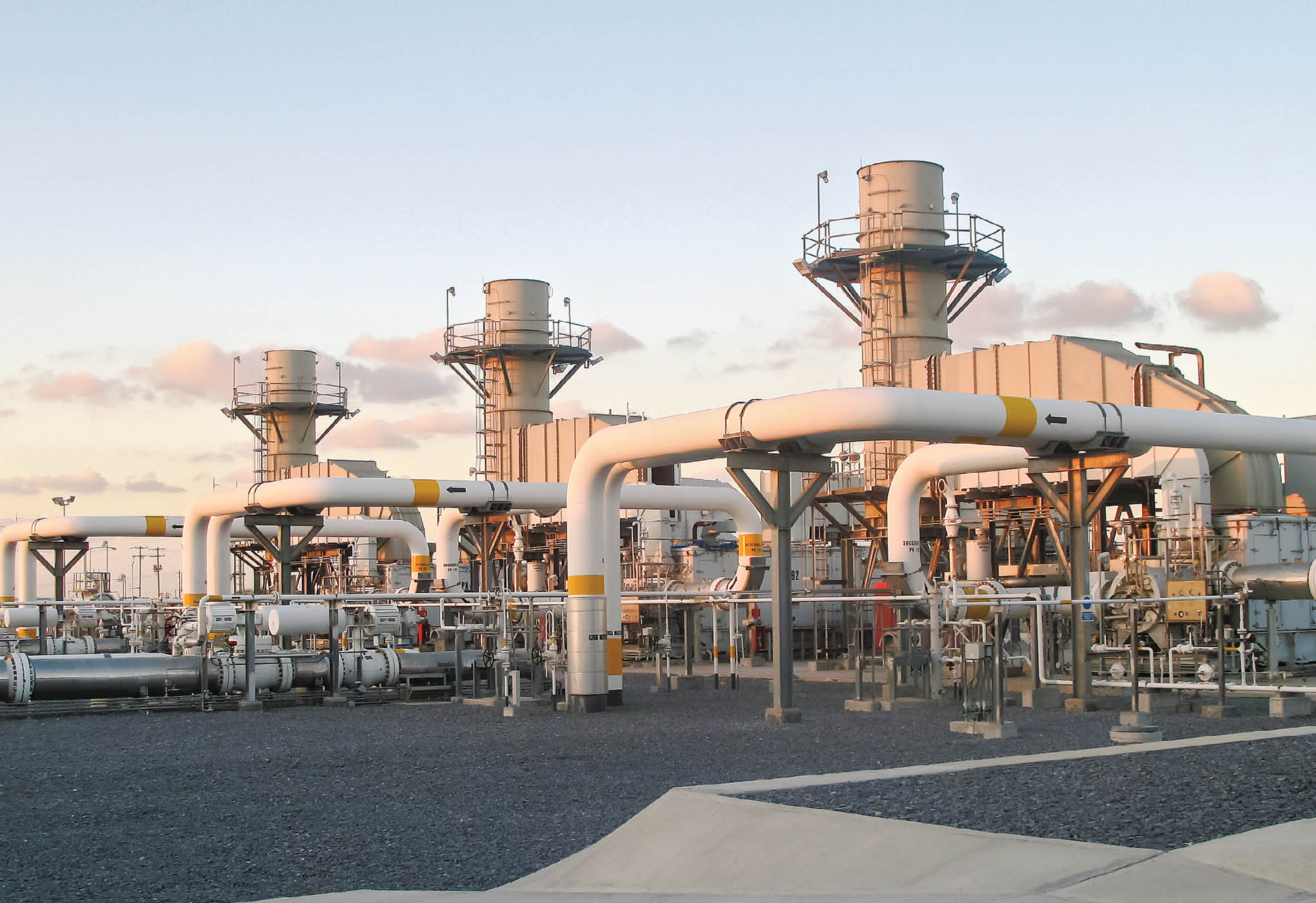 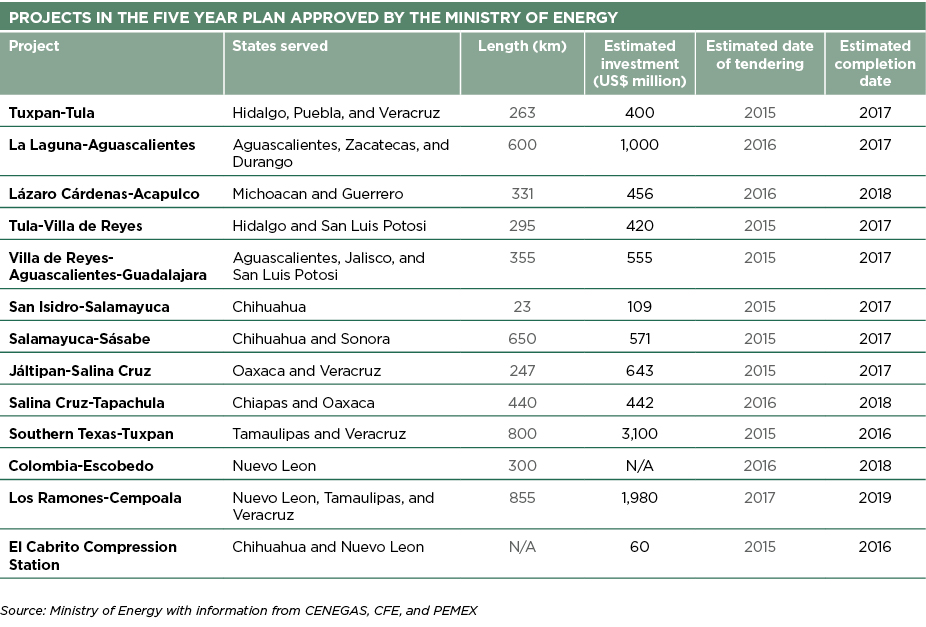 The results of this exercise led the authorities to conclude that if the system remains as it is today, it will be necessary to develop infrastructure to transport natural gas from the north of the country to the Gulf, central, and western tariff regions in the 2015-2020 period. Between 2016 and 2017, the capacity to import natural gas through pipelines has to be complemented with other options, such as importing LNG, in order to ensure stability in the system. If more pipelines are interconnected to the system before 2020, potential congestion will be reduced, supply will be diversified, and the system will be stable without the need to import LNG. However, the impact on tariffs will be significant.

The risk of destabilizing the system due to the time it will take for new projects to begin operations calls for reinforcement of the supply of imported natural gas, which is why the Colombia-Escobedo and Los RamonesCempoala projects have been reprogrammed. CFE participated in KM and Howard Midstream Energy Partners open season schemes in the US to transport natural gas from Webb County in Texas to Escobedo and Monterrey in Nuevo Leon. This endeavor is part of the ColombiaEscobedo project. After thoroughly evaluating both proposals, CFE decided Howard Midstream’s proposal had the most favorable technical and economic terms, as it represents savings of US$25 million.

The Ministry of Energy authorized the tendering of the Southern Texas-Tuxpan project, which will be launched by CFE. This project will ease demand from the Gulf section of the National Natural Gas Pipeline System and part of the demand estimated for the Los Ramones-Cempoala pipeline, ultimately saving US$7 billion. CFE published the bases for the tender on October 2015, and the project will ideally begin commercial operations in June 2018.

In August 2015, CFE issued the bidding bases for the Tula-Villa de Reyes and Villa de Reyes-AguascalientesGuadalajara pipelines, which are scheduled to start commercial operations in 2017. In September 2015, CFE launched the bases for the La Laguna-Aguascalientes pipeline and assigned the project to the consortium composed of Carso Electric and Promotora de Desarrollo de América Latina to provide natural gas transportation services through the Samalayuca-Sásabe pipeline.

CFE awarded the contract for the construction of the San Isidro-Samalayuca pipeline to Gasoductos de Agua Prieta, a subsidiary of IEnova, and operations are expected to start in 2018. The Tuxpan-Tula project was won by Transcanada in November 2015. In addition, CENAGAS included the El Cabrito compression station in its project pipeline, which will be located in Coahuila in order to increase natural gas transportation in the northern region. The Ministry of Energy assigned this project to PEMEX in July 2015.