During 1Q22, all major regions in Mexico benefited from the global trend to re-shore into the country. New industrial investments were completed by global operations across the board — in nearly every market. Through NAI Mexico’s Business Intelligence Unit and our 15 offices in Mexico, we can share a unique perspective regarding activity in every market, reported here with Mexico Business.

Lease Rates: Consequently, average asking lease rates across Mexico have risen. In 1Q21, they averaged US$0.42 per square foot monthly, and now stand at US$0.46 per square foot per month, a 9.52 percent increase.

Do Markets Favor Developers or Tenants?

Tier 1 markets at the US-Mexico border, Tijuana and Ciudad Juarez, and Mexico City, the country’s capital, are the markets commanding the highest asking lease rates, at US$0.64, US$0.57, and US$0.56 per square foot per month, respectively.

Developers in these markets are benefiting from historical low vacancies, escalating asking lease rates, and potential to prelease the majority of all new construction. As a result, owners are scrutinizing tenants’ sector and financial records prior to executing leases.

Even with the increases, total operating costs are still viewed as significantly less than in the US and other home markets. Mexico’s competitive advantage continues.

The Northwest, Northcentral and Central regions reflect the most leverage for developers, with low vacancy rates (1.05 percent, 1.65 percent, and 3.17 percent, respectively). On the contrary, the Northeast and Bajio regions offer a more balanced leverage between tenants and developers, with availability of 10.99 million square feet and 11.75 million square feet and reflecting average lease rates of US$0.44 and US$0.41 per square foot per month, respectively.

The largest transaction recorded during Q1 for Tijuana was the 300,000 square-foot facility lease by Foxconn. Construction also began for 17 small warehouses in Bodegas Alamar Park.

Monterrey still maintains a balanced inventory of available facilities. Bosch acquired a new campus site totaling 103 acres at Interpuertos in North Monterrey. This was the largest land transaction registered during the quarter.

In Mexico City, Mercado Libre signed its latest lease for a build to suit project for more than 1 million square feet.

During Q1, TECMA leased in Ciudad Juarez 637,000 square feet (four buildings), which are currently under construction.

Queretaro is the market with the third-highest square footage under construction, with 6.39 million square feet, only behind Mexico City and Monterrey. Martinrea Int. will invest US$155 million to expand its stamping operation in Queretaro during the next two years. During Q1, Bosch signed an expansion of 112,000 square feet.

The logistics sector is the main driver of growth in the Guadalajara market, with Amazon, Home Depot, Walmart and Mercado Libre each signing large transactions during the last 12 months. During 2021, Waldo’s also leased its 129,000 square feet distribution facility. 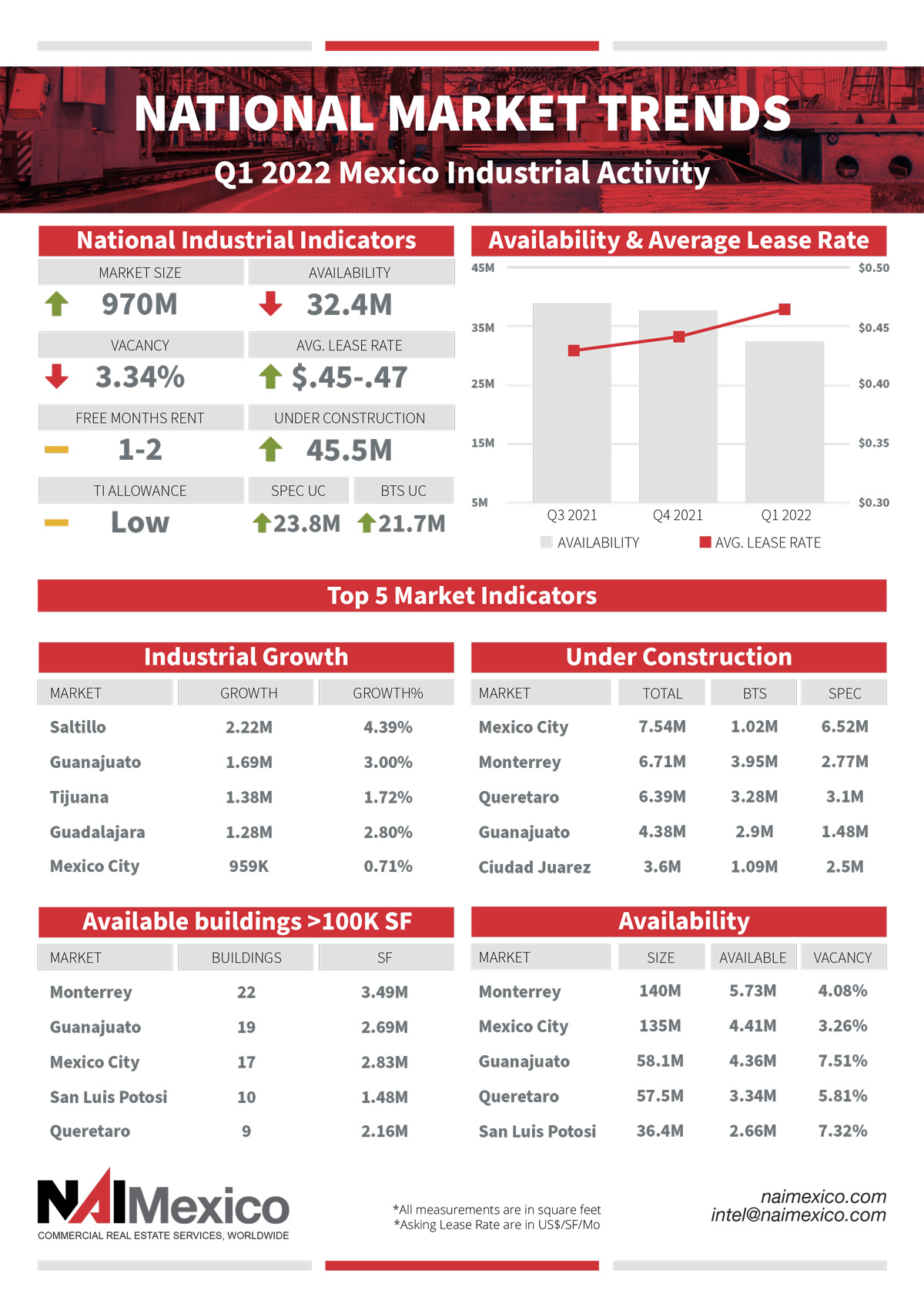