Iron is one of the most abundant elements in the earth’s crust conforming approximately 5.6% of its chemical composition. This element can be oxidized or reduced in superficial environments, serving as a potential oxidation indicator that can provide important information on the evolution of the earth’s atmosphere through geochemical analysis of its cycles. Iron’s wide use in modern industries has given high economic relevance to iron ore deposits, which are formed by sedimentation, metamorphism, magmatic and hydrothermal processes. Over the last nine years prices have fluctuated between US$40 and US$140 per tonne. The economic value of iron deposits depends on a series of factors such as volume, purity, associated economic minerals, cost of production, concentration, and the elimination of noxious elements. Some other aspects that have to be considered are transportation costs of bulk materials to the processing plants and to the ports for their export, as well as potential environmental remediation costs during the production stage and mine closure.

For Cerro de Mercado in Durango, the first geological genesis theory was elaborated by Federico Weidner in 1858, whose thesis was that the ore deposit was the result of volcanic eruptions. Later, it was considered that the deposit was formed as dikes, but other geologists described it as a formation of metasomatic contact. In 1995 Jenaro González-Reyna explained the ore deposit as the result of magmatic segregation, while William Foshag believed it to be the result of hydrothermal replacements.

According to their age and geographical location, the iron ore deposits in Mexico are classified into two main groups. The first group originated in the Tertiary period associated to felsic igneous rocks, and is located in the north of the country and includes mines such as La Perla in Chihuahua, Cerro de Mercado in Durango, and Hércules in Coahuila. The second is located in the southwest of Mexico, situated on a parallel strip to the Pacific coast that crosses the states of Jalisco, Colima, Michoacan, Guerrero, and Oaxaca. It is part of the volcano-sedimentary sequence of the region. One of the most prominent characteristics of the ore deposits in the north is abundance of hematite with high values of phosphorous and low sulfur, while magnetite with high sulfur and low phosphorous prevail in the ore deposits of the south. There are other iron ore deposits in the country that have limited economic value, such as the banded sedimentary deposits related to submarine volcanism like La Prosperidad in Baja California Norte and La Hueca in Michoacan.

The development potential of Mexico’s iron deposits is positively impacted by its average grades, depths, and extensions. One of Mexico’s advantages compared to other countries, is that iron ore deposits are of high quality and relatively easy to exploit and transport since they are located near steel production centers, and close to the main maritime ports for export. 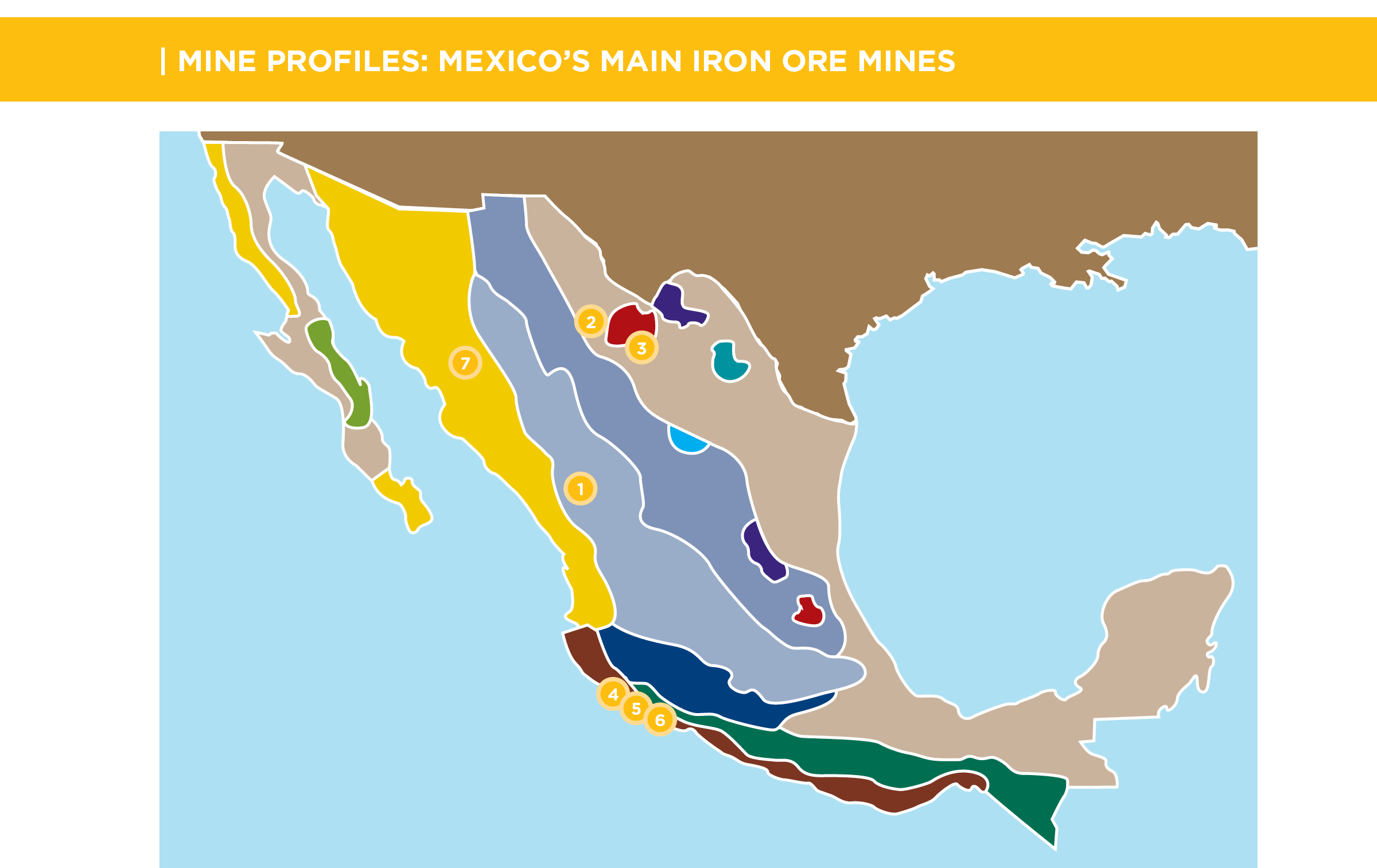